As Germany celebrates the centenary of the influential art movement, we tour the cities where it started, flourished and, ultimately, proved too ‘degenerate’ for the Nazis Under a leaden winter sky, the low-rise residential blocks in Berlin’s Hansa Quarter couldn’t be called pretty. Built in the late 1950s to revive a district razed during the second world war, they’re boxy and unadorned. The trees are skeletal, the gardens bare. But when I look up, I see upkeep and pride. Smart furnishings are visible through large windows. My eyes wander to a sleek, white edifice by Finnish architect Alvar Aalto and then down to ground level and some single-storey atrium houses by Danish designer Arne Jacobsen. A bold pillared building by Oscar Niemeyer is about light and space as much as housing.

At the quarter’s heart – physically and symbolically – is a concave “slab” residential block named after Walter Gropius, the architect who gave the world Bauhaus, one of the most influential art and design schools of the 20th century. In the 1919 Bauhaus Manifesto, he declared: “Together let us conceive and create the new building of the future, which will embrace architecture and sculpture and painting in one unity and which will rise one day toward heaven from the hands of a million workers, like the crystal symbol of a new faith.”

Without Bauhaus, neither Hansa-style social housing nor modernism as we know it would have happened.

This year, many German regions and towns are celebrating Bauhaus’s centennial, with exhibitions, lectures, performances, workshops and even “blind dates” for arty conversation. Berlin will be the hub, but there are Bauhaus buildings all over Germany and the movement’s legacy stretches as far as Chicago, Tel Aviv, São Paulo and Melbourne.

Though it only lasted from 1919 to 1933, in those 14 years Bauhaus ushered in a truly modern way of thinking about arts and crafts, the public realm, urbanism and the union of form and function.

Guide and curator Bettina Güldner takes me to the Hansa blocks to highlight Bauhaus’s radical social value. But she points out the influence of Gropius’s ideas all over Berlin, in shopping arcades, a church, office buildings, the Berlin Airlift memorials and even my hotel, the Ellington. Berlin is home to six Unesco-listed modernist estates. The ADGB Trade Union School in Bernau, 10km north-east of the city, is also Unesco-listed for its dual importance to Bauhaus and “classical modernism”. They all share a pared-down, uncluttered elegance, and a proud, open faith in modern materials. Güldner tells me: “There was no need for embellishment or overcrowding. Buildings could be newer and better, without copying anything that had already been. Beauty was born out of finding a solution to the question: what is useful?”

An express train takes me to Weimar, 280km south-west of Berlin. The founders of the Weimar Republic met there (also in 1919) because the city was as politically neutral as was possible in post-first world war Germany. They hoped for spiritual guidance from Weimar’s intellectual ghosts: former residents include Goethe, Schiller, Nietzsche and Liszt.

It doesn’t take an imaginative leap to grasp that Bauhaus was at least as revolutionary as republicanism in 1919. The old town is staid and stately: 12 of its mainly baroque buildings are Unesco-listed as “Classical Weimar”. Less than 15 minutes’ walk away is the Haus am Horn – a pioneering “white cube” that hosted the first Bauhaus exhibition, in 1923. Squat and flat-walled, sober verging on drab, this “test house” has its own Unesco listing.

Weimar’s Bauhaus circuit leads back from Gropius to Belgian architect Henry van de Velde, whose innovative designs for the city’s main art and crafts school (now a university) and private residence, Haus Hohe Pappeln (the House of High Poplars, though the trees are long gone), were important precursors of modernism.

It’s possible to do as I did and visit the sites independently, but Weimar university students offer guided walks (from €4pp) several times a week. On 6 April, the new Bauhaus Museum Weimar (from €3.50-€ 11) will open beside the bombastic Nazi-era Gauforum buildings. 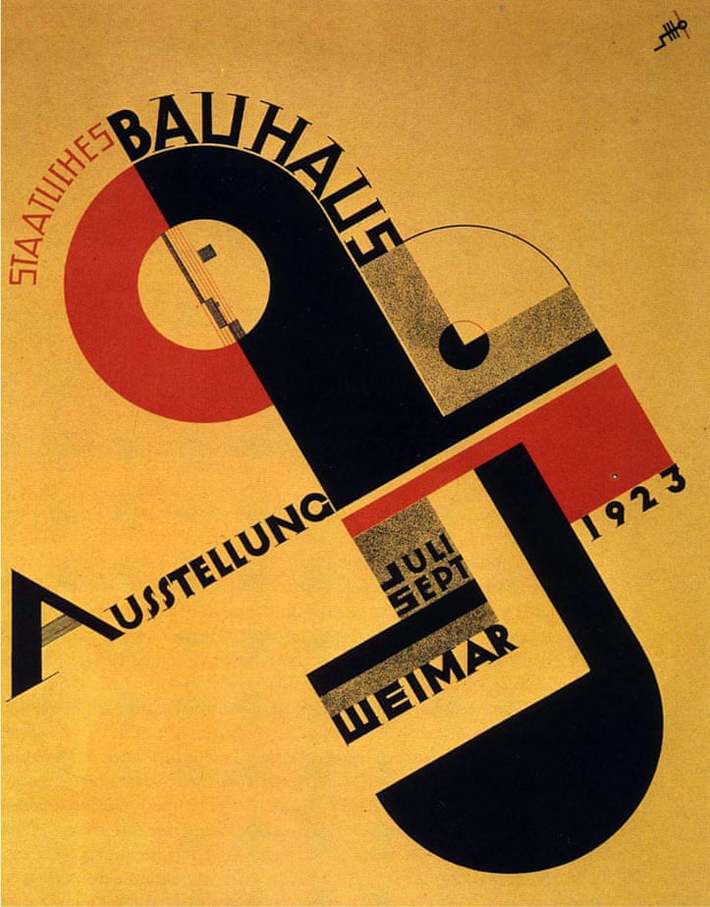 As the 1920s wore on, Weimar became increasingly conservative and, in 1925, Gropius moved Bauhaus 130km north-east to Dessau. Home to the Junker aeroplane factory, this city had a strong tradition of industrial design and it was here the movement reached its apogee. A short walk from Dessau’s main station is the movement’s radical-looking glass-fronted HQ, the Bauhaus Building. Commissioned by the city, it was designed by Gropius and built in 1925-26 to house the various departments of a school that taught everything from furniture design to architecture to typography.

Its exhibition space is small but excellent, with a stylishly edited silent film telling the Bauhaus story, running through its main innovations and leading lights. The names of Paul Klee and Wassily Kandinsky may be familiar, but Hannes Meyer and Laszlo Moholy-Nagy are revered in design circles. In an adjoining room are seminal lights and furniture, and cardboard maquettes of buildings as well as abstract forms. Photographs of theatre and musical gatherings suggest the Bauhaus era was full of edgy Dadaesque fun as well as commitment to craft. 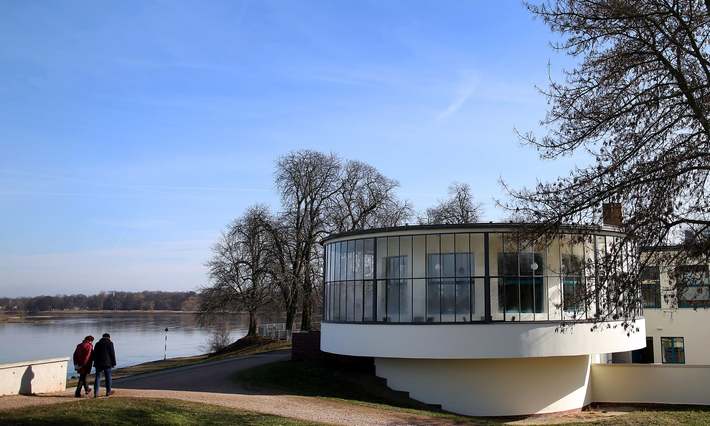 Round haus … designed in 1929 by Bauhaus architect Carl Fieger, the Kornhaus restaurant is on the River Elbe near Dessau. Photograph: Ronny Hartmann/Getty Images

A nearby cluster of plain white concrete buildings are enlivened by nothing more than glass and grey steel. These were the seven “masters’ houses”, the homes-cum-studios of Bauhaus teachers, now exhibition spaces and studios for working artists. Outside the city are Hannes Meyer’s five “deck-access houses” (it sounds better in German) – an important early example of social housing with communal spaces. There’s also a Bauhaus-designed restaurant, the Kornhaus, that serves non-minimalist pub food.

The shop at the Bauhaus is a joy – a place where it’s easy to blow €100 on cups, posh pencils and an arty pinny. But Dessau is getting a new museum later this year: Bauhaus Museum Dessau opens in September, with plenty of space to show the 49,000-plus objects in its collection. The Bauhaus will remain open, and has just refurbed a hotel section, where avid fans can sleep in cell-like bunk rooms (textile artist Anni Albers was among those who once lived there). 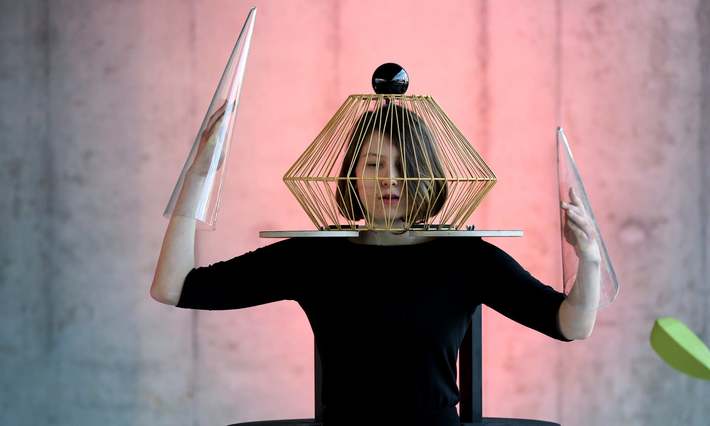 The final frames of the silent film are titled The Last Party. In September 1932, jackboots stomp all over the utopian social project , and it relocates to Berlin. Now under the direction of Ludwig Mies van der Rohe, it would only last seven months. The capital’s main collection, the Gropius-designed (but much-modified) Bauhaus-Archiv in the Tiergarten, is closed for a major revamp – and will stay that way for four years. The official reason is: “To celebrate the centenary of the founding of the Bauhaus in 2019, the Bauhaus-Archiv/Museum für Gestaltung is being renovated.” I sniff a very un-German cock-up. A “temporary exhibition” turned out to be a tiny shop near Zoo station.

But I would certainly recommend a Bauhaus-themed tour of Germany this year. In Thuringia, the towns of Erfurt, Gera and Jena all have architectural landmarks. Bremen, Frankfurt, Hamburg, Magdeburg, Münster and other cities have houses, factories, dams, foundries and garages built by Bauhaus-influenced modernists (see grandtourofmodernism.com for an interactive map).

Many people go to Berlin to eat sausages, drink lager and gawp at what’s left of the Wall. They might add on a trip to related exhibitions portraying life in the DDR or the Spy Museum. Bauhaus, by contrast, is not merely a past movement; it is a force in the present day, offering nuanced insights into German life and art. In art books, modernism is usually presented as rootless, but much of what we now think of as new has its roots in Dessau and Weimar.

“I think Bauhaus was a very German phenomenon,” says Bettina. “We were very late to industrialise. It responded to a need to re-educate craftsmen and catch up with France and the UK. The first world war had destroyed nationalism of the imperial kind and 1919 was a new dawn.”

• The trip was supported by the German tourist board. See bauhaus100.de for more information. Original Bauhaus: the Centenary Exhibition runs from 6 Sept to 27 Jan 2020 at the Berlinische Galerie in Kreuzberg. Direct Deutsche Bahn trains run Berlin Hbf-Dessau (from €19.90); Weimar-Berlin usually involves a change at Erfurt (from €29.90 bahn.com); Dessau-Weimar may involve 2-3 changes (from €19.90)

Bauhaus is one chapter in the modernism story. To broaden your trip, check out these masterpieces The Nazis condemned cool contemporary architecture as “degenerate”, but architect Ernst Sagebiel, a party member, had no qualms about mixing modernist features and monumentalist details when designing this iconic airport terminal. Begun in 1936, it was never completed because of the war, but its natural stone facade still shimmers and the interior is lofty and lyrical. Used during the Berlin airlift, Tempelhof closed in 2008; some sections are used as a refugee camp. Book a tour at thf-berlin.de (€15).

Fagus Factory, Alfeld on the Leine Built by Walter Gropius and Adolf Meyer in 1911, the Fagus shoe-last factory in Lower Saxony is one of the earliest works of modern architecture, and Gropius’s first major project. The Unesco-listed building’s glazed facade and “rectilinear volume” inspired a thousand UK factories, not to mention tower blocks and state schools. Almost 4,000 tons of bombs were dropped on Dresden in just three days in February 1945. A rare modernist survivor, the German Hygiene Museum was built between 1927 and 1930 by Wilhelm Kreis. The overriding style is neue sachlichkeit, or new objectivity, with the emphasis on functional, pared-down features, opposed to the excesses of expressionism. The entrance to the Grassi Museum. Photograph: Alamy

Known for its Renaissance and baroque core and, at the other extreme, Communist-era “slab” public housing, Leipzig also has important modernist buildings, including suburban residential and church architecture of the 1920s, eye-catching museum buildings and enlightened town planning. Any tour has to include the Grassi Museum complex (combining Neue Sachlichkeit with art deco), the Augustusplatz city square (for its ghosts as much as what remains), Stötteritz housing development and Crystal Palace-inspired Leipziger Messe (Trade Fair), built in 1993-6. Built in 1908-9 to designs by architect Peter Behrens and engineer Karl Bernhard, the Turbinenfabrik is considered the first successful application of modernist stylistic elements to an industrial building. Glass and steel were used in place of stone and chisels, and nothing about its function or form is hidden from public view. Contemporaries dubbed it the “machine cathedral”.