If Arabs Were Germans and Israel's Frontiers Were the Berlin Wall 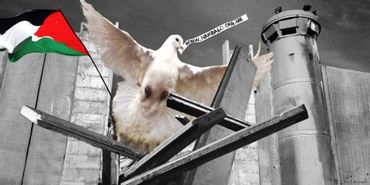 On June-5-2011 the Palestinians commemorated the Naksa day, the 44th anniversary of what is known as the “Six-Day war” Israel occupied the Gaza Strip, the West Bank, Jerusalem's Old City, the Golan Heights, lands from Southern Lebanon and the Sinai Peninsula and parts of the Jordan basin in the Jordanian side.

The Palestinian refugees together with Arabs and international solidarity activists marched a rally toward 1967 boarders emphasizing their right of return to their land which they were expelled by force and ethnic cleanings.

Palestine "has been under criminal occupation for 44 years. During that time, (Israel) committed the worst crimes against humanity, violating every international instrument. The occupier has killed tens of thousands of our struggling people, most of them defenseless civilians. There have been over 800,000 instances of imprisonment. Tens of thousands of people have been injured," 30% left with permanent disabilities. Moreover, thousands of homes, crops, and other property have been destroyed.

In West Bank Palestinians gathered at the Qalandia checkpoint between Ramallah and Jerusalem were met with tear gas and rubber coated bullets, hundreds of them were injured.

Submitted by Ali Abunimah on Sun, 06/05/2011 - 19:20
This video shows confrontations that took place on 5 June on the Israeli-occupied Syrian Golan Heights as thousands of people marched from the Syrian-controlled side toward the fortified Israeli-controlled line. Watch carefully.


The images are shot from the from the perspective of Syrian residents of the town of Majdal Shams who have lived under Israeli occupation since 1967.

As Israel and its apologists describe these events, Israel is “defending itself” against “infiltrators.” Media reports citing Syrian sources say that up to 20 people may have been killed and dozens more injured by Israeli fire. Videos posted earlier show Israelis firing and marchers evacuating wounded people.

But what this video clearly shows is ordinary people challenging the violent and illegal division of their homeland. The people are united on both sides of the line. It is the Israeli line that separates them. The Israelis are the infiltrators.

For decades the people of the Golan Heights have steadfastly maintained their family and community connections. Famously they would gather on hilltops and deliver news to each other across the frontier via megaphone.

In Majdal Shams, the largest Druze village in Golan Heights on the Israeli-Syrian border, the Druze bride Mona is engaged to get married with Tallel, a television comedian that works in the Revolution Studios in Damascus, Syria. They have never met each other because of the occupation of the area by Israel since 1967; when Mona moves to Syria, she will lose her undefined nationality and will never be allowed to return home. Mona’s father Hammed is a political activist pro-Syria that is on probation by the Israeli government. His older son Hatten married a Russian woman eight years ago and was banished from Majdal Shams by the religious leaders and his father. His brother Marwan is a wolf trader that lives in Italy. His sister Amal has two teenager daughters and has the intention to join the university, but her marriage with Amin is in crisis. When the family gathers for Mona’s wedding, an insane bureaucracy jeopardizes the ceremony.

The divided condition of Syrians – as well as Palestinians of course – is not unlike that of Germans or Berliners divided between West and East from 1945 to 1990. It is the brutal intervention of a forced partition that victimizes them. I see the Syrians of the Golan and the Palestinians marching to the frontiers of their country in the same light as the people who tore down the Berlin Wall.


That is not of course how they are presented by Israel and its apologists in the Western media who rarely question Israel’s description of them as faceless and dangerous “infiltrators” coming to violate Israel’s “sovereignty.”

Thank you for the Post, Eva.
I'd like to respond to one point only, which must be clarified:

When the Syrians were approaching the Israeli border, and then crossed it, they became instantly in  status of "enemy that is carried into the neighboring country"  and should take into account they would be shot .  No country will be indifferent in front of an enemy that enters its sovereignty ..They came in a big mass, while Israel wasn't even ready :(:(:(

So, peace activist as I am, I cannot justify the Syrian act, nor condemn Israel react.
The Syrian guys who succeeded to arrive Jaffa and Tel Aviv, had been treated very nice and civilized way, and were sent back to their country. Btw - I do not know what has been done to them in Syria...

Happy holiday ( it is  Pentecost  eve)

Thank fot the post, eva.
I don't know what to do; except being faithful in Humanity and in the power of Love ...
The film seems to be inpiring.
Love and Peace for all Beings.