My Dreaming Brought Me Home - By Uncle Bob Randall 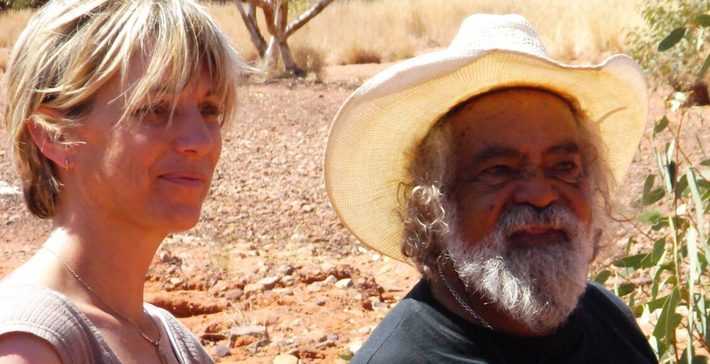 My name is Bob Randall. I am Anangu, a tjilpi (elder) from the Yankunytjatjara and Pitjantjatjara Nations. I am one of the listed traditional keepers of Uluru, the great red rock that lies at the very heart of Australia in the central Western Desert region. As an Aboriginal man, I am a member of probably the oldest culture in the world.

I’d like to tell you the story of a little boy who was taken away from everything he belonged to at the age of six—away from all that he knew and all that he loved, away from what bound him to this ancient culture and all his ancestors. You see, he was one of the thousands of Aboriginal children later known as the Stolen Generation.

He was born some seventy-five years ago at a place called Middleton Ponds near Angus Downs Station, 300 kilometres northeast of Uluru. His mothers walked there in the twenties’ drought period, when all the waters and waterholes were drying up at Kata Tjuta and Uluru. They walked on the banks of Lake Amadeus towards Kings Canyon, then followed the canyon, because there was permanent water there, and ended up at a cattle station run by a Scotsman, Bill Liddle. Bill Liddle became this little fella’s biological father. He was a kind man and treated the Aboriginals on his station with respect. The little boy’s mothers looked after the sheep and goats; his fathers looked after the cattle, camels, and horses. It was into that environment this boy was born and lived by the traditional Aboriginal ways.

To understand what it was like to be taken from all to which one belongs, you have to understand the system of connection that has supported my people for over sixty-thousand years. Belonging to all things was and is our way of life. And it was how the little boy was raised, living with his mothers and fathers, aunties and uncles, grandmothers and grandfathers at Angus Downs station.

A Yankunytjatjara child has many parents, not just two. Every sister of his birth mother is his mother. Every brother of his birth father is also his father. This is one of the lines—called the biological- or blood-line—of my people’s family relationship system. There are, in fact, many more lines of relationship.

Another line of relationship is our kinship, or ‘skin’ system. This system relates people who share a particular language, and governs social behaviour, especially with regards to marriage, but also with other social protocols.

Then we have the ceremonial line. Ceremonial rights determine family relations. For example, let’s say my mother went through her ceremony with six to 20 other girls. Through the ceremony they become sisters; so they then become mothers to me in the same sense my mother is a mother to me.

As an Aboriginal person, you belong to much more than just your human family. Another relationship line is the totemic connection to country based on the song lines, or stories, from the Tjukurrpa (Dreaming) period. A totem is the link between the spiritual and physical through land. Wherever a child is conceived or born determines the totem of that person. Tjukurrpa is the time of Creation, including the past, present, and future. It is fixed; it cannot be changed from that time of Creation; it was, it is, and it always will be.

These Dreaming trails, the song lines, the story tracks, criss-cross Australia in every direction. The Dreaming creatures moved across country, creating the topography of the landscape we see today. The knowledge of that relationship is passed down through ceremonies and family members to their children. This is what forms the biggest relationship connection system throughout this continent, because it relates every single Aboriginal nation. Even though some 500 – 700 Aboriginal nations once existed,3 each with their own systems of government, languages, cultural practices, religions and traditions, these Dreaming story lines connected everyone into one family.

My people’s totem is the ancestral being Kuniya, the carpet snake, who created that part of the land on which we reside. She travelled from the east, from the direction of the sunrise right to Uluru. You can just imagine her moving across the country, shaping it with her curves and bends like the rivers across the continent. As an Aboriginal person, you belong to every other living thing on that totemic line, which is 50 to 100 miles or more wide, and many hundreds of miles long. Now some people may be from outside of that line, but they’ve married in, or their family married in, which has connected them into that family.

Through this system, this little boy was related to every plant, every reptile, every bird, every insect, every grain of sand, every rock, every waterway, from the tiniest to the largest organism, even the mountains, and everything that was on his totemic line. They belonged to each other.

There is also the relationship line of Country. We say ‘Countrymen’. This includes what nation one belongs to. This line connects us to another few hundred people as family members. This is what we refer to as the extended family system. And remember, we are related to every other living thing that is in our country as well, not just humans!