Not on our bodies anymore

Violence against women is on the rise in Bengal, but the state authorities are dismissing recent cases of sexual assault as ‘conspiracies’ by ‘liars’. What really has changed since the Mathura rape case 30 years ago, asks Rajashri Dasgupta 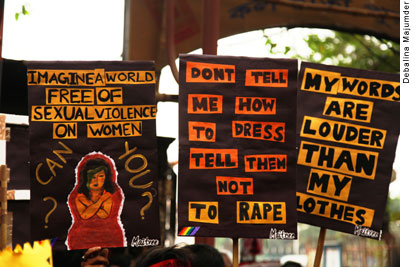 Bold. Defiant. Confident. Challenging and in-your-face. The women marched through the crowded streets of central Kolkata. They marched silently, yet they simmered with energy and anger. Pedestrians stared, and the busy Monday evening traffic slowed down, as hundreds of women and young girls dressed in black carried protest placards and banners.  Fresh-faced students of schools and colleges, working women, women from grassroots rural Bengal, urban intellectuals, NGO activists and feminists, and a spattering of men, were out marching, to voice a strong message: Enough is enough! The huge banner leading the silent but determined procession on March 19 explained it all: March Against Rape and Sexual Harassment.Women of Bengal are no longer in the mood to tolerate the widespread sexual violence in the state that threatens to erode their self-respect and freedom.

Bystanders reached out eagerly and read the leaflets the protesters distributed.  No! Not on Our Bodies Anymore,the leaflet read, conveying the mood of the marchers against the series of attacks on women in Bengal in the last few months. The urgency of the event, organised by Maitree, a network of autonomous women’s groups and women’s rights activists, could not be missed. In February alone, nine cases of rape were reported, and this apart from other forms of sexual assault on women.  In early-March, a policeman was beaten to death when he protested against some boys harassing his niece.

It was significant that the march began in the historic College Square, in the precincts of the prestigious Presidency College that has also witnessed several radical student movements, and the dilapidated, noisy and historic Coffee House where angry poets still continue to draw inspiration, and where many revolutions have been dreamed of and wrought.  With assertive and provocative banners that read, Events bring home how unsafe it is for women to move around in Bengal. Do you care? and Your Crime, My Shame?the gathering had an air of audacity and determination.

“I am participating because I am angry. I dare to move around wherever I wish, at whatever time I want,” says a defiant 25-year-old Mirna Guha, an activist, her face painted with ‘No Means No’. “I will dress as I please, as I choose. We will dance in nightclubs and eat in restaurants and enjoy the parks.” In contrast,  Malati Sammadar (name changed) who has travelled from the outskirts of Kolkata to join the protest, looks worried. Says Malati, “There are so many strictures already on us from the family. Now if the government also imposes rules and casts aspersion on our character, it will make our lives even more difficult when we go out to work.” Malati’s face, lined with tiredness, makes her look older than her 40 years, and tells a story of innumerable struggles. “It will take me more than two hours to get back home to Baruipur. If the administration does not provide safety, it will be difficult for working women from the outskirts to work freely.”  Both Mirna and Malati depicted the mood of the protesters, expressing the concern voiced by women.

When sexual assault on women is treated as a political game for scoring points, the crime becomes politicised; the suffering of the rape victim is completely bypassed in the process; her traumatic experience becomes merely a political tool in the hands of opposing parties ever-ready to embarrass and discredit each other. In West Bengal, with the bitter polarisation of political parties, this is what  women facing sexual violence are experiencing. Going by the alarming data on all forms of sexual violence in the last few months, the new state government claiming paribartan(change) as its motto has not ushered in any change in the  situation of women.

What has been most humiliating and objectionable to rights activists is the response of the state machinery and administration to sexual assault on women. It not only reflects the cynicism and gender bias in institutions of power, but also political exigency.  In February, a 37-year-old mother of two reported to the local police that she had been gangraped in a moving car in Park Street, the heart of the city. To add insult to injury, instead of filing her complaint, the police humiliated her and made crude remarks. To the citizen’s shock and dismay, instead of ordering her police to ensure a thorough and quick investigation, even Chief Minister Mamata Banerjee accused the rape victim of “conspiracy” and “concocting” the crime to embarrass and malign her new government. As if on cue, both a senior minister and the police commissioner dismissed the incident as “stage-managed”.  Incidentally, within a few days, the commissioner’s own team arrested three accused in the Park Street complaint and medical evidence showed sexual assault. But the chief minister did not apologise to the woman for her misjudgement.

It is not only women in middle class urban Kolkata who bear the label of “conspirators”; poor rural women too face the ire of the administration. In Katwa, Burdwan district, a woman was dragged out of a train and raped in front of her daughter; her neighbour, a Trinamul supporter, helped her file a police complaint. Even before the police could complete the investigation, as in the case of the Park Street crime, Mamata Banerjee termed the crime on the seamstress “stage- managed”; unconfirmed reports say that the Trinamul supporter lost his party membership for his good neighbourliness.  On March 16, the Association of Women with Disabilities and other disability activists came out on the streets to protest the rape of a deaf and mute girl by a doctor in a hospital in Bankura.

Ironically, Maitree activists point out, it was Mamata Banerjee who, before coming to power, had vigorously and unquestioningly championed the cause of women who had been sexually assaulted. During the struggles in Nandigram and Singur against land acquisition, women were assaulted, abused or raped in clashes between the ruling CPM and protesters. At that time, Banerjee did not hesitate to take up the case of 16- year-old Tapasi Malik (who was brutally raped and killed in Singur in December 2006, at the peak of the farmers’ resistance to Tata’s Nano car factory on rich farmland) or Radha Rani Ari who was gangraped in Nandigram to silence people’s protest against land acquisition. In both cases, CPM leaders and local goons nurtured by the ruling party were implicated and shown up as making sexually suggestive comments about the women victims and their families.  During Left Front rule between 2004-2010, Bengal recorded the second-highest incidence of rape in India and ranked second-lowest (2006-2010) in the rate of conviction.

As the incidence of crime and its reporting increases, the backlash against women has become increasingly vicious; people of Bengal have witnessed the ridiculing and branding of victims of sexual assault as “liars” by political parties, their leaders and supporters. Across the political spectrum, the focus of the parties has been to cover up the crime to protect and safeguard their image, not to deliver justice to women. More than 30 years ago, the contemporary women’s movement in India emerged following rapes that triggering nationwide outrage and led to the amendment of rape laws after 100 years. The movement had sharply opposed the notion that provocative dressing by women provoked male violence; activists also held that reference to the sexual character of the woman victim was immaterial in case of sexual violence.

But as they say, the more we move, the more we seem to remain in the same place. Women in other parts of India are battling similar crimes, prejudices and blamegames. In Gurgaon, when a bar employee of Sahara Mall was abducted and gangraped, the administration’s response was predictable: women should not work after 8 pm. Women in Gurgaon and Delhi protested against these pseudo-protective strictures by pouring out into the streets in the evening in a street- bharo andolan.  One placard read, Keep Men at Home by 8 pm!

Since the Trinamul party came to power in June 2011, the new government’s attitude towards women who face sexual assault has not changed. Taking his cue from the chief minister, state Transport Minister Madan Mitra shrewdly deployed insinuations about the Park Street complainant’s personal life by enveloping the event in ‘morality’ and emotion to raise doubts about the crime and discredit the complainant.  During a discussion on a TV channel, Mitra asked dramatically: “I believe the woman has two children at home, is she separated from her husband? Then why did she go to a nightclub and drink?”

Similarly, in another recent case, when a woman ragpicker was brutally raped and left bleeding to death, the instant response of a police officer was to question why the woman was moving around in an area that was known to be unsafe. “How can the police term certain areas not safe for women? Do we assume then that the police have issued a free-for-all to anti-socials in certain areas and at certain times? It is the responsibility of the police to ensure people’s safety,” says activist Mira Roy.

Statements casting aspersions on women’s character, especially by political leaders and state administration, send the wrong signals to society. Not only do they undermine the gravity of the crime, they actually legitimise police inaction against such crimes and hamper proper investigation. From the societal perspective too, activists feel, the attitude of suspicion and hostility regarding crimes of sexual assault only shame the victims further into silence, discouraging women who have to overcome the hurdle of social stigma itself before attempting to seek justice.

The repeated comments of the Bengal chief minister -- who came to power with a huge popular mandate -- that the women in her state make up stories of sexual assault does not portend well for the women of the region.  The March 19 demonstration of anger in the heart of Kolkata is a signal to the administration and political parties that women in Bengal dodare to protest. They have simply had enough.

Every man is living because a women carried him in her womb. How can men forgot this ?

Compassion, Love and Peace for the raped women and all Beings.