"Blues legend B.B. King, who took his music from rural juke joints to the mainstream and inspired a generation of guitarists from Eric Clapton to Stevie Ray Vaughan, has died in Las Vegas. He was 89.

King, inducted into the Rock and Roll Hall of Fame in 1986, had said in May he was in hospice care at his home after being hospitalized in April with dehydration related to diabetes.

"The blues has lost its king, and America has lost a legend," President Barack Obama said in a statement, recalling how he sang "Sweet Home Chicago" with King at a White House blues concert three years ago. "B.B. may be gone, but that thrill will be with us forever. And there’s going to be one killer blues session in heaven tonight."

King's death was confirmed late on Thursday on a Facebook page linked to the website of his daughter Claudette.

"Being a blues singer is like being black twice," King wrote in his autobiography, "Blues All Around Me," of the lack of respect the music got compared with rock and jazz.

King will forever be associated with his trademark black Gibson guitars, all of which he christened "Lucille" in recollection of a woman who two men fought over in 1949 in an Arkansas dance hall where he was playing.

The men knocked over a kerosene lamp, setting fire to the building. King risked his life to retrieve his $30 guitar.

In 2003, Rolling Stone magazine's list of the 100 greatest guitarists of all time ranked King at No. 3, behind only Jimi Hendrix and Duane Allman. 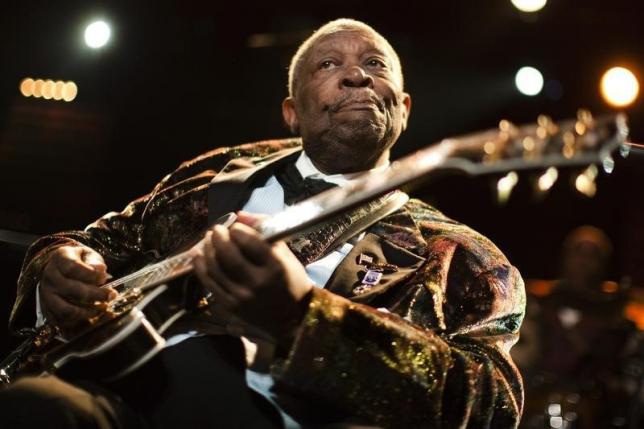