I had the great pleasure of discovering Emma Kisiel's work. She shared her touching and beautiful project, At Rest, during portfolio reviews at the Center of Fine Art Photography, just weeks before she was about to open her BFA Thesis Exhibition at the University of Colorado Denver (UCD) of the same work. 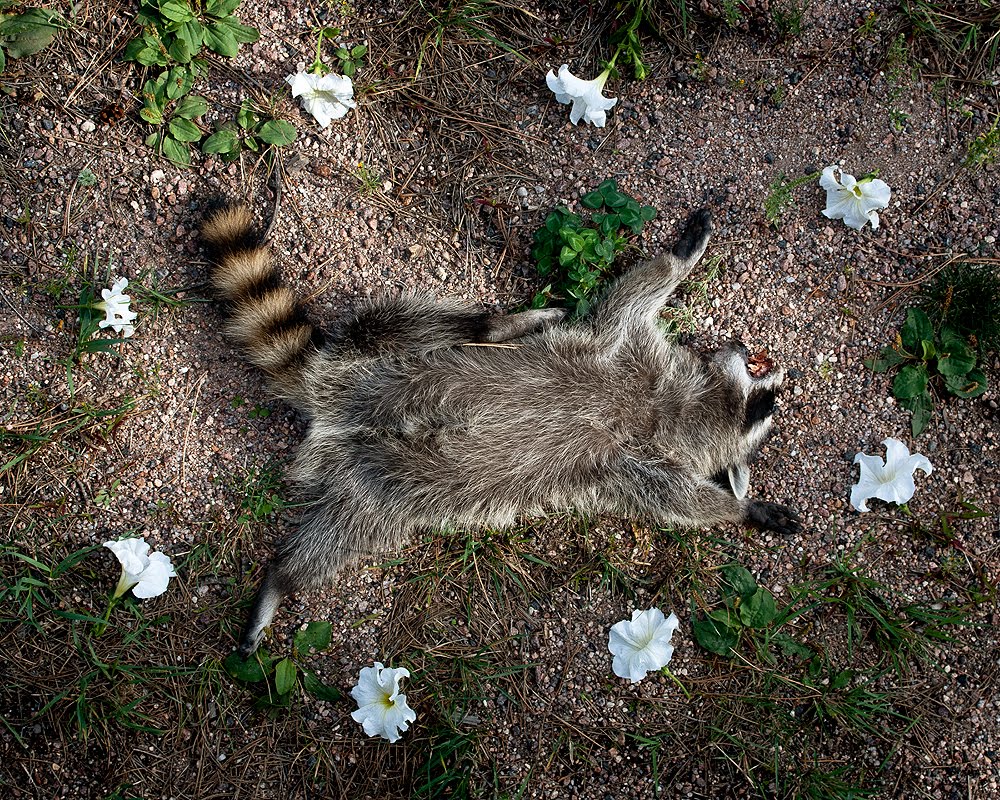 Born in Buffalo, New York, now living in Colorado Springs, Emma Kisiel's work focuses extensively on the human influence on animal life and documents her physical closeness to animals, both living and dead. The subjects of her series have included roadkill, animal shelters, the dog overpopulation problem on the Navajo Nation, animals in zoos, petting zoos, and pet stores, and taxidermy, dead animals, and animal parts in documentary and still life settings. Even as a child, Emma Kisiel was drawn to dead birds that would appear on her front lawn and roadkill she spotted while walking to the bus stop. She realized that the immobility and lifelessness of these animals allowed her an intimacy that she couldn't achieve with a living wild animal.

Emma Kisiel has had exhibitions in Manitou Springs, Fort Collins, and Denver, CO, and Baltimore, MD. Her photographs have also been featured online at Design-Freak, Design For Mankind, ShareSomeCandy, and RootSpeak. 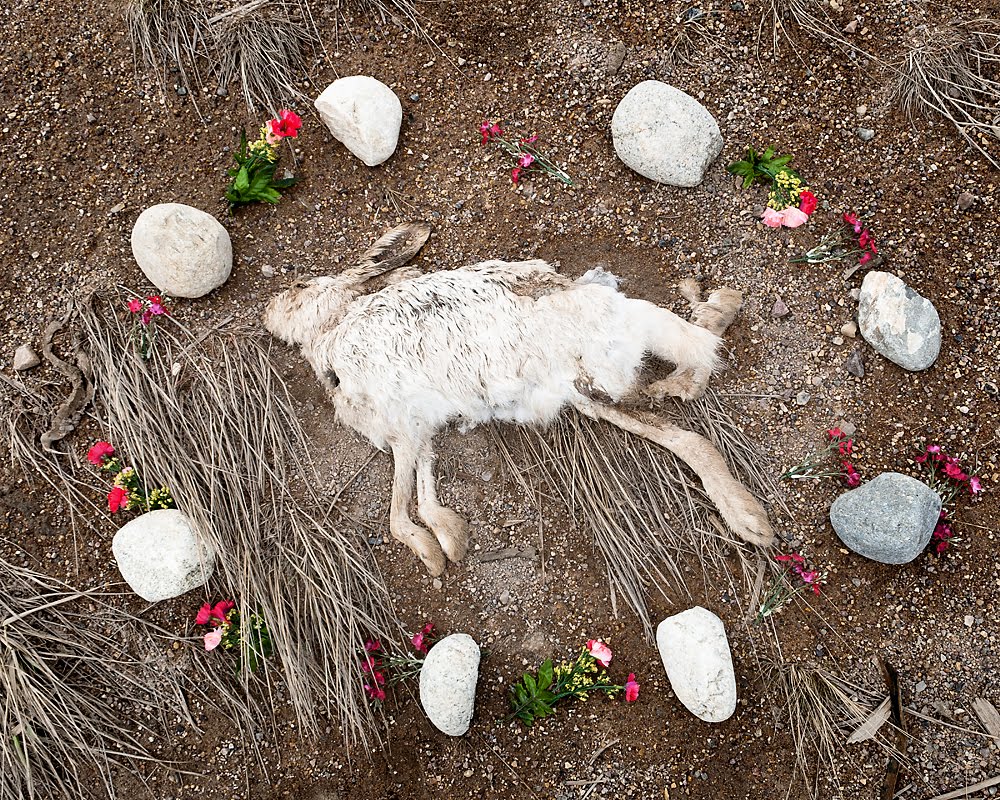 At Rest is a photographic series depicting roadkill on American highways and addressing our human fear of confronting death and viewing the dead. My images draw attention to the fact that, while man has a vast impact on animal and natural life, dominant American religions insist that animals do not have a place in Heaven and are, therefore, of little value in our society. To cause the viewer to feel struck by this truth, I photograph memorials I have built surrounding roadkill at the location at which its life was taken. At Rest expresses the sacredness to the bodies of animals accidentally hit by vehicles while crossing the road. 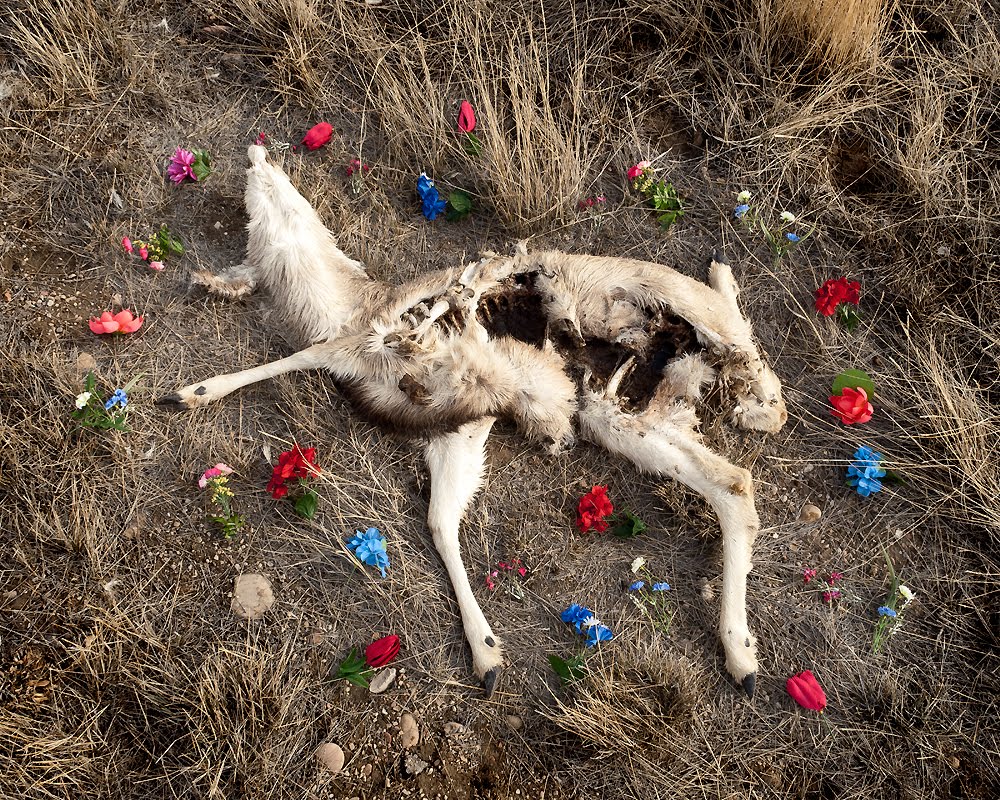 By surrounding the subject with living and fake flowers and stone markers, I elevate the often ignored and overlooked dead animal to the level of a human being and impart the beautiful grace of their fallen bodies. My photographs convey the sublime, the grotesque, and the lure of the macabre; we can hardly bear the visual of death, yet we cannot tear our eyes away. 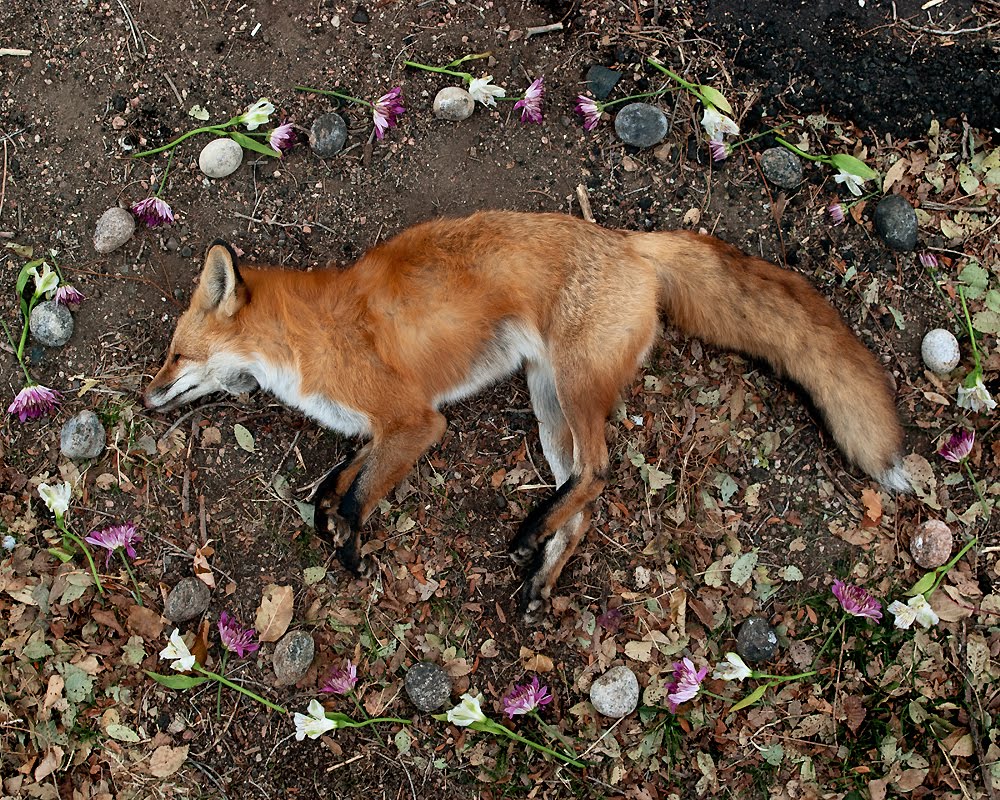 While working, I assume a practice similar to attending a funeral or visiting a grave. Quietly and peacefully, I assemble a memorial around the animal, considering shape, form, texture, and color. All planes in the images in At Rest are in focus, referring to the sacredness of all things. The lighting is natural; the warming light of the sun is an important factor in my roadkill grave setups. My animal subjects are not moved or altered. They are happened upon, visited with, remembered, and left to return to nature. 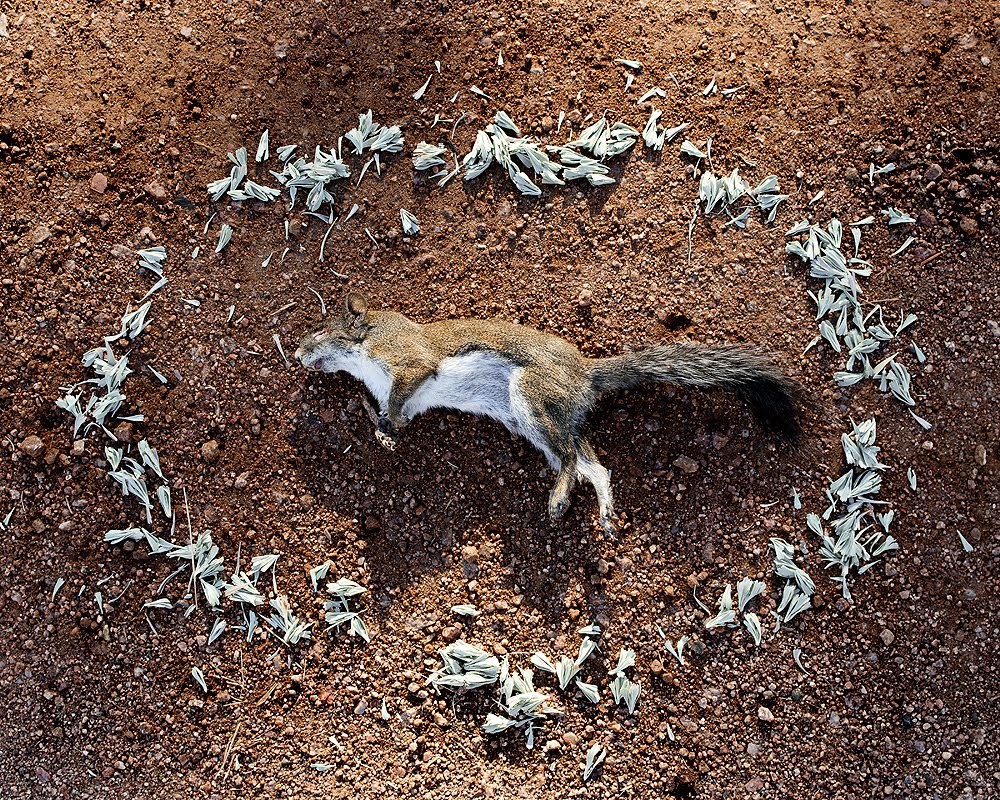 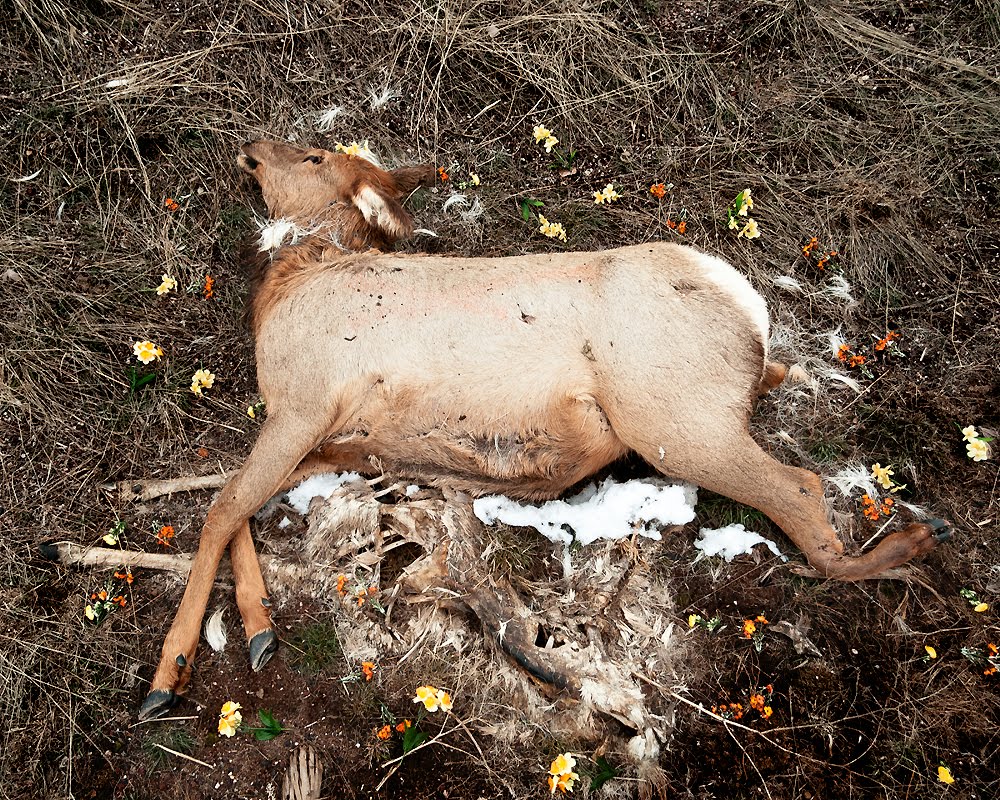 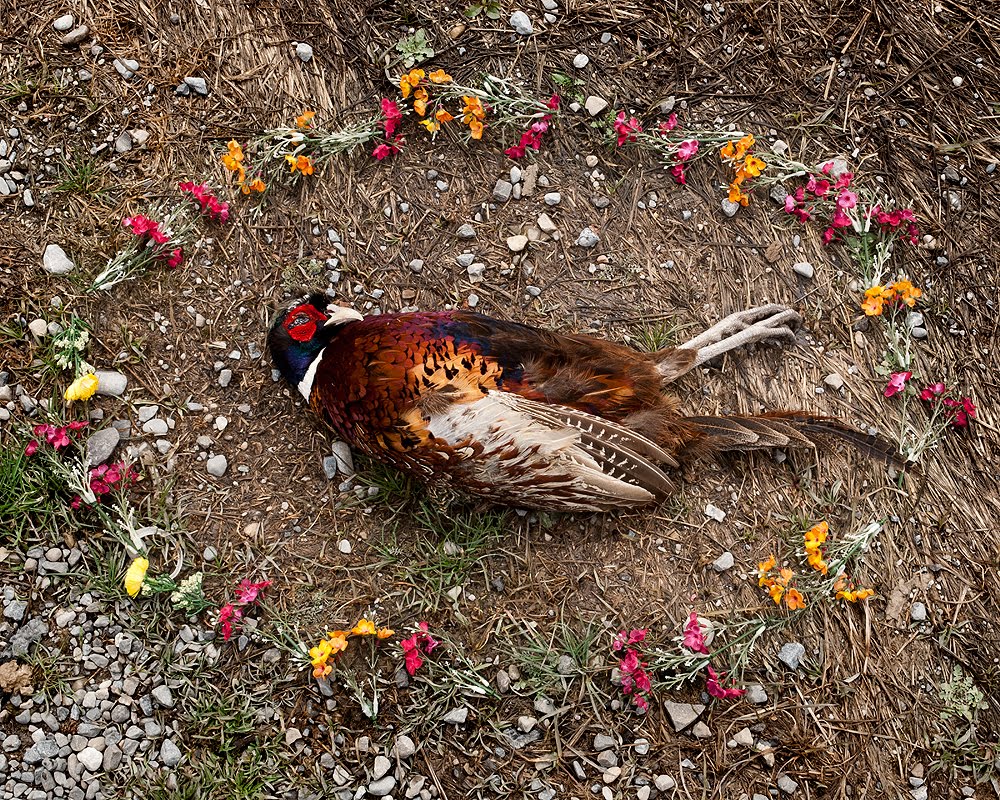 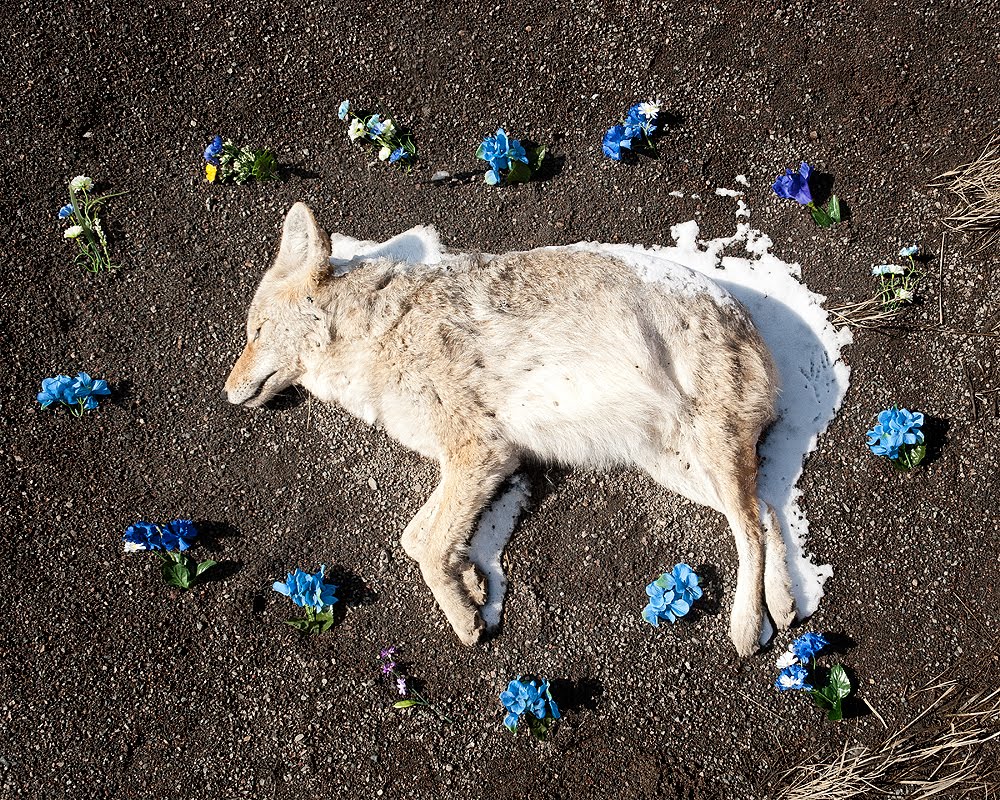 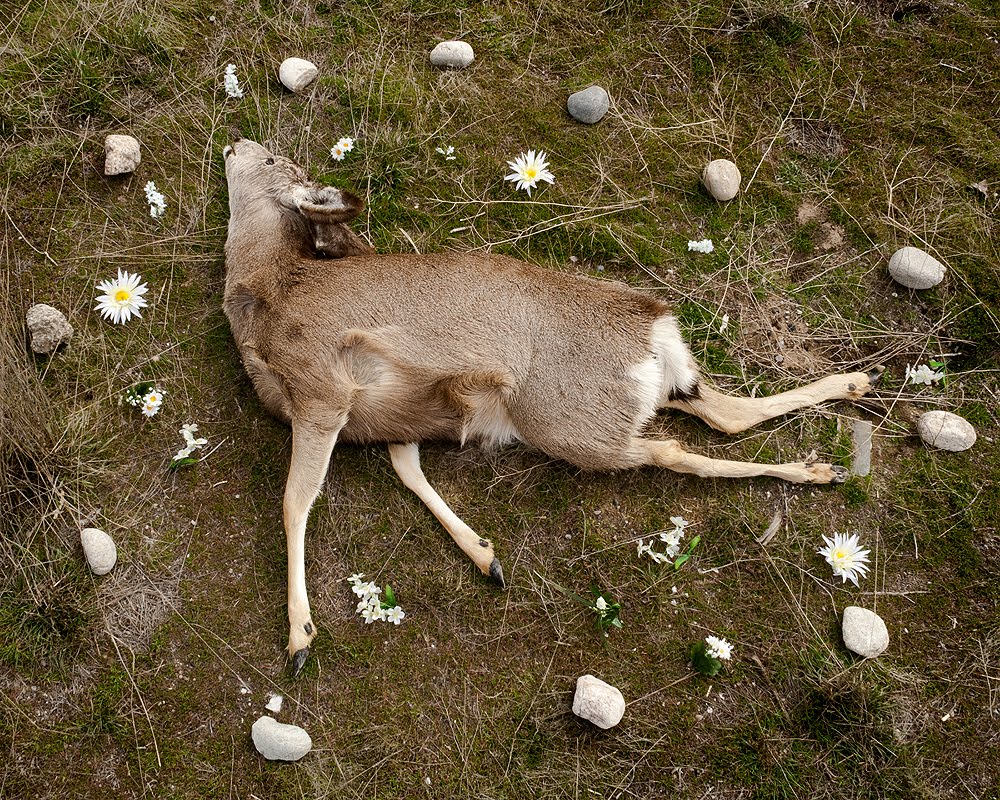 Thanks for honring animals and helping kids and grown-ups to be more confortable and pecefull with death.

Many years ago when I was 19, I did a pencil drawing of a dead pigeon on the road I walked on.  It still was beautiful similar to what your photos. 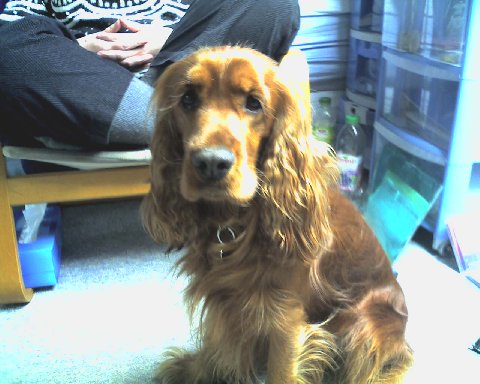 Here is my loving dog, still alive and wonderful as every creature (dead or alive)