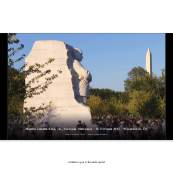 On Friday afternoon, January 13, 2012, the Martin Luther King, Jr., Research and Education Institute will hold its annual celebration of the King Holiday. This year’s event will highlight the Institute’s involvement in the recently dedicated King National Memorial in Washington, D.C. and last year’s Palestinian production of “Passages of Martin Luther King,” a play written by Institute director Clayborne Carson. The King Institute will present its Call to Conscience Award to photojournalist and civil rights activist, Bob Fitch and to several cast members of "Passages of Martin Luther King."  Palestinian actor Ramzi Maqdisi, who played “Martin” in the production, will be among those honored.

The King Celebration will take place from 3 pm - 5 pm at Tresidder Memorial Union, 459 Lagunita Drive, on the Stanford campus. The event is free and open to the public.  A reception will be held from 3 pm - 4 pm, after which Maqdisi and noted actor Aldo Billingslea of Santa Clara University will perform a dramatic reading of King’s "I Have A Dream” speech.  Cast members and Stanford alumnae, Aleta Hayes and Chelsi Butler, will provide vocal accompaniment for the reading. Internationally acclaimed vocalist, Kim Nalley, will perform accompanied by celebrated jazz pianist Tammy Hall.  Stanford student performances include the Chicago Collective with Jessica Anderson, Garry Mitchell, Kadesia Woods and Tyler Brooks and jazz saxophonist Waveney Hudlin.  During the month of January, a display in the Tresidder lounge will feature images by Bob Fitch. The Papers Project was established in 1985, when Coretta Scott King, founder and president of the King Center in Atlanta, asked Clayborne Carson to edit the papers of her late husband. Under Carson’s direction, the principal mission of the King Papers Project is to publish a definitive fourteen-volume edition of King's most significant correspondence, sermons, speeches, published writings, and unpublished manuscripts. In 2005, the King Institute was founded to sustain the Papers Project and its related educational initiatives.
For further details on the performers and updates on King Holiday events at Stanford, please visit our website athttp://www.kinginstitute.info

Me too.
But I kive in france.

So just my mind and heart will be there, but they really will. I would like so much to be there!!! But I'm in Brazil, anyway happy to know about it!!!