his family has announced.

Brian Haw's protest in London lasted for just over a decade.

Mr Haw, 62, set up a camp in London's Parliament Square in 2001 in protest against UK and US foreign policy.

In March 2011, a High Court ruling obtained by London's mayor forced him to move his camp on to the pavement.

In a statement posted on Mr Haw's website, his family said he had died on 18 June in Germany, where he had been receiving medical treatment.

They said Mr Haw, from Redditch, Worcestershire, passed away in his sleep in no pain.

An additional statement on his website from his campaign representatives said: "Brian showed great determination and courage during the many long hard years he led his Peace Campaign in Parliament Square, during which it is well documented that he was relentlessly persecuted by the authorities which eventually took its toll on his health.

"Brian showed the same courage and determination in his battle with cancer. He was keenly aware of and deeply concerned that so many civilians in Iraq, Afghanistan and Palestine did not have access to the same treatments that were made available to him.

"Parliament, the police, and courts etc, should forever be ashamed of their disgraceful behaviour towards Brian."

Andrew Burgin, from the Stop the War Coalition, said Mr Haw's death was a tragic loss.

"Brian was a fantastic inspiration to us all, a stalwart of the peace camp," he said. "We hope that his work goes on."

Labour MP Jeremy Corbyn praised Mr Haw for reminding MPs "of the consequences of their decisions".

Fellow Labour MP Paul Flynn paid tribute to the peace campaigner on Twitter, saying: "Brian Haw's 10 years of 24/7 protest in all weathers against the futile wars in Iraq/Helmand deserves the nation's thanks and admiration."

Labour's John McDonnell, who served as a character witness for Mr Haw when he was arrested, tweeted that he respected Mr Haw's commitment to his campaign for peace. 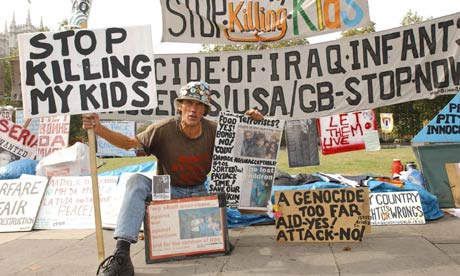 Brian Haw started his round-the-clock protest in Parliament Square in 2001, and his tent and collection of hand-written posters soon became a familiar sight. Photograph: Andy Butterton/PA

Mr Haw set up camp in Parliament Square Gardens on 2 June 2001, in response to sanctions against Iraq. His protest grew broader after the invasions of Afghanistan and Iraq.

Supporters at the camp have left his camping chair in place and his collection of bleak war photos at the site remains untouched.

Over the past decade, Mr Haw fought a lengthy battle with the authorities to keep his camp in place.

In April 2002 Westminster City Council began legal action under the Highways Act to remove his camp on the grounds that he was a "nuisance", but the case never came to court. It later succeeded in limiting the hours he could use a megaphone but failed in an attempt to remove his placards for "obstruction" and "unlawful advertising".

Legislation passed in 2005 banned unauthorised protests within a square mile of Parliament but Mr Haw's protest was initially ruled to be outside the Act because it had been established before it came into effect.

In May 2006, however, the Court of Appeal said Mr Haw would need police permission to continue the protest. This was granted, but police limited his protest site to an area 3m wide by 1m deep by 3m high. They later tried to seize almost all his placards on the grounds he had breached those limits and left the site open to terrorists but a judge in 2007 ruled he had no case to answer.

In May 2010, Mr Haw was charged with obstructing police during searches of tents on the green. Speaking after a court appearance, he set out his intention to remain in the square for the rest of his life.

"We're there because our country is committing infanticide, genocide, the looting of nations. I'm determined to be there until they kill me. How much longer will that be?"

In March this year, Mayor of London Boris Johnson won a possession order to evict Mr Haw and other campaigners from Parliament Square Gardens, which is owned by the Greater London Authority (GLA).

If the council wins its court bid, the camp could be permanently removed.

Haw under arrest before the State Opening of Parliament in 2010 Photo: JEFF MOORE
Behind the protest

Mr Haw was born in 1949, initially living in Barking, Essex. He was a member of the merchant navy, ran a removals business and worked as a carpenter.

An evangelical Christian, his faith saw him visit Northern Ireland during the Troubles, and the killing fields of Cambodia.

He also worked with troubled youngsters in Redditch, Worcestershire, where he lived with his wife Kay and his seven children before starting his Parliament Square protest.

He said the children of Iraq and other countries were "every bit as valuable and worthy of love as my precious wife and children".

"I want to go back to my own kids and look them in the face again, knowing that I've done all I can to try and save the children of Iraq and other countries who are dying because of my government's unjust, amoral, fear - and money-driven policies," he said. I'm determined to be there until they kill me. How much longer will that be?” Mr Haw kept up his campaign for more than a decade, marking the tenth anniversary of his camp just three weeks ago Determined: Mr Haw pictured in the early days of his one-man campaign

War, rapes, killing have no sense !!!

This man is an model or all of the Peacemakers.

Permalink Reply by David Gould on June 29, 2011 at 12:33am
I was fortunate to have met up with Brian on my frequent trips to London from Scotland. He had a dry sense of humour and often sang the Green Fields or the Ode to Willie McBride...
Did they Beat the drum slowly, did they play the pipes lowly?
Did the rifles fire o'er you as they lowered you down?
Did the bugles sound The Last Post in chorus?
Did the pipes play the Flowers of the Forest?

Brian was totally dedicated to what he believed was right and was possibly one of the greatest peace campaigners of all time...up there on a par with Martin Luther and John Lennon...he lived his protest through ten years of discomfort while daily he faced the idiots in parliament that cause these uncalled for wars...and he told them to their faces that they were liers and thieves of lives. Above all he gave his life to the cause of peace and showed the British people that it takes guts to fight, it takes courage to have the constant beatings from our brutal police (we live in a police fascist state that outlaws peaceful protest)...he stood for all that is best in the human psyche, all that is noble and fine, upholding human rights of other without a voice...he was the giant among the pygmies of Whitehall...and I was honoured to number him among my friends...I shall miss him but the mission goes on till all weapons become museum pieces and peace prevails in every human heart.

Permalink Reply by David Gould on June 29, 2011 at 12:36am
On one of my meetings with Brian...we were looking at a huge roll of comments people had put on a roll of paper to protest at the continued support of Israeli settlements by the British Government.
Attachments:

When I heard about Brian's death and have posted the information here, my thoughts were constantly with you David, because I knew of your close relationship with him.

On this occasion I would like to thank you very much for your lyrics of the song for the children's choir.

It has touched me deeply, like all your poems dear David !.

Waves of Love for everyone who loved Brian. 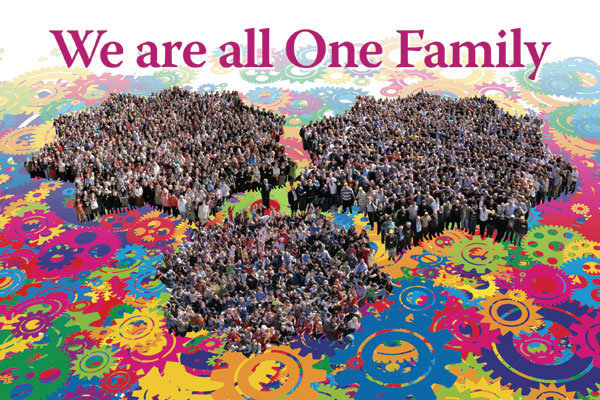 Love and Peace for all Beings and for Brian's spirit

Whether the weather was dry or damp

You would find Brian in his Peace Camp

His presence ever opposite parliament

Within his ever protesting encampment

He told Blair straight out “You Lie

Your policies cause the children to die.

Your shells of depleted uranium rain

Dust that cause birth defects and pain

And yet you smile, you never care

You drive past with frozen stare

And never once did you try and dare

To come and talk or try to explain

I have stood through sun and rain

While all your plans just cause pain.” Permalink Reply by Béatrice LATEUR LACROIX on June 29, 2011 at 12:48pm
Thanks for sharing Brian's determiantion and motivation, David.
You Knex him so deeply ...

Love and Peace for you and all Biengs.