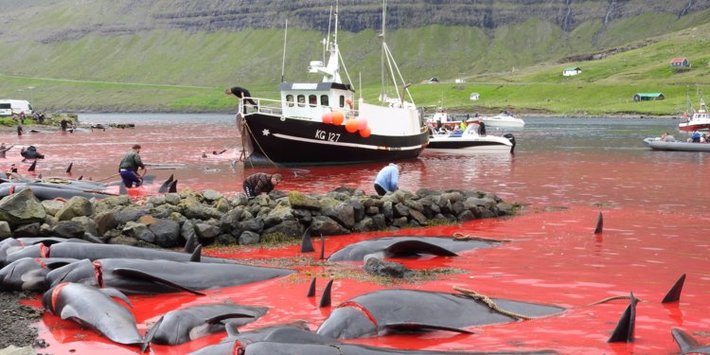 Locals on the Faroe Islands tend to newly-killed whales after a hunt. Sea Shepherd

The Faroe Islands, an unusual cluster of islands in the North Atlantic, is a burgeoning tourists hotspot.

According to Business Insider's Rachel Hosie, the island is now so popular that it closed itself to tourists, except those who are willing to help repair and maintain the island.

However, there is a darker side the the ruggedly beautiful territory. Read this article, first published by Business Insider in 2017, to learn more.

For reading the full article, follow the link below:

We Need to Unleash on the Ferocious Isles.

We need to invade and assault these vicious islands with the most powerfully effective weapon ever devised - the camera.

We need to send these photos and videos around the globe. We need to bombard Denmark and the Faroe Islands with letters, petitions and law suits.

We need to constantly deliver these photos and facts to the international media and to spread the truth across global social networks.

We need to have people boycott Faroese fish, especially farmed domestic salmon and to boycott tourism to these savage shores.

We need to discourage musicians from performing on these blood soiled group of North Atlantic rocks. We need to boycott Faroese groups like Tyr from traveling the globe as Ambassadors for the slaughter of whales and dolphins.

WE NEED TO END THE SADISTIC ABOMINATION CALLED THE GRINDADRAP (THE MURDER OF WHALES).