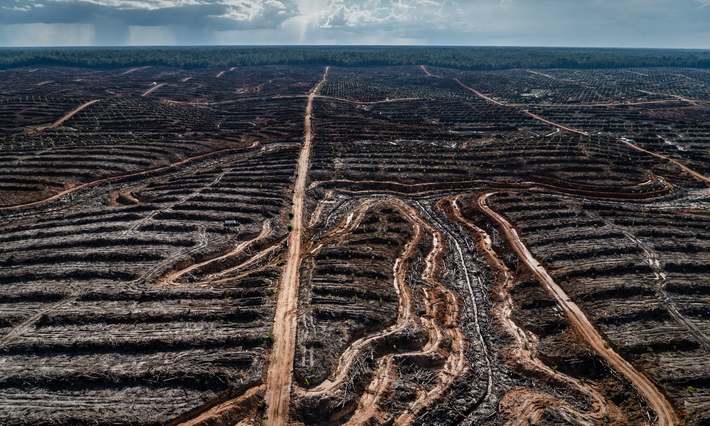 Forest clearance in Indonesia. Scientists have warned of the impact of deforestation on animals. Photograph: Ulet Ifansasti/Greenpeace

Human society is in jeopardy from the accelerating decline of the Earth’s natural life-support systems, the world’s leading scientists have warned, as they announced the results of the most thorough planetary health check ever undertaken.

From coral reefs flickering out beneath the oceans to rainforests desiccating into savannahs, nature is being destroyed at a rate tens to hundreds of times higher than the average over the past 10m years, according to the UN global assessment report.

The biomass of wild mammals has fallen by 82%, natural ecosystems have lost about half their area and a million species are at risk of extinction – all largely as a result of human actions, said the study, compiled over three years by more than 450 scientists and diplomats. 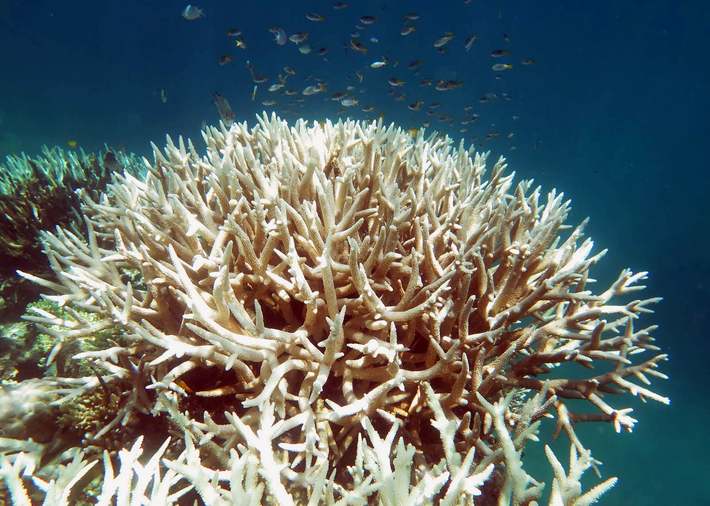 Two in five amphibian species are at risk of extinction, as are one-third of reef-forming corals, and close to one-third of other marine species. The picture for insects – which are crucial to plant pollination – is less clear, but conservative estimates suggest at least one in 10 are threatened with extinction and, in some regions, populations have crashed. In economic terms, the losses are jaw-dropping. Pollinator loss has put up to $577bn (£440bn) of crop output at risk, while land degradation has reduced the productivity of 23% of global land.

The knock-on impacts on humankind, including freshwater shortages and climate instability, are already “ominous” and will worsen without drastic remedial action, the authors said.

“The health of the ecosystems on which we and other species depend is deteriorating more rapidly than ever. We are eroding the very foundations of economies, livelihoods, food security, health and quality of life worldwide,” said Robert Watson, the chair of the Intergovernmental Science-Policy Platform on Biodiversity and Ecosystem Services (Ibpes). “We have lost time. We must act now.”

The warning was unusually stark for a UN report that has to be agreed by consensus across all nations. Hundreds of scientists have compiled 15,000 academic studies and reports from indigenous communities living on the frontline of change. They build on the millennium ecosystem assessment of 2005, but go much further by looking not just at an inventory of species, but the web of interactions between biodiversity, climate and human wellbeing.

Over the past week, representatives from the world’s governments have fine-tuned the summary for policymakers, which includes remedial scenarios, such as “transformative change” across all areas of government, revised trade rules, massive investments in forests and other green infrastructure, and changes in individual behaviour such as lower consumption of meat and material goods.

Following school strikes, Extinction Rebellion protests, the UK parliament’s declaration of a climate emergency and Green New Deal debates in the US and Spain, the authors hope the 1,800-page assessment of biodiversity will push the nature crisis into the global spotlight in the same way climate breakdown has surged up the political agenda since the 1.5C report last year by the UN Intergovernmental Panel on Climate Change. David Obura, one of the main authors on the report and a global authority on corals, said: “We tried to document how far in trouble we are to focus people’s minds, but also to say it is not too late if we put a huge amount into transformational behavioural change. This is fundamental to humanity. We are not just talking about nice species out there; this is our life-support system.”

The report shows a planet in which the human footprint is so large it leaves little space for anything else. Three-quarters of all land has been turned into farm fields, covered by concrete, swallowed up by dam reservoirs or otherwise significantly altered. Two-thirds of the marine environment has also been changed by fish farms, shipping routes, subsea mines and other projects. Three-quarters of rivers and lakes are used for crop or livestock cultivation. As a result, more than 500,000 species have insufficient habitats for long-term survival. Many are on course to disappear within decades.

Eduardo Brondizio, an Ibpes co-chair from Córdoba National University in Argentina, said: “We have been displacing our impact around the planet from frontier to frontier. But we are running out of frontiers … If we see business as usual going forward then we’ll see a very fast decline in the ability of nature to provide what we need and to buffer climate change.”

Agriculture and fishing are the primary causes of the deterioration. Food production has increased dramatically since the 1970s, which has helped feed a growing global population and generated jobs and economic growth. But this has come at a high cost. The meat industry has a particularly heavy impact. Grazing areas for cattle account for about 25% of the world’s ice-free land and more than 18% of global greenhouse gas emissions. Crop production uses 12% of land and creates less than 7% of emissions.

The study paints a picture of a suffocating human-caused sameness spreading across the planet, as a small range of cash crops and high-value livestock are replacing forests and other nature-rich ecosystems. As well as eroding the soil, which causes a loss of fertility, these monocultures are more vulnerable to disease, drought and other impacts of climate breakdown.

In terms of habitats, the deepest loss is of wetlands, which have drained by 83% since 1700, with a knock-on impact on water quality and birdlife. Forests are diminishing, particularly in the tropics. In the first 13 years of this century, the area of intact forest fell by 7%, bigger than France and the UK combined. Although the overall rate of deforestation has slowed, this is partly an accounting trick, as monoculture plantations replace biodiverse jungle and woodland.

Oceans are no longer a sanctuary. Only 3% of marine areas are free from human pressure. Industrial fishing takes place in more than half the world’s oceans, leaving one-third of fish populations overexploited. Climate change, pollution and invasive species have had a relatively low impact, but these factors are accelerating. Emissions continue to rise. Last week, the amount of carbon dioxide in the atmosphere passed the 415 parts per million mark for the first time. Even if global heating can be kept within the Paris agreement target of 1.5C to 2C, the ranges of most species will shrink profoundly, the paper warns.

Population growth is noted as a factor, along with inequality. Individuals in the developed world have four times as much of an economic footprint as those in the poorest countries, and the gap is growing.

Our species now extracts 60bn tons of resources each year, almost double the amount in 1980, though the world population has grown by only 66% in that time. The report notes how the discharges are overwhelming the Earth’s capacity to absorb them. More than 80% of wastewater is pumped into streams, lakes and oceans without treatment, along with 300m-400m tons of heavy metals, toxic slurry and other industrial discharges. Plastic waste has risen tenfold since 1980, affecting 86% of marine turtles, 44% of seabirds and 43% of marine mammals. Fertiliser run-off has created 400 “dead zones”, affecting an area the size of the UK.

Andy Purvis, a professor at the Natural History Museum in London and one of the main authors of the report, said he was encouraged nations had agreed on the need for bitter medicine. 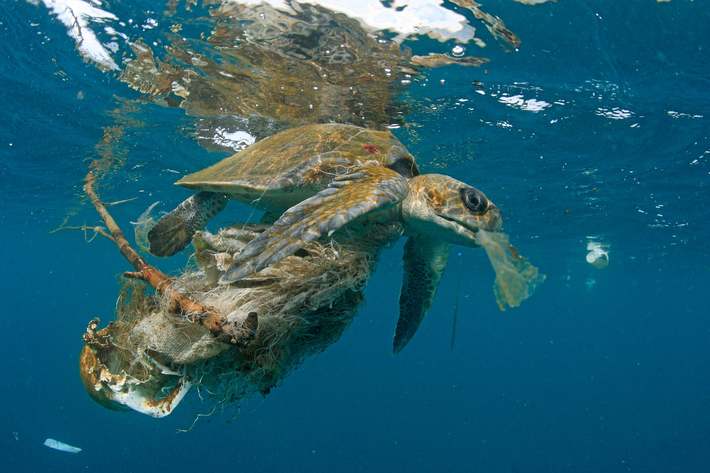 An olive ridley turtle snarled up in plastic waste near Contadora Island in Panama. Photograph: SeaTops/Alamy

“This is the most thorough, most detailed and most extensive planetary health check. The take-home message is that we should have gone to the doctor sooner. We are in a bad way. The society we would like our children and grandchildren to live in is in real jeopardy. I cannot overstate it,” he said. “If we leave it to later generations to clear up the mess, I don’t think they will forgive us.”

The next 18 months will be crucial. For the first time, the issue of biodiversity loss is on the G8 agenda. The UK has commissioned Partha Dasgupta, a professor at Cambridge University, to write a study on the economic case for nature, which is expected to serve a similar function as the Stern review on the economics of climate change. Next year, China will host a landmark UN conference to draw up new global goals for biodiversity.

Cristiana Pașca Palmer, the head of the UN’s chief biodiversity organisation, said she was both concerned and hopeful. “The report today paints quite a worrying picture. The danger is that we put the planet in a position where it is hard to recover,” she said. “But there are a lot of positive things happening. Until now, we haven’t had the political will to act. But public pressure is high. People are worried and want action.”

The report acknowledges current conservation strategies, such as the creation of protected areas, are well-intended but inadequate. Future forecasts indicate negative trends will continue in all scenarios except those that embrace radical change across society, politics, economics and technology. A rhinoceros walks through a wildfire in a field at Pobitora wildlife sanctuary in Assam state, India. Photograph: Biju Boro/AFP/Getty Images

It says values and goals need to change across governments so local, national and international policymakers are aligned to tackle the underlying causes of planetary deterioration. This includes a shift in incentives, investments in green infrastructure, accounting for nature deterioration in international trade, addressing population growth and unequal levels of consumption, greater cooperation across sectors, new environmental laws and stronger enforcement.

Greater support for indigenous communities and other forest dwellers and smallholders is also essential. Many of the last holdouts for nature are in areas managed by such groups, but even here, the pressures are beginning to take a toll, as wildlife declines along with knowledge of how to manage it.

Josef Settele, an Ipbes co-chair and entomologist at the Helmholtz Centre for Environmental Research in Germany, said: “The situation is tricky and difficult but I would never give up. The report shows there is a way out. I believe we can still bend the curve.

“People shouldn’t panic, but they should begin drastic change. Business as usual with small adjustments won’t be enough.”

Take your time and see the original:here: it is for our future !