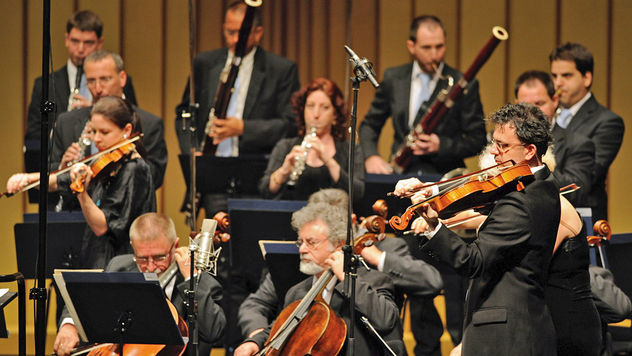 With the Israeli national anthem, led the "Israel Chamber Orchestra" in Bayreuth his historic concert. A day after the opening of the 100th Richard Wagner Festival in Bayreuth.

Israeli orchestras have held back from performing Wagner's music in the past because of its use in Nazi propaganda during World War II . The 19th century composer was known for his anti Semitic views and performances of his music in Israel are considered insensitive to survivors of the Holocaust and many other Israelis.

Conductor of the orchestra Roberto Paternostro said on Israeli TV it was time to separate Wagner's world view from his music. "He was a great composer and the aim in the year 2011 is to divide the man from his art," he said.

This was the first time an Israeli orchestra played Wagner in Germany.

Uri Hanok head of the Holocaust Survivors Union to Prevent the Playing of Wagner, told CNN, "When I heard that an Israeli orchestra was to play Wagner in Germany I could not sleep. Wagner despised Jews, it was evident in all his writings. While there are still survivors alive, his music should not be played in Israel and certainly not by an Israeli orchestra."

Paternostro said at a news conference, "There wasn't a moment when I had any doubts about this project it was my greatest conviction to bring these two sides Israel and Wagner together." Paternostros mother and other relatives were Holocaust survivors. "I know that in Israel this is not accepted, but many people have told me its time we confront Wagner especially those in the younger generation" the conductor said.

Israel's state owned TV and radio still keep Wagner off the air. In 2001 the world renowned conductor Daniel Barenboim angered many Israelis when he played Wagner's music in Israel.

Permalink Reply by Ned Hamson on July 27, 2011 at 8:05pm
I saw this in Israeli press. Does it change things for the better? I don't know that it does. Germans and Israelis have to work this out. I'd be more supportive, I suppose that more and more collaborations between Israeli and Palestinian musicians would do more good and would be of more interest to me.

Permalink Reply by Eva Libre on July 27, 2011 at 8:53pm
I agree with you Ned. I mean, the dialogue between Israelis and Palestinians has priority. But for me as German, these events are very interesting. Let's not forget the past, important also for the following generations.

Permalink Reply by Stephen Quinto on July 27, 2011 at 9:22pm
One dream - soon to be realized - is to play this music - esp from the Ring cycle - for the trees in our forest. Now that will give them something to talk about!  In truth, some of this music is ....sublime. We know too well the breadth of 'noblesse' [as well as living tragedy] in this music.  Creation never blessed one against another ....the pity is that man did.....

I agree with your 3 posts, my friends.

We all have to make news steps in understanding, forgivness, comprehsion and compassion.

I hope all of us prepare real Peace on Earth

Permalink Reply by Irit Hakim-Keller on July 29, 2011 at 1:59pm
Reading all the comments here, I agree them all. Music is an instrument of healing, and any opportunity to heal a wound of any kind, is recommended.
I cannot ignore the feelings of the ones who objected the Israeli orchestra playing Wagner, though. It is not only because Wagner had been Hitler's favourite but because Wagner had been Anti Semitic, well known as Jews hater. It gives the chills even thinking of it.
But, time has come to make a change in the approach, to ...'forgive' is not the right word in this issue..the deeds where to horrible ...but to say: let's leave all this behind and make a new beginning ; let's heal the wound instead keeping it open and bleeding ; let's face forward instead stay in the past.

Thanks you for proposing to change "forgive" by let's leave all this behind and make a new beginning ; let's heal the wound instead keeping it open and bleeding ; let's face forward instead stay in the past.

With respect and gratitude for you, Irit.

Perhaps it would be more appropriate to take this opportunity ....by going deeper into the process of 'purification' ....and hence healing. There is no doubt we are one. ....are all brothers and sisters ....even with the animals and the plants our spirits are entwined.

If we are truly a family ...the family of Man ....then we must delve deeper into the evils we have committed ....because we must get to the source, beyond the root, and exorcise it. And how do we do that?  By taking this terrible trip and penetrating its mystery [and mastery, by extension] for that is where the source of it is....

Then, once having arranged this profane to the extent that it 'fits' ....after all this truly is a 'one size fits all' procedure, then one can easily see in the reflection that this was our own profane issue too ....one can now really forgive oneself ....for it is once and for all finished.

May we take this loving kindness now and place it before the Great Spirit ....for we are better prepared to serve the divine purpose for which we are here. Ah, my children, that is ....Peace.

Permalink Reply by Irit Hakim-Keller on July 29, 2011 at 8:25pm
Stephen,
Your approach of course is a spiritual one, but alas, not everyone would have it.

Jews who survived the Holocaust, divided into two main groups - those who are ready to move on with life, ready to return to Germany, even to live there.They are the ones who would take the spiritual way.. But, there are the others, of the second group -who wouldn't touch anything German, are not ready even to hear the language, and their lives continue to be protracted agony. I do not think they would take a suggestion of "evil WE have committed" , nor they would accept the Nazis as their family...or humane...
To be honest - I must say I cannot judge them. They have been through hell - I do not think I have the right to offer them the spiritually way of thinking about their experience.

Thank you for sharing your conception of life.

it is not for us to judge ....but, faced with whatever.... to choose a consequential path.  Thus do we evolve ....on a sacred path and into the future only we create. 'The train doesn't stop here anymore' ....is an apt descriptor of ...the path.

Let us hope and  do for better life.

May you have a happy weekend.

Thanks for your words of unity.