Letter of 22 US Environment Leaders to Obama 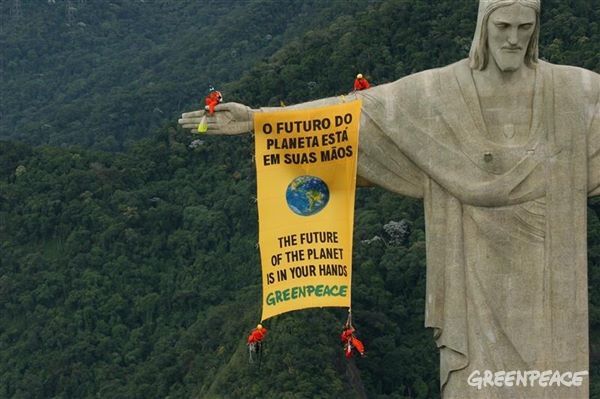 We are writing on behalf of civil society organizations that represent more than 5 million Americans to urge you to commit as soon as possible to lead the United States delegation to the Rio+20 Earth Summit in Brazil in June.

Your presence at this Summit would signal its critical importance to all Americans, demonstrate our country’s deep concern over urgent global issues that will inevitably affect our security and well-being, and highlight our nation’s determination to be a contender in the race to a low-carbon green economy. As United Nations Secretary General Ban Ki-Moon stated recently, your participation will be “crucial.” This is true both for the success of the summit and progress toward a sustainable future for everyone on this fragile planet, and for your Administration’s goals on jobs and clean energy here at home.

We appreciate the leadership shown by the United States in the Rio+20 preparatory process in advocating that the United Nations encourage countries, corporations, and communities to make commitments in Rio to specific measurable actions. Your presence at the Earth Summit would cement this leadership.

Our organizations additionally urge your Administration to announce as soon as possible its own commitments for Rio+20 as a model for other nations and stakeholders. Such commitments might involve new initiatives or those already underway where the action will be expanded going forward. Your Administration can point to important areas where it is making real progress towards sustainability - including making major new investments in renewable energy, promulgating EPA rules on carbon pollution from power plants, and proposing to reduce fossil fuel subsidies, among others.

US commitment to leadership at home can help leverage global action in Rio at the Earth Summit. World leaders are poised to make progress on eliminating fossil fuel subsidies at the Summit, building on the commitment your Administration made at a Group of 20 Summit in 2009 to phase out fossil fuel subsidies. We fully support your statement during the 2012 State of the Union speech: “We’ve subsidized oil companies for a century. That’s long enough.” And we believe the American people fully support your administration to take the next steps at Rio+20.

Internationally, the Administration can point to a number of new partnerships it has launched, including ones on short-lived climate forcers, clean water, and clean cook stoves. We hope that the US will make commitments to the UN Secretary General’s Sustainable Energy for All Initiative, including securing a commitment from the World Bank Group to mobilize up to $500 million to support off-grid clean energy investments. In addition, we understand that the Administration will use Rio as a platform to launch an international monitoring network on ocean acidification, a plan that we fully support.

The United States should advocate for strong language in the Earth Summit outcome document that will catalyze action to build healthy, resilient ocean ecosystems by reducing pollution and overfishing, establishing meaningful prohibitions on harmful fisheries subsidies that contribute to overcapacity of global fishing fleets, establishing protected areas to sustain ecosystems in the face of rising ocean acidification and other stressors, and enhancing coordinated global monitoring of ocean acidification. These steps are fundamental for livelihoods, food security and sustainable development in island and coastal states, as well as for coastal and fishing communities here at home.

The Administration can also demonstrate leadership in creating a vision of a sustainable future, by strengthening international norms, and creating new structures to advance sustainability. We look to the United States, long a champion of human rights, to affirm that respect for human rights and the environment is an integral element of sustainable development and to support inclusion of the right to a healthy environment in the Rio+20 Outcome Document. The proposal to establish a High Commissioner for Future Generations would provide a new voice to assure that international deliberations take into account the interests of those who will inherit this world from us. After four decades, it is also clear that we need to strengthen the United Nations Environment Programme.

Finally, we urge your Administration to be a strong advocate for speeding the transition to a Green Economy and to help catalyze the scaling up of clean energy technologies and infrastructure that will create millions of new green jobs around the world and at home. This has been a cornerstone of your Administration. As you said in the 2012 State of the Union, “It is time to… double-down on a clean energy industry that never has been more promising…. Because of federal investments, renewable energy use has nearly doubled, and thousands of Americans have jobs because of it.” With your leadership, the Earth Summit can galvanize a strong global commitment to a green economy and stimulate new investment and jobs.

We believe that your leadership at Rio+20 affirming this country’s commitment to a green and sustainable future will provide – particularly for the youth – a vision of a future that works for them and for all of us. As you told Ghana’s parliament in July 2009, “above all, it will be the young people – brimming with talent and energy and hope—who can claim the future….” We are eager to work with you and your Administration to demonstrate American commitment and leadership to sustainable development, the environment, poverty alleviation and green jobs – and to make the 2012 Earth Summit a success.

Signed CEOs of the following:

Let's remember we all are responsible of Mother Earth.

love and peace to you