The American spiritual leader, yogi, counterculture icon, and Be Here Now author has died. He was 88. 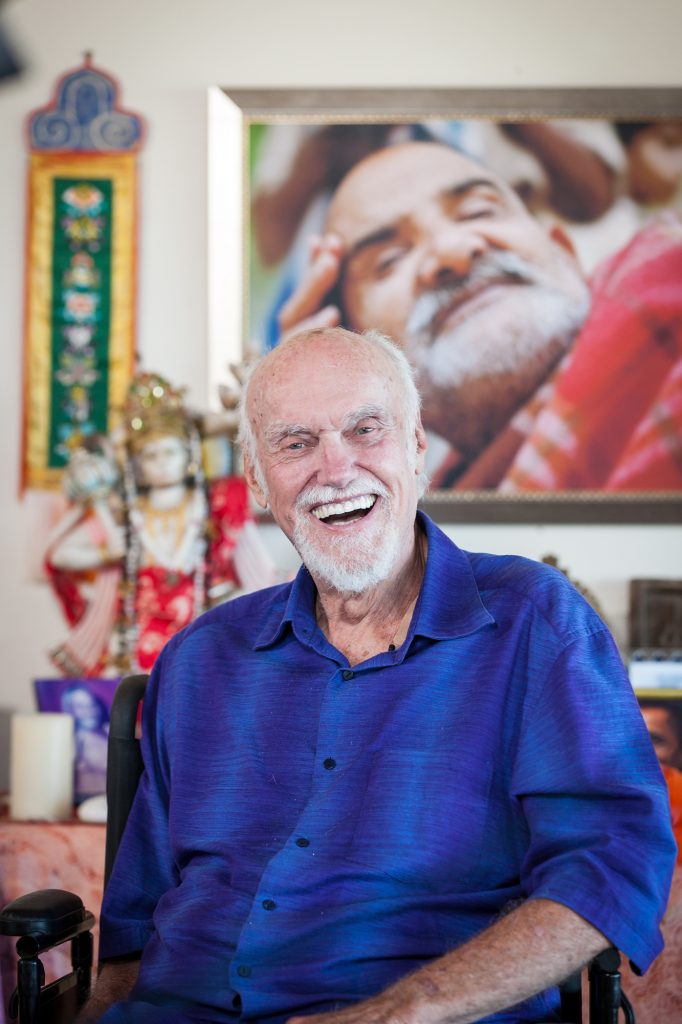 Ram Dass, 87, sits before an altar at his home in Hawaii. | Photograph by Jonathan Perugia / Gaia Visual

If there is an enduring figure emblematic of the consciousness revolution of the 1960s and 70s, it is arguably the Harvard professor and LSD researcher-turned-spiritual leader born Richard Alpert but known the world over as Ram Dass. With Timothy Leary, his colleague in the Harvard psychology department, he forever changed a generation of Americans through his explorations with psilocybin, LSD-75, and other psychedelics before reinventing himself as a spiritual teacher and humanitarian—a bhakti yogi with love as his path. When Ram Dass died on Sunday evening, one of the most beloved voices of the counterculture fell silent. He was 88 years old.

It was Leary who famously exhorted American youth to “Turn on, tune in, drop out,” but it was Alpert who became a model of awakening that wasn’t dependent on drugs. Fired from Harvard in 1963 for giving LSD to an undergraduate, Alpert moved to Millbrook, New York, with Leary, who had been fired ostensibly for not showing up for his classes. In Millbrook, the two continued their psychedelic experimentation with an ever-changing cast of psychonauts and acidheads. But in 1967, Alpert, still searching, left for India. There he found his guru, the Hindu sadhu Neem Karoli Baba, known as Maharaj-ji, characteristically wrapped in a blanket and seated on a wooden tucket, a low Indian bed. Curious to see how a spiritual adept would react to LSD, Alpert gave Maharaj-ji a whopping dose. It had zero effect on the holy man. Over the next few years until Maharaj-ji’s death in 1973, Alpert—by then renamed Ram Dass, or Servant of God, by Maharaj-ji—periodically returned to be with his guru. Resettling in America in 1974, he started a new life based on a different kind of turn-on—meditation—and his own synthesis of Buddhist, Hindu, Advaita, and Sufi teachings, and later, Jewish mysticism.

In Be Here Now, Ram Dass's first book for the masses, which has sold over 2 million copies since publication in 1971, he offered seekers an engaging, unconventional, slightly zany roadmap for finding a spiritual path and a more enduring connection to higher consciousness than a tab of acid could bring. From then on, in close to a dozen books and countless teachings, retreats, and podcasts, Ram Dass continued to share the wisdom of a journey that had long gone beyond personal transformation to embrace a cosmic worldview and social Agenda.

Much of the compassionate service for which Ram Dass became known was in collaboration with others. He launched the Hanuman Foundation to further practical application of the principles and teachings of Neem Karoli Baba—work that continues today through Ram Dass’s Love Serve Remember Foundation. Through Hanuman he also set up the Prison Ashram Project, offering counseling and spiritual practice to the incarcerated, many of whom had contacted Ram Dass after reading Be Here Now.

Inspired by the humane approach to death and dying he had seen in India, Ram Dass was instrumental in co-creating the Living-Dying Project to support caregivers, healthcare professionals, and individuals dealing with terminal illness, and in establishing a hospice and training center in Santa Fe, New Mexico. In 1979, with epidemiologist and Hanuman board member Larry Brilliant and others, Ram Dass founded the Seva Foundation, which works to combat blindness in the Himalayas and provides healthcare there and in other underserved areas of Asia and the Americas. He also helped set up the Social Venture Network to explore ways to bring spiritual awareness to business and served on the board of Creating Our Future, an organization for teens who wanted to lead more spiritual lives. On Maui, where he has lived since 2004, Ram Dass co-founded Doorway Into Light, which helps people prepare for dying. “Sitting by the bed of the dying is sadhana [spiritual practice],” he said. For his unwavering commitment to helping others, Ram Dass has been called “a model of selfless service.”

“My life has been a dance between power and love,” he observed after the massive cerebral hemorrhage in 1997 that left the charismatic, preternaturally articulate teacher groping for words. “First part, till Harvard: power, power, power, power. Up until drugs, I thought power was the end all and be all, because I was a little individual. Then drugs: love, love, love, love. My first mushroom trip was so profound that I saw radiance was inside, and I said, ‘I’m home, I’m home, I’m home.'”

Born Richard Alpert on April 6, 1930 in Boston, Ram Dass was the youngest of three brothers. His father, George Alpert, a prominent lawyer, was president of the New York, New Haven & Hartford Railroad and the first board president of Brandeis University. The family was Jewish and Richard was bar mitzvahed, but he later called the ritual “hollow” and claimed to have had no interest in religion until he took psychedelics. After graduating cum laude from Williston Northampton, a prep school in Massachusetts, he earned a bachelor’s degree from Tufts, a master’s from Wesleyan, and a PhD from Stanford–all in psychology. In California he met psychologist David McClelland, who became his mentor and brought Alpert with him to Harvard. At Harvard, Alpert was a star, with appointments in the Psychology and Social Relations Departments, the Graduate School of Education, and the Health Service, where he served as a therapist. He also had research grants from Yale and Stanford, and was publishing academic books. “In 1961, at the beginning of March, I was at the high point of my academic career,” he wrote in Be Here Now. “I was making a great income, and I was a collector of possessions,” among them an antiques-filled Cambridge apartment, a Mercedes-Benz, an MG sports car, a Triumph 500cc motorcycle, and a Cessna 172 airplane. “But what it all boils down to is that I was really a very good game player.”

All that changed on March 6, 1961, the day he took psilocybin for the first time. Psychedelics led to his second great awakening: his encounter with Maharaj-ji and spiritual transformation. Then in 1997, as Ram Dass was finishing Still Here, the second volume of his spiritual memoirs, he had his third great awakening, the stroke that began the final phase of his life. He was given only a 10 percent chance to survive.

Long an outspoken advocate and support for the sick and dying, shortly before his stroke, Ram Dass told an audience: “Something has happened to me as a result of my meanderings through consciousness over the past 30 years that has changed my attitude towards death. A lot of the fear that denial of death generated has gone from me. Death does not have to be treated as an enemy for you to delight in life. Keeping death in your consciousness as one of the greatest mysteries and as the moment of incredible transformation imbues this moment with added richness and energy that otherwise is used up in denial.”

After the stroke, those observations seemed hopelessly naive, he said. The stroke had given him a far deeper understanding of what the suffering of aging, infirmity, and dying really means. Characteristically, he viewed it in spiritual terms: “I don’t wish you the stroke, but I wish you the grace from the stroke,” he said in Ram Dass, Going Home, a 2017 documentary by Derek Peck. “The stroke pushed me inside even more. That’s so wonderful.”

It also meant that the man who had spent much of his life helping others had to let others help him. Noting that before the stroke, he had co-authored a book about service called How Can I Help?, “after the stroke I would have titled it How Can You Help Me?” he said. “In this culture dependency is a no-no. The stroke showed me dependency, and I have people who are dependable.”

Following a near-fatal infection in 2004, Ram Das was largely confined to his home on Maui. A sprawling, light-filled aerie with lush vegetation and a panoramic ocean view, it was a gift from devoted friends. One of his pleasures was his weekly swim in the ocean, accompanied by a clutch of neighbors. After being wheeled to the shore in a dune buggy with enormous yellow balloon wheels and orange floats as armrests, he would launch himself into the sea. There, buoyed by a large black life jacket, he would paddle gently with yellow webbed mitts, a look of delight on his face.

Rum Dum to his father, RD to his friends, Ram Dass was a true original. He lived out loud, with a rollicking laugh and seemingly irrepressible esprit de corps. Even when his stroke rendered him virtually immobile with halting speech, he could summon his far-ranging mind to be totally present for his weekly podcasts and the friends and followers who gathered around him, some coming to Maui for his thrice-yearly retreats. His door was open to a steady stream of visitors, many of them strangers, seeking comfort, inspiration, or advice.

Ram Dass’s spunk and determination were the energetic benefits of years of spiritual practice and a bodhisattva-like commitment to sharing it with others. Mirabai Bush, a “guru sister” from their days with Maharaj-ji in India and his collaborator on his last book, Walking Each Other Home: Conversations on Loving and Dying, summed up his life’s work in her introduction. “Ram Dass’s journey has been a search for love and for finding a way to stay in the space of love once he experienced it,” she wrote, adding, “Ram Dass was always loving, but now he is love.”

Unsinkable, Ram Dass survived great challenges to remain one of the most colorful and memorable spiritual leaders of his age. When he finally surrendered to death, it was with what filmmaker Mickey Lemle, in his 2001 documentary about RD, called “fierce grace.”

RIP Ram Dass, one of our best teachers of how to get through all this.....

Ram Dass and others comment on the Love Serve Remember Foundation and its teachings in this video.

a great soul has passed.. those of us still here must spread his words.