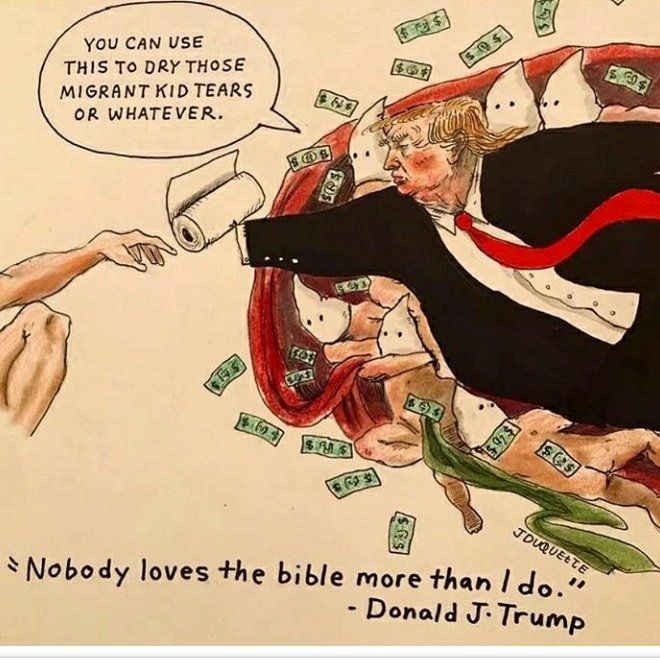 Donald Trump understands something about America that many progressives simply do not. He knows that his perspective is historically and culturally really very true red, white and blue American.

Donald Trump is a shameless opportunist and he saw an opportunity to harness a segment of America that has always been racist, xenophobic, misogynistic, homophobic, bigoted, violent, genocidal and willfully ignorant.

As a student of American history, I am not surprised at all.

This nation was forged violently on the altar of racism. It was founded by privileged slave holders whose definition of a voting citizen had to be white, protestant and land owning. The United States along with Canada and Mexico was built on the foundation of the most genocidal savagery that the world has ever witnessed – the horrific extermination and merciless subjugation of the indigenous population of the continent.

The history of the United States is a story of mass hypocrisy and unfettered avarice where unrestricted greed was the primary motivation of the majority of the population as they seized land by overwhelming force, fraud, and savage deception.

It is a history written by the invaders where when indigenous people were massacred it was called a battle and when a rare victory by indigenous people happened it was quickly labeled a massacre. As an example the vicious massacres of Wounded Knee and Sand Creek are defined as battles in American history books whereas the victory over Custer and his attacking soldiers is viewed as a massacre.

It is a history where the trappings of pseudo-Christianity perversely cover up actions and policies that are blatantly antithetical to the entire philosophy of Christianity, a religion founded on the life of a brown skinned, socialist, Semitic, advocate for the poor, for peace and for equality.

This is a country that held so little regard for women that they were only allowed to vote 144 years after the signing of the Constitution and they had to fight to secure that right in the form of an Amendment. New Zealand, Australia, the Netherlands and Great Britain all had franchised women before the land of “liberty” elected to do so.

And yet the constant litany of “freedom” is boastfully emblazoned across this nation like it is the only country in the world that is free. At least 150 countries in the world can be defined as free, some even more so than the USA. The difference with the United States is that the word “freedom” seems to be a word that has lost its value and is today a relatively meaningless and empty slogan. As the great Sixties songwriter Phil Ochs once wrote, “The mad director knows that freedom will not make you free.”

In his song Cops of the World Ochs also wrote: “We own half the world, oh say can you see the name for our profits is democracy So, like it or not, you will have to be free. Cause we're the Cops of the World, boys.

With his recent 4th of July speech Donald Trump confused the American Revolution with the War of 1812. But there is one small detail about the War of 1812 that is always ignored and that is that the British who had already outlawed slavery were fighting against slavery and the third verse of the Star Spangled Banner is a testament to the revulsion the “free” Americans had for the anti-slavery movement. Most American only know and sing the 1st verse but here is the 3rd verse:

And where is that band who so vauntingly swore,
That the havoc of war and the battle's confusion
A home and a Country should leave us no more?
Their blood has wash'd out their foul footstep's pollution.
No refuge could save the hireling and slave
From the terror of flight or the gloom of the grave,
And the star-spangled banner in triumph doth wave
O'er the land of the free and the home of the brave.

“No refuge could save the hireling and slave from the terror of flight and the gloom of the grave.”

It was the British fighting for freedom in this war, not the Americans and the American attitude towards the British was disgust and fear that the “radical and extreme” British emancipation would be forced onto America,

And the country moved on through sanctioned lynching, the 1857 Supreme Court Dred Scott case, the illegal annexation of Hawaii, Jim Crow, the internment of Japanese Americans, the Civil Rights Movement, the Vietnam War and the assassination of Black leaders, Indigenous leaders and progressive White leaders as the nation evolved to export terrorism on an unprecedented global scale with the exported assassination of democratically elected foreign leaders and the subverting of nations in order to seize assets like the Panama Canal, plantations, minerals and oil.

The United States was built on the rubble of war and the bodies of millions, from the massacres of indigenous people through to the regime change wars today and many of these wars began with blatant propaganda about being attacked first, from the lies concerning explosion of the battleship Maine in the harbor of Havana to the Gulf of Tonkin to the bullshit now happening in the Persian Gulf.

There was a time less than a century ago that hundreds of politicians including Presidents could not be elected without an open endorsement of the Klu Klux Klan. The KKK were finally driven underground for decades but it now looks like they are rising from the grave like famished Zombies hungry for American brains.

Having said all this, I recognize that there is another America, a gentler more compassionate America and this other America is reflected in the persons of Senator Bernie Sanders, Rep.Tulsi Gabbard, Rep. Alexandria Ocasio-Cortez, Rep. Ilhan Omar, Rep. Ayanna Pressley and Rep. Rashida Tlaib, the latter four all of whom are American citizens that Trump told to go back to the countries they came from, countries like New York, Michigan, Massachusetts and Minnesota.

Within the next two decades, this planet will be faced with the growing and evolving spectre of climate change. Only the progressives are willing to meet this challenge and only they can give us a glimmer of hope for the future.

Nancy Pelosi may think that climate change is not an existential threat but she is wrong. Dismissing the Green New Deal as “whatever” is no different than Donald Trump viewing it as not a threat at all. Her cowardly refusal to impeach Trump demonstrates loud and clear that she is comfortable with the status quo. After all, her net worth is around $120 million and for her, life is good. The real consequences of climate change will smack humanity down long after she is dead. In short – not her problem.

She represents exactly what America is all about, meaning that as long as her life and the economy is good, children in cages, poverty and the destruction of the planet is irrelevant and not worthy for any action beyond lip service.

Thirty years from now, Trump, Pelosi, Graham, Pence, McConnell, Biden and assorted fellow travelers will all be quite dead when the climate change shit really hits the fan. The “whatever” is not their problem, their concern, nor their priority.

The proof of this willful lack of concern comes from the government itself. The U.S. State Department recently released a comprehensive report warning that “burning fossil fuels is warming the planet and could pose serious risks unless the world makes deep cuts in greenhouse gas emissions over the next decade. Senior military and intelligence officials have continued to warn that climate change could undermine the national security of the United States — a position the President rejects.”

In response to the report, White House officials barred a State Department intelligence agency from submitting written testimony this week to the House Intelligence Committee warning that human-caused climate change is “possibly catastrophic.”

And sadly, enough Americans support this position and this enables the Administration and the Congress to justify doing absolutely nothing to address reality.

Our Ocean and our planet is under extreme threat and the solutions to addressing this threat must also be radical and extreme. The usual political and economic status quo that led the nation through its dark shameful history of genocide and destructive resource extraction must not only be challenged, it must be overthrown and this cannot be accomplished within the context of traditional Democratic and Republican strategies.

There needs to be a third Party, a more progressive Party to give thoughtful and compassionate Americans a real alternative. This Party must make climate change a priority along with offering universal health care, universal educational opportunities, and providing all people, citizen and non-citizen alike with respect and a decent quality of life. The U.S. government needs to provide the same benefits to its own people that the U.S. government provides to the people of Israel where socialism is not only entrenched but subsidized by U.S. taxpayers.

Unless the Democrats offer real solutions and solid and intelligent leadership, Donald Trump will win again. Enough Americans support everything he stands for. They always have and they always will. In 2016, many progressives did not vote because they had no one to vote for. And Democrats will now say that is why Trump got elected because of people who did not vote or who voted for the Green Party. I voted for the Green Party for the simple reason I could not stomach voting for Clinton. I don’t vote for war, for Wall Street and for more of the same.

In 2020, I will not vote for “any” Democrat for President. Unless a real progressive is nominated that will take climate change seriously – what’s the point?

What I will do is contribute to the Democratic opponents of Senators Mitch McConnell, Susan Collins and Lindsey Graham. That’s where we can be effective by cutting that kind of rot out of the Senate.

If Trump wins and there is a good chance that he will, the country, indeed the world will need to see him neutered and that can only be done with a Democratic House of Representatives and a Democratic Senate, a Democratic House hopefully without Nancy Pelosi and a Senate without the likes of Graham, McConnell and Collins. Beto O’Rourke needs to drop out and return to campaigning against Ted Cruz and the Democratic Party needs to get real and to stop stifling and sabotaging Bernie Sanders and Tulsi Gabbard.

interesting to read of American history 'built on the rubble of war.' but I must say that the solutions are not with the political process, which is the old way of going on, but with us individually realizing i.e. making real, our awareness of our own inner selves. Knowing the life energy within ourselves will change our own world.. so the answer is not another political party or someone else better to vote for but getting more and more in touch with 'our true selves.'

There are no birthdays today