The Bhagavad Gita is a small part of an epic poem called The Mahabharata which is a story of ancient India.  There was a certain kingdom ruled by a king and queen who bore two sons.  King and queen were happy because they felt assured that the line would be continued.  However, misfortune befell them when their two sons died.  The old king passed away, and the aging queen remembered that before she had been married to the king, she had birthed a son by someone else, a son who had renounced the world and retired to the forest.  She summoned the Rishi and proposed that he impregnate the widows of her two dead sons so that the line could be continued.  The Rishi agreed to her proposal.  He spent the first night with widow number one who was so disgusted by his appearance (straight from the jungle, unkempt, matted locks, the whole nine yards) that she kept her eyes squeezed tight shut the whole time, and when a son was born in due course, he was born blind.  On the second night, the Rishi turned his attention to widow number two who, though able to keep her eyes open, was so terrified that she was white with fright; and when her son was born, he had pale skin.  When the two half-brothers came of age, they carried on the rule of the kingdom.  The blind one, Dhritarashtra, was born first so he was the nominal king, while Pandu, the pale one, being able to see, did most of the actual ruling.  He also went around conquering neighboring territories, so Pandu was really the strength of the kingdom.

Pandu dies, leaving five sons.  The blind king has many sons of his own so the five sons are cousins of the many sons of the blind king.  The eldest of the five is older than the eldest of the king's own sons.  Not only is he older, but he's a lot wiser, nobler, and more qualified to be the heir.  Even though the blind king is extremely attached to his own eldest son, he realizes that the eldest of the five brothers, his nephew, really should be the next king, so he names him king-to-be.  Well, this drives the eldest son (Duryodhana) of the blind king absolutely bananas, because he's incredibly jealous of his cousins, and this is what is behind the whole story, the jealousy and envy towards his cousins, the five brothers.  Duryodhana is a spoiled brat, while his cousins are virtuous, highly evolved beings.  When the eldest of the five is named king-to-be, Duryodhana plots to have them killed.  He builds this beautiful palace and tells them, "I've built this beautiful palace for you," and it's made out of flammable materials with pots of oil in different corners just waiting to be lit after they move in.  But the five brothers see through the ruse and escape.

The kingdom is divvied up.  The five brothers, under Duryodhana's direction, are allotted the most barren, un-tillable, useless parts of the kingdom which they immediately turn into wonderful gardens of fertility, etc.  This only gives Duryodhana more fuel to be spiteful.  He concocts a plan to arrange a game of dice with his eldest cousin (Yudhishthira).  Duryodhana approaches his uncle Sakuni who's really handy with the dice.  He cheats.  Yudhishthira is asked by Sakuni to join him in a friendly little game.  Yudhishthira thinks, "we have to obey our elders," so he feels that he has to do it, even though it's against his better judgment.  Also, as a Kshatriya (a warrior/ruler class person), he feels that he has to accept the challenge.  In addition, he has a "gambling problem," the only chink in his Dharmic armor.  So Yudhishthira plays the game of dice and loses.  He loses all of his possessions; he bets his brothers; he bets his wife; he bets himself; he loses everything.

The five brothers get banished to the forest for twelve years.  The thirteenth year they are to come back and live somewhere in the kingdom in disguise for a whole year; if they get through that year without being discovered, they can come back and their lands and possessions will be restored.  But if they get caught during that year of disguise… twelve more years in the jungle.  They get through the twelve years and the extra year; they come back, and they say, "Okay, we're back, we fulfilled all your conditions; now what are you going to do for us?"  And Duryodhana says, "Nothing.  You can't have anything."  And they say, "Well, just give us five villages, one for each of us.  That's all we want."  And Duryodhana says that he wouldn't give them enough land into which you could drive a pin.  He is so arrogant and full of himself that he doesn't realize that he's sowing the seeds of an armed conflict over the injustice.  The Pandavas (sons of Pandu) have swallowed a lot; they've been happy with barren land; they've gone to the jungle for twelve years; they've done their year of disguise; they'd be happy with just five villages; but it comes to the point where enough is enough already.

Krishna tries to mediate the dispute.  He tries to make Duryodhana see that if he doesn't give the cousins something, there's going to be big trouble.  He carefully alerts Duryodhana to the eventuality that unless he wakes up and acts honorably, he will be watering the seeds of his own demise.  Krishna speaks most eloquently, but even God himself can't make Duryodhana see that his arrogance and spite will be the cause of a full-scale war and indeed will cost him his life as well as the lives of so many heroes.  The Gita is just one incident in this huge epic, the longest piece of literature in the history of the world.  What's happening at the beginning of the Gita is that the war is about to start and both sides are poised to commence hostilities.

Arjuna is the middle brother of the five.  He is a great archer, and Krishna is his charioteer.  Krishna is not going to fight in the war; he is only going to drive Arjuna's chariot, so just as the battle is about to be joined, Arjuna asks Krishna to drive the chariot a little bit farther out into the middle of the battlefield, so that he can look the enemy in the eye… 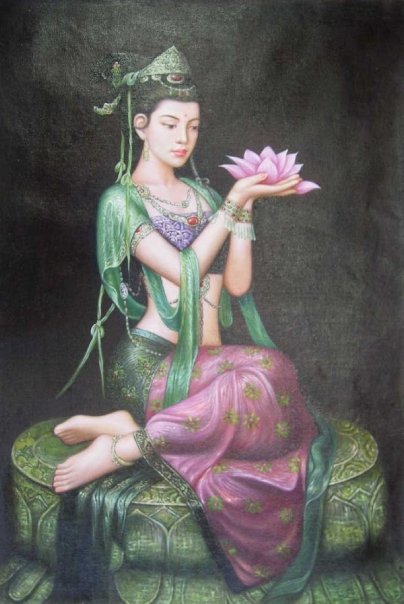 Thank you for this wonderful contribution Krishna Jaya.