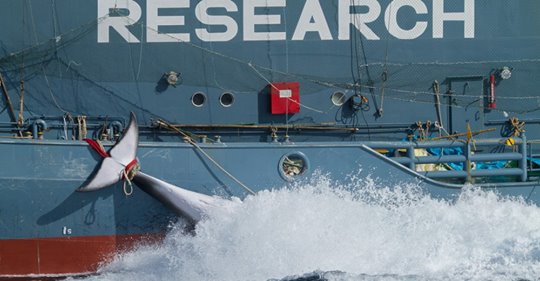 Why Japan leaving the International Whaling Commission is a Good Thing.

I’m not quite sure why so many whale conservationists are upset by today’s announcement by Japan that they will be leaving the I.W.C.

After 16 years of intervening against Japan in the Southern Ocean Whale Sanctuary I see this as a very positive development.

It means that the whale war in the Southern Ocean is over and we and the whales have won.

What we have fought for has been achieved – an end to whaling in the Southern Ocean.

Japan leaving the IWC will allow the IWC to vote and pass the establishment of the South Atlantic Whale Sanctuary.

This means that the entire Southern Hemisphere will be free of whalers for the first time in history.

This is a remarkable and wonderful achievement.

This decision means that Japan will no longer be able to hide their illegal commercial whaling behind the mask of ‘scientific whaling.’

They have never stopped commercial whaling. Japan now joins Norway, Iceland and Denmark as the last whaling nations on the planet and commercial whaling remains illegal. Without the guise of ‘research’ it will be easier to oppose the Japanese. Japan has been killing whales in their own waters for decades. Nothing has changed. They are not resuming the hunting of whales because they never actually stopped hunting whales in the Northwest Pacific.

In other words, the Japanese like the Norwegians, Danes and Icelanders have been driven back to their own shores. The whalers of the world are in retreat.

Without pelagic whaling Japan will not build a new expensive factory ship. There has been great political pressure in Japan to not build this ship and with this decision they will not have to pursue this financial money trap.

Why is Japan Doing This?

1. Increasingly aggressive International Diplomatic pressure.
2. Rising security costs to avoid intervention by Sea Shepherd
3. Rising operational costs with the need to retire the Nisshin Maru and replace it with a new factory ship.
4. Diminished markets for whale meat in Japan.
5. Realization that the IWC will never authorize the return of commercial whaling in the Southern Ocean.

Japan has decided to do what Iceland and Norway have done since 1987 and that is to restrict the killing of whales to their own national waters. Commercial whaling continues but without the pretense of whaling for research our task in continuing to oppose whaling worldwide becomes easier because there will now be no pretense of legality. All commercial whaling by anyone, anywhere has been illegal since 1987.

Sea Shepherd will continue to oppose illegal whaling with a diversity of strategies and tactics.

But today we are celebrating an enormous victory for the whales.

The Southern Ocean Whale Sanctuary will soon be safe and the harpoons will be silenced.

We will soon have a South Atlantic Whale Sanctuary.

Whaling has ended in the Southern Hemisphere.

No need to whine about something that has not changed. Instead we need to celebrate the positive. Half of this planet will be safe from the harpoons. All the traditional Southern Hemisphere whaling nations have ended their whaling activities including Australia, Peru, Chile and South Africa. Japan was the last nation killing whales in the Southern Hemisphere.

This decision by Japan is welcome by Sea Shepherd. Thank you, Japan, but keep in mind the fight continues.

Sea Shepherd has intervened against illegal whaling in the Southern Ocean Whale Sanctuary continuously from 2005 through 2017. Sea Shepherd sent down over a thousand volunteers on numerous ships and saved over 6,000 whales from the harpoons. Most importantly Sea Shepherd greatly increased Japanese operational and security costs in addition to making the entire world, including the Japanese public aware of Japan’s illegal activities in the Southern Ocean.

Let's hope that this thesis holds...