Joint statement: We demand the release of Al Jazeera journalists detained in Egypt 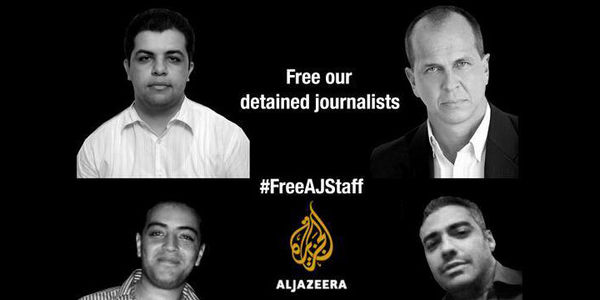 Three Al Jazeera journalists have been detained in Egypt since December 29, 2013, and their colleague Abdullah Elshamy has languished in prison without charge for six months. Since December 29th, the three journalists have been placed in horrible conditions when all they are guilty of is doing their jobs as journalists. On January 29, 2014, the three were among 20 journalists were charged with offenses that include “member of a terrorist organization, disturbing public peace, instilling terror, harming the general interests of the country, possessing broadcast equipment without permit, possessing and disseminating images contrary to the truth."

We, the undersigned individuals, journalists, news and non-governmental organizations who are advocates of press freedom ask the Egyptian authorities to stop their persecution and call for the immediate and unconditional release of Canadian-Egyptian producer Mohamed Fahmy, Australian correspondent Peter Greste and Egyptian producer Baher Mohamed, and all other detained journalists.

We aspire that Egypt be a proponent of democracy by enabling reporters to carry out their professions without fear of retribution and by empowering diverse voices for the purpose of building a greater Egypt with tolerance, civil liberties and understanding.

Learn more about this case on cjfe.org