Save the Cardamom Mountain rain forests in Cambodia! (Petition)

Nine indigenous people and environmentalists were arrested recently for blocking workers and construction equipment from entering Areng Valley in southwestern Cambodia. The activists are working to stop the valley's ancient forest and wildlife habitat from being submerged by a planned dam. Please help us get the project scrapped. 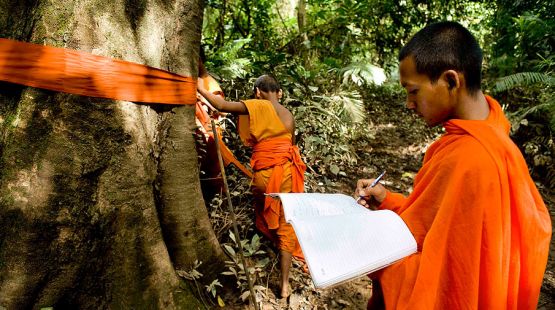 The monks bless, mark and list the ancient trees for their protection.

"We are not giving up until the dam has been stopped for good", says Areng Valley resident Ven Vorn of the indigenous community's two-year struggle to save their homes from a destructive dam.

Nine people were arrested on September 16, 2014 for denying workers and construction machinery access to the valley. The activists have maintained their blockade since March.

The inhabitants of the valley have also taken their protest to the streets of Phnom Penh.

If the Cheay Areng Dam is realized, 20,000 hectares of rainforest – half of which are located in a protected nature reserve – would be flooded. The area is rich in rare and endangered species such as Siamese crocodiles, Asian elephants and clouded leopards. 1,500 indigenous people would be evicted from the land that their families have called home for centuries.

Cambodia’s government awarded Sinohydro Resources, a subsidiary of Powerchina – one of the largest Chinese enterprises with international reach – a permit to build the Cheay Areng Dam. This came after staunch resistance by indigenous people, the grassroots activists of Mother Nature and a network of monks led two other Chinese companies to abandon the project due to concerns over its environmental impact and economic feasibility.

While keeping dambuilders out of the valley, the villagers and Mother Nature have created an ecotourism project, and Buddhist monks are blessing and listing the valley’s trees for their protection. Rainforest Rescue is supporting their activities with fundraising and a tree adoption drive.

The whole valley is threatened by a senseless hydroelectric dam that would not only obliterate the area's culture and biodiversity, but would also generate a minimal amount of electricity and require a very high investment. This chart shows the low power output and high investment of the Areng Dam compared with other hydroelectric projects in Cambodia.

The Areng valley is located in the province of Koh Kong, and its upper reaches form an important part of the Central Cardamom Protected Forest, a precious biodiversity jewel and one of the largest forests of South East Asia. The valley is home to extremely rare species of fauna such as the Siamese crocodile, the white-winged duck, the clouded leopard, the dragon fish, and many more.

The main aims of the campaign are to: empower the local communities so they can effectively stand up against the dam and ensure their rights are respected; raise awareness both inside and outside Cambodia about the threats to this unique ecosystem through the use of mainstream media and social media; coordinate with other civil society groups, such as engaged Buddhist monks, in order to strengthen the campaign; lobby relevant government decision makers for them not to approve the dam; and ensure that all laws relevant to this project are stringently respected.