'The Scream' by Edvard Munch

"It took 12 nail-biting minutes and five eager bidders for Edvard Munch’s famed 1895 pastel of “The Scream” to sell for $119.9 million, becoming the world’s most expensive work of art e...ver to sell at auction.

Bidders could be heard speaking Chinese and English (and, some said, Norwegian), but the mystery winner bid over the phone, through Charles Moffett, Sotheby’s executive vice president and vice chairman of its worldwide Impressionist, modern and contemporary art department. Gasps could be heard as the bidding climbed higher and higher, until there was a pause at $99 million, prompting Tobias Meyer, the evening’s auctioneer, to smile and say, “I have all the time in the world.” When $100 million was bid, the audience began to applaud.

The price eclipsed the previous record, made two years ago at Christie’s in New York when Picasso’s “Nude, Green Leaves and Bust” brought $106.5 million.

Munch made four versions of “The Scream.” Three are now in Norwegian museums; the one that sold on Wednesday, a pastel on board from 1895, was the only one still in private hands. It was sold by Petter Olsen, a Norwegian businessman and shipping heir whose father was a friend, neighbor and patron of the artist.

The image has been reproduced endlessly in popular culture in recent decades, becoming a universal symbol of angst and existential dread and nearly as famous as the Mona Lisa.

Outside of Sotheby’s, there was excitement of a different kind, as demonstrators protesting the company’s longtime lockout of art handlers waved placards with the image of “The Scream” along with the motto, “Sotheby’s: Bad for Art.” Many in the group — a mix of union members and Occupy Wall Street protesters — even screamed themselves when the Munch went on the block. (Munch’s work was an apt focus for the group, said one protester, Yates McKee: “It exemplifies the ways in which objects of artistic creativity become the exclusive province of the 1 percent.”)

Inside, the atmosphere generated by the Munch’s record price carried through the rest of the auction, which saw high prices for everything from Picasso paintings to sculptures by Giacometti and Brancusi.

As is often true of auctions with star attractions, having “The Scream” for sale helped win other business. Its inclusion was a draw, for example, for the estate of Theodore J. Forstmann, the Manhattan financier, who died in November. The top work in his collection was Picasso’s “Femme Assise Dans un Fauteuil,” a 1941 portrait of Dora Maar, the artist’s muse and lover, posed in a chair. The painting went for $26 million, or $29.2 million with fees, within its estimated $20 million to $30 million.

In 2004, Mr. Forstmann bought Soutine’s “Le Chasseur de chez Maxim’s,” a 1925 portrait of an employee at the celebrated French restaurant, for $6.7 million at a Sotheby’s auction. It had belonged to Wendell Cherry, vice chairman of the Louisville-based health care company Humana, who died in 1991, and his wife, Dorothy. On Wednesday night the painting was up for sale again, this time with a $10 million to $15 million estimate, which turned out to be optimistic. Two bidders went for the Soutine, which ended up selling to a telephone bidder, working through Mr. Moffett, for $8.3 million, or $9.3 million with fees.

More popular, however, was an 1892 Gauguin landscape, “Cabane Sous les Arbres,” which Mr. Forstmann had bought at Christie’s in 2002 for $4.6 million. On Wednesday night it was estimated to sell for $5 million to $7 million, but there were four bidders for the canvas, and it sold for $8.4 million.

Surrealism has been the rage recently, and Sotheby’s had many examples to sell. Among the best was Dalí’s “Printemps Nécrophilique,” a 1936 painting that once belonged to Elsa Schiaparelli, the Paris couturier closely associated with the Surrealist movement who collaborated on designs with Dalí. Six bidders fought over the painting, which went for $16.3 million, well above its $12 million high estimate.

Another popular Surrealist image was Ernst’s “Leonora in the Morning Light,” a 1940 painting that depicts his lover, Leonora Carrington, a Mexican artist of English birth, emerging from a lush jungle. It brought $7.9 million, above its $5 million high estimate.

A gilded bronze head that Brancusi conceived and cast in 1911 was another of the evening’s top sellers, bringing $12.6 million, well above its $6 million to $8 million estimate.

But it was the record price for “The Scream” that captured everyone’s imagination. As soon as the hammer fell, rumors began circulating about who the buyer could be. Among the names floated were the financier Leonard Blavatnik, the Microsoft tycoon Paul Allen and members of the Qatari royal family.

While some were surprised at the price, one Munch enthusiast was not: “It’s nice to see the centrality of Norway in the mainstream of western culture,” said Ivor Braka, a London dealer. “The scream is more than a painting, it’s a symbol of psychology as it anticipates the 20th-century traumas of mankind.”

Colin Moynihan contributed reporting. This article has been revised to reflect the following correction:

A earlier version of this article misspelled the of surname of Theodore J. Forstmann, the Manhattan financier, as Fortsmann. It also incorrectly described the position Wendell Cherry, who died in 1991, had held at Humana. He was not chairman."

Photo: The work, is one of four versions created by Edvard Munch; the other three are in museums in Norway. The buyer bid over the telephone. 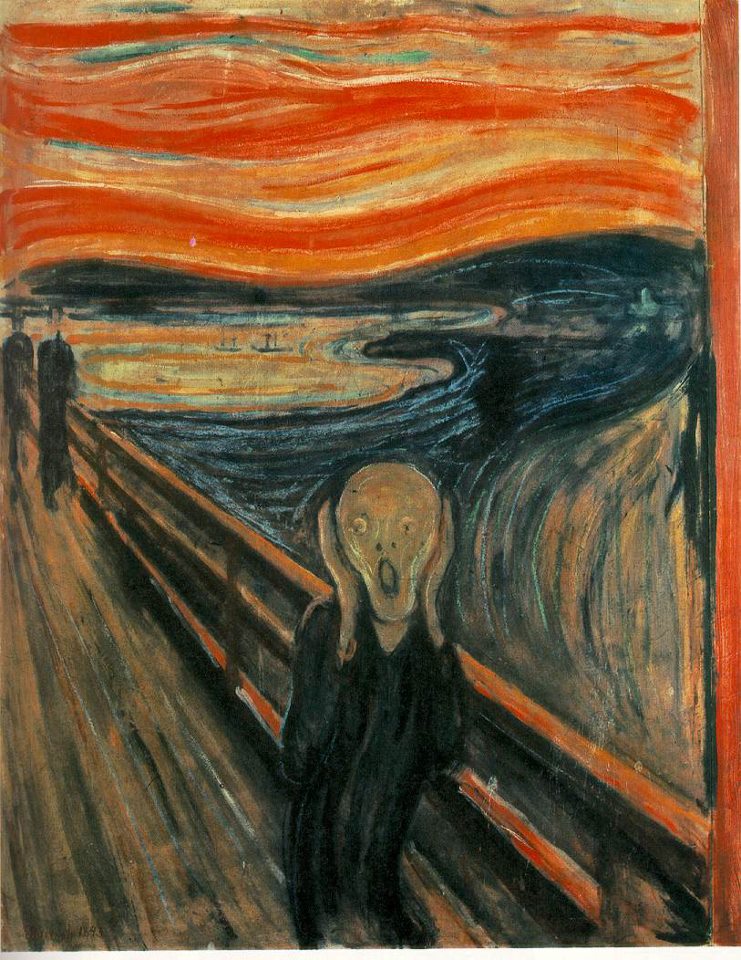 One of the most know painting in the world ... as "la Joconde".

Beauty, Love and Peace for all Beings.