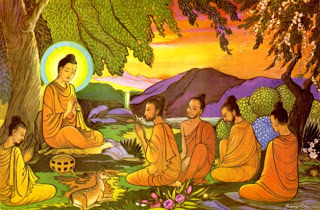 The Buddha’s first teaching was called the Dhammacakkappavattana Sutta, which means the Turning of the Wheel of Truth. It was given on the full-moon day of July, called Asalha.

This discourse was given to the five ascetics who were his former companions, at the Deer Park in Isipatana (now called Sarnath), near Benares, India. Many devas and brahmas (angels and gods) were present to listen to the discourse.

The Buddha started the discourse by advising the five ascetics to give up two extremes. These were indulgence in sensual pleasures and the tormenting of the body (self-indulgence and self-mortification).

He advised against too much sensual pleasure because these pleasures were base, worldly, not noble and unhelpful in spiritual development. On the other hand, tormenting the body was painful, not noble and also unhelpful in spiritual development. He advised them to follow the Middle Way, which is helpful in seeing things clearly, as they are, and in attaining knowledge, higher wisdom, peace, and enlightenment or nirvana. The Buddha said that he was enlightened only after he understood these Four Noble Truths.

The Noble Eightfold Path has eight parts or factors:

2. Right attitude means to have three kinds of thoughts or attitudes:

3. Right speech deals with refraining from falsehood, such as telling lies or not telling the truth; tale-bearing or saying bad things about other people; harsh words and frivolous talk such as gossiping.

5. Right livelihood deals with the five kinds of trade which should be avoided in order to lead a noble life. They are: trading in arms (weapons), living beings (breeding animals for slaughter), intoxicating drinks and poison.

8. Right concentration is one-pointedness of mind as developed in meditation.

These eight factors can be grouped into three smaller groups, as follows:

These three — morality, concentration and wisdom — are the three stages on the path to mental purity whose object is nirvana. These stages are described in a beautiful verse:

To cease from evil,
To do what is good.
To cleanse one’s mind:
This is the advice of all the Buddhas. 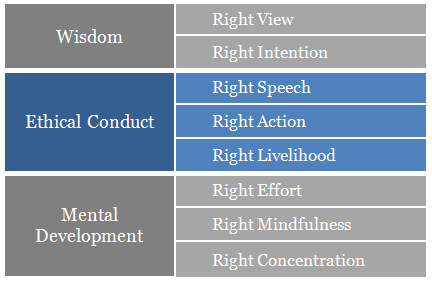 Thank you, dear Sohiniben. Peace and Love we need it all. Wishing you blessings and love my friend.

Nirvana is perceived permanence in impermanence due to loss of past fears & future anxieties leads to freedom in BEING with no stress in the moment in tune with the body rhythms, natural cycles & cosmic passage.

Buddhism is based on two basic tenets: Suffering & Impermanence. Both are eternal & transient in their manifestations & modifications in accordance with the natural laws as laid out. Since it is based on unique personal experiences & valid observations, Buddhism doesn't fall in dispute with any prevailing dogma. When nothing is permanent & change is the only constant reality becomes common sense then how can any further beliefs built on these two accepted qualities as the building blocks to deconstruct the mind and be Presently in the body through breath awareness in the moment be in conflict with change.Moreover having embraced ceaseless change as the only illusion or Maya, Buddhism means CHANGE.

The Passion of the Buddha

-----------------------
The following extract from the book named Siddharth is an actual practice that samanas use to reach the truth which even Buddha did for 6 years before he realized the middle-ground.
“A goal stood before Siddhartha, a single goal: to become empty, empty of thirst, empty of wishing, empty of dreams, empty of joy and sorrow. Dead to himself, not to be a self any more, to find tranquility with an emptied heart, to be open to miracles in unselfish thoughts, that was his goal. Once all of my self was overcome and had died, once every desire and every urge was silent in the heart, then the ultimate part of me had to awake, the innermost of my being, which is no longer my self, the great secret.”

Once upon a time 3 years age i had began writing on buddhism and discontinued. I have attached a copy for your personal perusal & use. I have no copyright over it since it was collected over the internet.