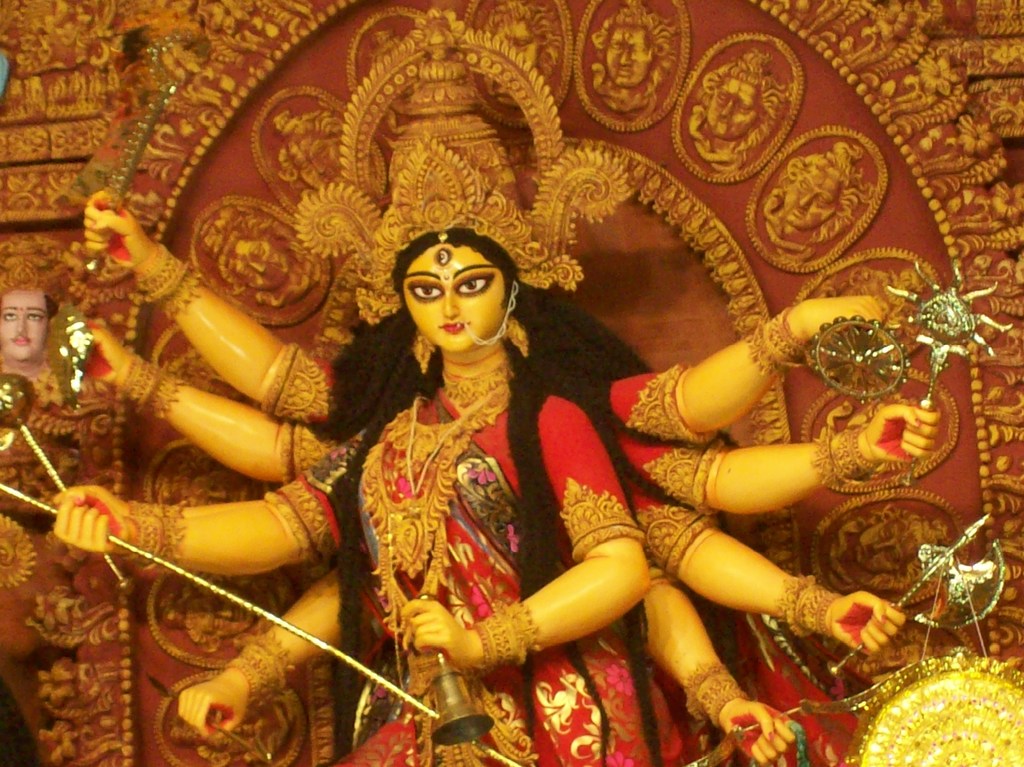 The name Dussehra is derived from Sanskrit Dasha-hara literally means remover of ten referring to Lord Rama's defeat of the ten-headed demon king Ravana. The day also marks the victory of Goddess Durga over the demons Mahishasur. The name Vijayadashami is also derived from the Sanskrit words "Vijaya-dashmi" literally meaning the victory on the dashmi (Dashmi being the tenth lunar day of the Hindu calendar month). 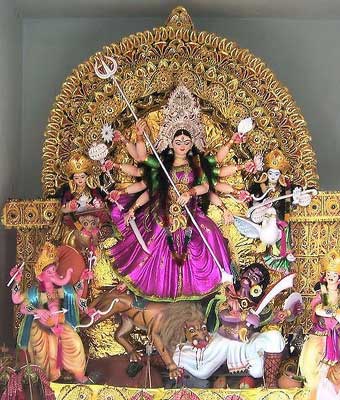 Victory of God Rama over Ravana

On this day in the Treta Yug, Rama, also called Shri Ram, the seventh avatar of Vishnu, killed the great demon Ravana who had abducted Rama's wife Sita to his kingdom of Lanka. Rama, his brother Lakshmana, their follower Hanuman and an army of monkeys fought a great battle to rescue Sita. The entire narrative is recorded in the epic Ramayana, a Hindu scripture.

Rama had performed "Chandi Homa" and invoked the blessings of Durga, who blessed Rama with secret knowledge of the way to kill Ravana. On the day of Ashvin Shukla Dashami, Rama's party found Sita and defeated Ravana. Thus it is termed as Vijaya Dashami. Based on the inferences from Valmiki’s Ramayana, Kalidas’s Raghuvans, Tulsidas’s Ram Charit Manas, and Keshavdas's Ram Chandra Yas Chandrika as well as common perception in India, Rama, Sita, and of Lakshmana returned to Ayodhya on the 30th day of Ashvin (19–20 days after Vijayadashmi). To mark the return of Lord Rama, in the evening, the residents of Ayodhya lit their city with millions of earthen lamps (called Deepak). Since then, this day is celebrated in India as Deepawali or Diwali.

Many people perform "Aditya Homa" as a "Shanti Yagna" and recite Sundara Kanda of Srimad Ramayana for 5 days. These Yagna performances are thought to create powerful agents in the atmosphere surrounding the house that will keep the household environment clean and healthy. These rituals are intended to rid the household of the ten bad qualities, which are represented by 10 heads of Ravana as follows:

Some householders perform Yagnas thrice daily along with Sandhya Vandana, which is also called Aahavaneeya Agni, Grahapatya Agni or Dakshina Agni. In addition, the Aditya Homa is performed with the Maha Surya Mantras and the Aruna Prapathaka of the Yajurveda. These mantras are believed to keep the heart, brain and digestive functions in balance in the absence of adequate sunlight in the winter months.

Victory of Durga Mata over Mahishasura

Some of the demons, or Asuras, were very powerful and ambitious and continually tried to defeat the Devas, or Gods, and capture Heaven. One Asura, Mahishasura, in the form of a buffalo, grew very powerful and created havoc on the earth. Under his leadership, the Asuras defeated the Devas. The world was crushed under Mahishasura's tyranny, the Devas joined their energies into Shakti, a single mass of incandescent energy, to kill Mahishasura.

A very powerful band of lightning emerged from the mouths of Brahma, Vishnu and Shiva and a young, beautiful female virgin with ten hands appeared. All the Gods gave their special weapons to her. This Shakti coalesced to form the goddess Durga. Riding on a lion, who assisted her, Durga fought Mahishasura. The battle raged for nine days and nights. Finally on the tenth day of Ashvin shukla paksha, Mahishasura was defeated and killed by Durga.

Hence Dasha-Hara is also known as Navratri or Durgotsav and is a celebration of Durga's victory. Durga, as Consort of Lord Shiva, represents two forms of female energy - one mild and protective and the other fierce and destructive. 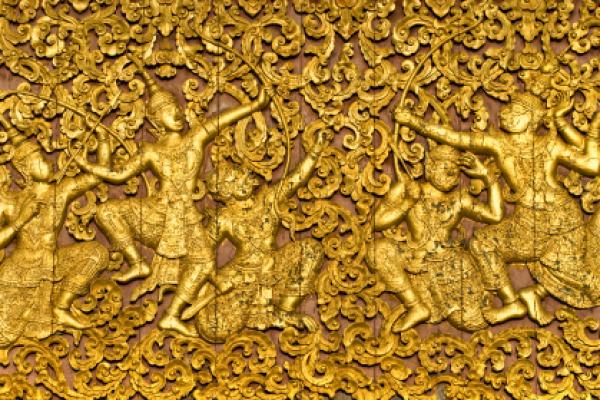 Ramayana epic carved on a wooden door inside a temple

Daksha, the Lord of the Earth, and his wife Prasuti, had a daughter called Sati. As a child, Sati started worshipping Lord Shiva as her would-be-husband. Lord Shiva was pleased with the Sati's worship of him and married her. Daksha was against their marriage but could not prevent it. Daksha arranged a yagna to which everyone except Lord Shiva was invited. Sati, feeling ashamed of her father's behaviour and shocked by the attitude meted towards her husband, killed herself. Lord Shiva was anguished when he discovered this. He lifted Sati's body on his shoulders and started dancing madly. As the supreme power was dancing with wrath, the world was on the verge of destruction.

Then Lord Narayana came forward as a saviour and used his Chakra to cut Sati's body into pieces. Those pieces fell from the shoulders of the dancing Shiva and scattered throughout the Indian subcontinent. Shiva was pacified when the last piece fell from his shoulder. Lord Narayana revived Sati. The places where the pieces of Sati fell are known as the "Shakti Piths" or energy pits. Kalighat in Kolkata, Kamakshya near Guwahati and Vaishnav Devi in Jammu are three of these places.

In her next birth, Sati was born as Parvati or Shaila-Putri (First form of Durga), the daughter of Himalaya. Lord Narayana asked Shiva to forgive Daksha. Ever since, peace was restored and Durga with her children Saraswati, Lakshmi, Kartikeya, Ganesh and her two sakhis - Jaya and Vijaya visit her parents each year during the season of Sharatkal or autumn, when Durga-Puja is celebrated.

Thanks for enlarging our knowledge about this culture.

May all Biengs realise they are already awaken.