Shams of Tabriz was known as a vagabond beggar. with no home he was a wanderer. as a young man he was found to be worthy to receive the gift of gifts from the master of his day.

and he was told at that time that he himself would reveal the gift to just one person in his lifetime, one influential person.

so Shams travelled and sat outside of many courts and palaces and influential peoples homes looking to find the one that was worthy to receive the gift from him. he was steadfast, uncompromising and quite direct and blunt in his approach. Years went by with no interest shown from anyone he came across or deigned to speak with.

After no less than 25 years of wandering travel he came to the garden of a renowned professor.

a man whose own father had been equally renowned as a professor before him. a man that had many students who came from far away to study under him. a man called Rumi.

Shams arrived in the garden at night with a bright moon in the sky and sat down next to a small lake surrounded by trees and bushes. at the time Rumi was working late in the night writing his lifes work when he chose to take a break and visit his garden for air and repose.

when discovering Shams they began to talk and Rumi became excited as the discussion made him want to show Shams his writings which he had been working on for years. he left and returned with a large pile of papers all full of words.

Shams took them from him and without looking threw them high in the air over the lake. they landed in the water, floated, sank and were destroyed. Rumi was aghast but Shams calmed him by saying he would show him that, about which he was trying to write. and so they retired to the house

Days went by and there was no sign of any comings or goings. Students became increasingly upset from feeling deprived of their professor. Rumour had it that he was kidnapped and held against his will by a beggar. they banged on the door but there was no answer.

After many days had passed the doors flew open and Rumi emerged whirling and dancing in the front of his home. Shams followed quietly behind. In the following weeks they were continually in each others company and the students became jealous, angry and upset saying amongst themselves that Rumi had been caught in a spell caste by the beggar.

Now a time came when the students planned to get rid of Shams and unbeknown to Rumi they seized him. they killed him and threw his body into a deep dry well..... (to be continued)

marvellous, when does it continue? 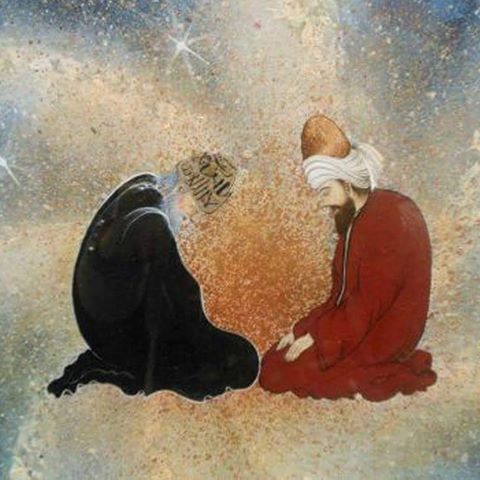 I thought the same...

well it continues here and now .......  The students did not mention what they had done but Rumi asked them and asked them what had become of Shams. they said they thought that he had returned to Tabriz.  and so Rumi followed on the the most direct road hoping to catch up with him on the way.. arriving into Tabriz Rumi began to ask everyone about Shams, if they had seen him or where he might be found. Some remembered him but no one had seen him or was able to help. Finally Rumi began to despair and when he was asked what he would do next he answered that it didn't matter what he did or where he went and he set off directionless into the waste desert..

Months passed and Rumi wandered but eventually he returned to his home. He made no accusations although i suspect he must have suspected. he began his life as a master and divine poet. i feel the words from this clip i leave you with may well have passed between Shams and Rumi. .. weep, my brothers and sisters in life. listen and weep..:   RUMI The Greatest Love Poems of All Time Vol 1 - YouTube

Thank you so much for this..

... and thank you Eva for adding a great picture of the two together.

First meeting of Rumi (on horseback) and Schams-e Tabrizi (in a dark dervish robe). Turkish miniature around 1600 Wonderful. Thank you for sharing.