Turkey has downgraded diplomatic ties with Israel and suspended military co-operation between the countries as the UN released its report into Israel's deadly raid of a Gaza-bound ship.

Ahmet Davutoglu, the Turkish foreign minister, announced the measures on Friday, hours before Ban Ki-moon, the UN secretary-general, formally received the report, details of which were leaked to the media.

A statement from the Israeli prime minister's office said, "Israel hopes to find a way to overcome the dispute and will continue to work towards this goal".

Turkey has long demanded an Israeli apology over the May 31, 2010, incident aboard the Mavi Marmara in which eight Turkish nationals and an American man of Turkish descent died when the vessel was stormed by Israeli commandos. 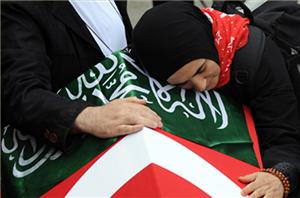 Israel firm on not apologising over flotilla

Israel sticks to refusal to apologise to Turkey for killing nine of its citizens on Gaza-bound aid ship last year. ( 17-Aug-2011 )


The Israeli government has refused several times to make such a gesture.
"Israel, in fact, has misused many of the chances that were given to them and the Israeli government, on the other hand, see themselves [as being] above international laws and human conscience," Davutoglu said.
He said Turkey expelled the Israeli ambassador and lowered diplomatic relations with Israel to second secretary level, recalling all envoys above that grade - including the ambassador - back to Ankara.
All military agreements had been suspended, Davutoglu said, and Turkey will bolster its naval presence in the eastern Mediterranean.
"Our aim here is not to hurt our friendship but to return this friendship to its right track," Davutoglu said.
Turkey does not recognise Israel's blockade on Gaza as legal and will take the matter to the International Court of Justice, he concluded.
The 'Palmer Report'
The release of the UN-mandated inquiry into the Mavi Marmara incident, headed by Geoffrey Palmer, a former prime minister of New Zealand, had been delayed three times, to allow for fruitless rapprochement talks between Israel and Turkey.
The 105-page report stated that Israel's actions were "excessive and unreasonable".


Ahmed Youssef, a Hamas official, rejected the finding that Israel's blockade on the territory is lawful


"Israel's decision to board the vessels with such substantial force at a great distance from the blockade zone and with no final warning immediately prior to the boarding was excessive and unreasonable," it said.
It said, however, that the six-vessel aid flotilla "acted recklessly in attempting to breach the naval blockade" set up by Israel around Gaza.
Joseph Ciechanover, Israel's representative to the UN inquiry, said: "Given these circumstances, Israel's soldiers clearly acted in self-defense and responded reasonably, proportionally and with restraint, including the use of less-lethal weapons where feasible".
The report said Israel's naval blockade of the Gaza Strip was "legitimate", complying with "the requirements of international law".
The inquiry called for Israel to make "an appropriate statement of regret" for the raid and pay compensation to the families of the dead, as well as to injured victims.
Turkey and Israel should resume full diplomatic relations "repairing their relationship in the interests of stability in the Middle East," the report said.
Hamas, which controls Gaza, said the inquiry into the flotilla aid bound for Gaza was "unjust" and lacked balance.
Prospect of belated apology
While Turkey's downgrading measures are a definite blow to Israel's foreign relations, Al Jazeera's Cal Perry said the report validated the legitimacy of the Israeli blockade of Gaza.
"I think the one positive [Israel] can take away from this is that the report declared the Gaza blockade legal," our correspondent, reporting from Jerusalem, said.
"The report said the Israelis did not act in any illegal fashion, although it said they were overly aggressive when they assaulted the ship."
It is unclear whether Turkey's actions will prompt Israel to issue an apology, but it might do something similar to its recent expression of "regret" to Cairo over a near-border incident that killed five Egyptian security officers, Perry said.
"I think we can expect to hear something that tries to tread sort of along the middle line."
The statement from the Israeli PM's office also said: "As for the Israeli ambassador to Turkey, he had completed his term a few days ago, regardless [of Turkey's expulsion] and has already parted with his Turkish colleagues, expected to return to Israel in the coming days".
Source: Al Jazeera and agencies