Opera a highlight of Tibet Week 2013

A Tibetan opera, "Sukyi Nyima" meaning "As Radiant As the Sun," will be performed in conjunction with Tibet Week at Emory this year.

Tibet Week, the annual celebration of the culture of traditional and contemporary Tibet, is March 25-29. 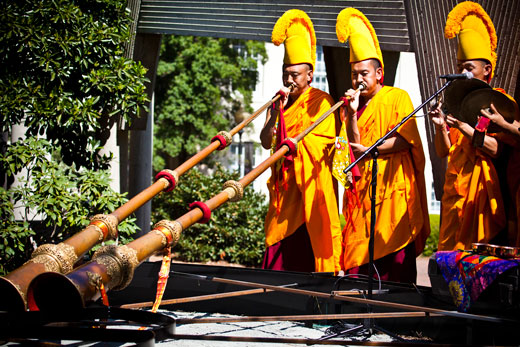 "Each year Tibet Week gives the Emory community an opportunity to celebrate Tibetan culture in its many diverse forms," says Kari Leibowitz, program coordinator for the Emory-Tibet Partnership.

Tibet Week events, which take place daily, include lectures, panel discussions, meditation, films and music.  All will be in the Carlos Museum Reception Hall unless otherwise noted.

"This year we are particularly excited to have events such as a talk by the Honorable Lobsang Nyandak, His Holiness the Dalai Lama's representative to the Americas, as well as a number of events leading up to the Tibetan Opera that will take place in April," says Leibowitz.

An introduction to Tibetan opera, or ache lhamo, will be given by ethno-musicologist Isabelle Henrion-Dourcy interspersed with musical selections by resident artist Techung. Entitled "Sukyi Nyima in Context: The Performance of Tibetan Folk Opera," this lecture-demonstration will be Wednesday, March 27, at 7:30 p.m. The opera itself will be performed Saturday, April 6, at 4 p.m. in Cannon Chapel.

The live exhibition of the mandala sand painting, conducted by the monks of the Drepung Loseling Monastery, is a central feature of the celebration. It begins at 1 p.m. on Monday, March 25, following the opening ceremony at noon, and continues to 5 p.m. For the remainder of the week, sand painting begins at 10 a.m. and concludes at 5 p.m. The monks will be constructing the sand mandala of Bhaishajayaraja Guru or Healing Kin Guru.

"From Monks to Scientists: The Journey of Six Monks at Emory" is a panel discussion on Thursday, March 28, at 7:30 p.m. It will feature Geshe Lhakdor and Emory's Tenzin Gyatso discussing the challenges and rewards of bringing modern science to the Tibetan monastic curriculum and the experience of Tibetan monks on Emory's campus.

"Self-Immolation: The Non-Violent Protest of Last Resort" is the topic of a talk by Lobsang Nyandak, His Holiness the Dalai Lama's Representative to the United States, about the more than 100 Tibetan self-immolations and the Tibetan Buddhist cultural attitude towards confronting injustice. The talk will be followed by "A Window into Tibet: Assessing the Flow of Information" by Sherab Woeser, editor-in-chief of Phayul.com. These will be Tuesday, March 26 at 7:30 p.m.;

Meditation will be held each day of Tibet Week at 5 p.m., facilitated by various campus leaders.

The closing ceremony by the Drepung Loseling monks begins at 1 p.m. on Saturday, March 30. Geshe Lobsang Tenzin Negi, director of the Emory-Tibet Partnership and senior lecturer of religion, will give a talk, "Symbolism of the Mandala."

Also in conjunction with the special week, the Emory-Tibet Science Initiative will host the 5th International Conference on Science Translation into Tibetan from March 25-29.

Those pursuing a contemplative moment are invited to visit Emory's Living Mandala, located in Pitts Garden between Cannon Chapel and the Quad.

"During Tibet Week, in only one day, you can participate in a meditation session, attend a talk about traditional Tibetan medicine and its applicability to modern science, and watch monks paint a sand mandala," Leibowitz points out.

The week's events are sponsored by the Emory-Tibet Partnership, the Michael C. Carlos Museum, the Claus M. Halle Institute for Global Learning, the Shelley and Donald Rubin Foundation, the Department of Religion at Emory, Drepung Loseling Monastery, the Center for International Programs Abroad, Emory College Council, the Hightower Fund, the Emory Chapter of Students for a Free Tibet, and the Dalai Lama Trust.

Emory University's living mandala is a new, rare garden on Emory's designed to inspire peaceful reflection, compassion and harmony. It's located in Pitts Garden between Cannon Chapel and Emory's quadrangle and is just the second in the world.  In a consecration ceremony March 28, Buddhist monks from Drepung Loseling Monastery blessed the mandala following prayers by other religions.