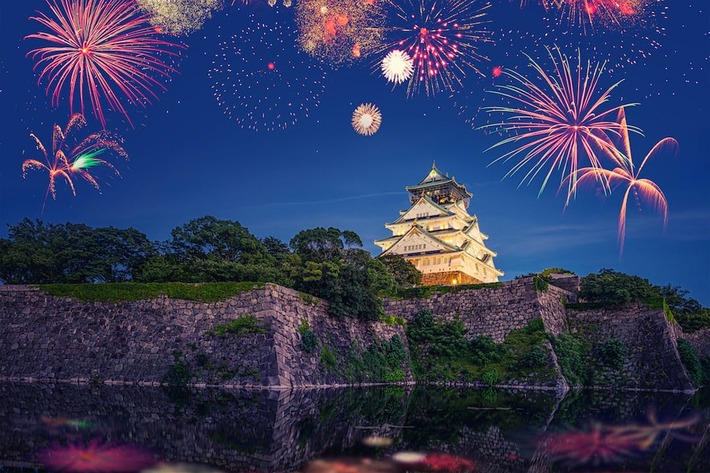 Fireworks and champagne might be common worldwide, but have you heard of these other, more local New Year’s traditions? Although much of the world festively rings in a new year each December 31, we don’t all celebrate the same way. In the United States, fireworks and a kiss with a loved one at the stroke of midnight are familiar year-end customs, but in other countries, New Year’s traditions are as varied as the nations that celebrate the occasion. From Spain to Japan, these are 11 different New Year’s traditions from around the world. 1. Various countries: Eating lucky foods Throughout the world, New Year’s Eve is celebrated with a meal in the company of friends and family. In some places, this means eating specific “lucky” foods. In Spain, Portugal, and much of Latin America, for example, it’s 12 grapes or raisins, and in Italy, 12 spoonfuls of lentils—one with each of the 12 chimes of the clock at midnight. The French usher in the New Year with a stack of pancakes. Germans prefer marzipan shaped into a pig for luck, whereas in the Netherlands, people eat doughnuts and ring-shaped foods. Estonians feast as many as 7, 9, or even 12 times on New Year’s Eve, as they believe for each meal consumed, the person gains the strength of that many men the following year. 2. Greece: Hanging and smashing pomegranates ADVERTISEMENT Podariko, a Greek custom that roughly translates to “good foot,” aims to bring luck at the start of the year. Before the holiday, households will hang pomegranates, thought to be a sign of luck, prosperity, and fertility, from their door. Then, on New Year’s Eve just before midnight, everyone will shut off the lights and leave the house so they can send a lucky individual to be the first to reenter the house, right foot first. When done correctly, it brings the family good fortune for the year. Afterward, a second person will take the pomegranate in their right hand and smash it against the door to see just how much luck—the more of the juicy seeds that spill out, the more luck the new year will bring. 3. Switzerland: Dropping cream on the floor The Swiss drop a dollop of cream on the floor, which is believed to bring luck, wealth, and peace in the coming year. 4. Germany: Melting lead to glimpse into the future In much of German-speaking Europe, as well as Finland, Bulgaria, Czech Republic, and Turkey, it’s customary to heat small pieces of lead, then cast them in cold water and make a prediction for the year based on the shapes that form. For example, if a ball forms, luck will roll your way. These days, kits throughout German-speaking countries include tin (rather than lead) figurines to melt. 5. Russia: 12 seconds of silence before midnight Russians say thank you to the past year by remembering its most important events during the hours leading up to midnight, and they use 12 seconds of silence before the stroke of midnight to make wishes. 6. Catalonia: Searching for the man with many noses ADVERTISEMENT In the Catalonia region of northern Spain, a special character appears on the last day of the year. L’home dels nassos, or the man with many noses, has as many noses as there are days left in the year—and he grants wishes, if you can find him. Children are encouraged to look for him, rarely realizing that on the last day of the year, he only has one nose left and is, therefore, hard to spot. 7. Scotland: Hogmanay In Scotland, Hogmanay is an end-of-year party that starts on December 30 and ends on New Year’s Day. There are many variations of Hogmanay celebrations throughout the country, but the most common tradition is that of “first footing,” which involves being the first to visit friends and neighbors, often with a symbolic gift in hand. If you happen to be in Edinburgh for the festivities, you can expect to see pipers and drummers leading torch-wielding locals on a procession throughout town on December 30. And on New Year’s Day, the party ends with a bracing swim in the chilly waters of the Firth of Forth. 8. Denmark: Jumping into the new year—literally At midnight, Danes will jump off a chair or sofa—literally jumping into the new year. It’s seen as good luck if you do, and bad luck if you don’t, so be sure to take a leap if you ever ring in the new year in Denmark. 9. Ireland: Setting a place at the table for loved ones who passed away The Irish have several New Year’s traditions—such as banging the outside walls of their houses with bread to keep away bad luck and spirits, and starting the year with a spotless, freshly cleaned home. But one of the most well-known is setting an additional plate out at the dinner table for any loved ones lost in the prior year. Italians and Spaniards both wear red underwear for luck. However, Spaniards insist the underwear must also be new to be lucky. Italians take the new concept a step further, throwing old items out the window to symbolize the coming of new things with the New Year. 11. Japan: Visiting a temple for lucky charms Japan’s New Year’s traditions have a wholesome focus. Shōgatsu (New Year) is usually celebrated with a visit to the local temple to exchange last year’s lucky charms for new ones. Afterward, people will feast on traditional New Year foods, such as prawns (believed to bring a long life) and herring roe (to boost fertility). This article originally appeared online in December 2015; it was updated on December 29, 2021, to include current information.