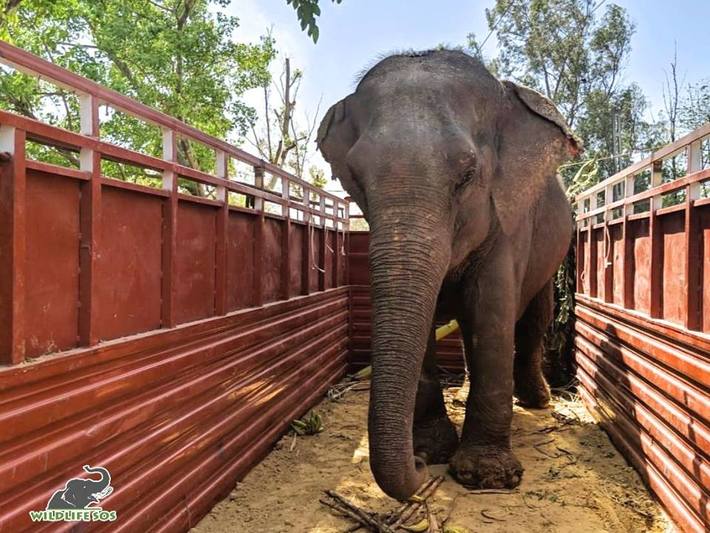 We are delighted to report that Daisy, a 51 year old begging elephant who has been living on the streets of Delhi for decades, has just been rescued. Just a short while ago, she arrived at the Elephant Rehabilitation Center (ERC) located in the picturesque Ban Santour Forest of Yamuna Nagar in Haryana. There she joins elephants Lilly, Erika and Ella, in a lush forest with endless acres to explore. The elephant center is run by the Forest Department in collaboration with Wildlife SOS.

Daisy was used for begging and wedding processions in the busy streets of Delhi. Her poor health condition shows how hard she was worked and how poorly she was cared for. Daisy has overgrown footpads and cracked toenails. She is blind in her right eye and can see partially with her left eye. Her ears are torn from the use of a bullhook.

Delhi has a population of almost 20 million. It is a dangerous and dismal place to be an elephant, and we have been working with the Government to get all of the elephants out of the city.

We will keep you updated as we learn more about Daisy’s history, her personality, and her condition. Until then, we hope you will join us in welcoming Daisy to the Wildlife SOS family.

That is great news!

Although she's only been here a few hours, Daisy has wasted no time in settling in and enjoying herself. After decades of working hard in the chaotic Delhi streets, we imagine this new life must feel magical to her. Welcome to the herd, Daisy. We are so happy to have you with us!

Can you spot our newest ele-friend?
Daisy spent the entire day foraging in the lush green forest at #ElephantRehabilitationCenter, Haryana.
She was spotted munching on greens, totally at peace, feeling at home! Permalink Reply by Carmen Elsa Irarragorri-Wyland on April 18, 2019 at 2:27am