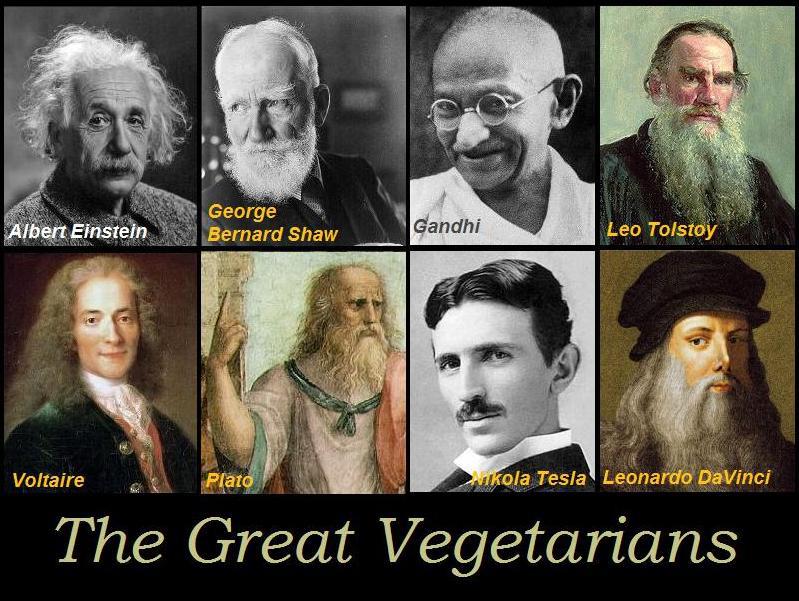 These great vegetarians, such as Pythagoras, Plato, Leo Tolstoy, Mahatma Gandhi, Albert Einstein, George Bernard Shaw, Nikola Tesla, Shopenhauer, Thoreau, Leonardo Da Vinci, Voltaire etc. knew there could be no spiritual advancement while attaining ones nourishment from cruelty and the exploitation of others.

Albert Einstein: "Nothing will benefit human health and increase the chances for survival of life on Earth as much as the evolution to a vegetarian diet."

Charles Darwin: "The love for all living creatures is the most noble attribute of man."

Thomas Edison: "Non-violence leads to the highest ethics, which is the goal of all evolution. Until we stop harming all other living beings, we are still savages."

George Bernard Shaw: "We pray on Sundays that we may have light to guide our footsteps on the path we tread; We are sick of war we don't want to fight. And yet we gorge ourselves upon the dead."

Percy Bysshe Shelley: "Let the advocate of animal food force himself to a decisive experiment on its fitness, and as Plutarch recommends, tear a living lamb with his teeth and, plunging his head into its vitals slake his thirst with the steaming blood."

Henry David Thoreau (1817-62), U.S. philosopher, author, naturalist. Walden, "Economy" (1854): One farmer says to me, "You cannot live on vegetable food solely, for it furnishes nothing to make bones with"; and so he religiously devotes a part of his day to supplying his system with the raw material of bones; walking all the while he talks behind his oxen, which, with vegetable-made bones, jerk him and his lumbering plow along in spite of every obstacle.

Henry David Thoreau: I have no doubt that it is a part of the destiny of the human race, in its gradual improvement, to leave off eating animals, as surely as the savage tribes have left off eating each other when they came in contact with the more civilized.

Mark Twain: It is just like man's vanity and impertinence to call an animal dumb because it is dumb to his dull perceptions.

Benjamin Franklin: Flesh eating is "unprovoked murder." On the subject of vegetarianism, Franklin noted that one will achieve "greater progress, from the greater clearness of head and quicker comprehension."

Thomas A Edison, 1847-1931: "The Doctor of the future will give no medicine, but will interest his patient in the care of the human frame, in diet, and in the cause and prevention of disease."

Francis of Assisi: "Not to hurt our humble brethren is our first duty to them, but to stop there is not enough. We have a higher mission-to be of service to them wherever they require it."

Mahatma Gandhi: "To my mind the life of a lamb is no less precious than that of a human being. I hold that, the more helpless a creature, the more entitled it is to protection by man from the cruelty of man."

Abraham Lincoln: "I am in favor of animal rights as well as human rights. That is the way of a whole human being."

Thomas Paine: "Everything of persecution and revenge between man and man, and everything of cruelty to animals, is a violation of moral duty."

Henry Salt: "The emancipation of men from cruelty and injustice will bring with it in due course the emancipation of animals also. The two reforms are inseparably connected, and neither can be fully realized alone."

Albert Schweitzer: "...the time is coming when people will be amazed that the human race existed so long before it recognized that thoughtless injury to life is incompatible with real ethics. Ethics is in its unqualified form extended responsibility to everything that has life."

George Bernard Shaw: "Vivisection is a social evil because if it advances human knowledge, it does so at the expense of human character."

Leo Tolstoy: "If a man aspires towards a righteous life, his first act of abstinence is from injury to animals."

Alice Walker: "The animals of the world exist for their own reasons. They were not made for humans any more than black people were made for whites, or women created for men."

President Abraham Lincoln: I care not for a man's religion whose dog and cat are not the better for it.

Pythagoras: Animals share with us the privilege of having a soul.

Pythagoras: The earth affords a lavish supply of richness of innocent foods, and offers you banquets that involve no bloodshed or slaughter; only beasts satisfy their hunger with flesh, and not even all of those, because horses, cattle, and sheep live on grass.

George Bernard Shaw: A man of my spiritual intensity does not eat corpses.

George Bernard Shaw: Animals are my friends; I don't eat my friends.

John Robbins (p. 49 Diet for a New America): Our understanding of what constitutes intelligence is utterly relative. If an aborigine drafted an I.Q. test, for example, all of Western civilization would probably flunk. We have a very convenient and self-serving way of defining intelligence. If an animal does something, we call it instinct. If we do the same thing for the same reason, we call it intelligence.

Mohandas (Mahatma) Gandhi: "To my mind the life of a lamb is no less precious than that of a human being. I hold that, the more helpless a creature, the more entitled it is to protection by man from the cruelty of man."

"I was a cannibal for twenty-five years. For the rest I have been a vegetarian." ~ George Bernard Shaw

In addition to his writings on non-violence, Leo Tolstoy's advocacy of vegetarianism led to his friendship with Mohandas Gandhi. He wrote several essays about vegetarianism, but perhaps never more compellingly than when he said: "flesh eating is simply immoral, as it involves the performance of an act, which is contrary to moral feeling: killing."

Nikola Tesla was a humanitarian who loved animals. He argued that animal slaughter was “wanton and cruel” and eventually became a vegetarian.

Voltaire was an advocate of civil rights and freedom. He also believed in the virtues of vegetarianism. He once wrote that "men fed upon carnage, and drinking strong drinks, have all an impoisoned and arid blood which drives them mad in a hundred different ways." This sounds like an early precursor of the phrase "you are what you eat."