Chatelaine Awards ‘Women of the Year’ to Wet’suwet’en Matriarchs

Magazine’s editor cites the significance of a ‘non-violence movement led by female Elders.’ 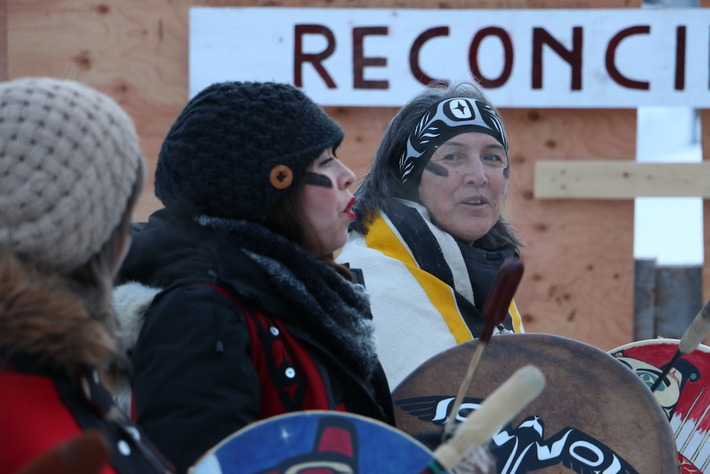 It’s a long way from the Toronto head office of Chatelaine, one of Canada’s most popular women’s magazines, to the Unist’ot’en Healing Centre 66 kilometres down a gravel logging road in northern British Columbia.

Despite the distance, the glossy mag, which is read by more than 3.5 million Canadians, recognized three matriarchs from the Unist’ot’en house group of the Wet’suwet’en Nation — Freda Huson, her sister Brenda Michell (Geltiy) and niece Karla Tait — as Women of the Year in its current issue.

“I was surprised,” says Huson, whose traditional name is Howilhkat, her voice breaking up periodically over the satellite internet connection from her home at the healing centre. “They just said it was for women that were protecting the lands. They didn’t say it was for Women of the Year.”

The recognition acknowledges the role of women in the Wet’suwet’en resistance to pipelines through their territory — a resistance that has been both peaceful and powerful, beginning a decade before it caught the attention of the nation earlier this year.

Over five days in February, RCMP arrested 28 land defenders at a series of camps blocking Coastal GasLink from accessing the route where it is building a 670-kilometre gas pipeline. The arrests came to an end outside the healing centre when Huson, Michell and Tait, along with four supporters, were taken into custody.

The standoff reverberated across the nation, leading to dozens of solidarity actions that shut down roads, railways and shipping routes. But opposition to pipelines began on Unist’ot’en territory years before the $40-billion Coastal GasLink pipeline, which would pass within a kilometre of the healing centre, was proposed.

When Huson first made her home at the centre 11 years ago, it was Enbridge’s Northern Gateway, a diluted bitumen pipeline that has since been cancelled, that was on the table. A gate at the Morice River bridge — the boundary between Unist’ot’en and neighbouring Gidimt’en territory — kept workers out.

For nearly a decade, Huson hosted culture camps at the site, which was chosen for its proximity to clean water, abundant wildlife and cultural significance.

But in December 2018, the courts granted an interim injunction to Coastal GasLink, and early in the new year RCMP removed barricades set up by Gidimt’en clan members and arrested seven people. Three days later, hereditary chiefs allowed pipeline workers into the territory while a permanent injunction was before the court.

On Dec. 31, 2019, the B.C. Supreme Court granted that injunction and hereditary chiefs responded by closing the Morice forestry road and evicting Coastal GasLink, beginning the five-week standoff that took place earlier this year. 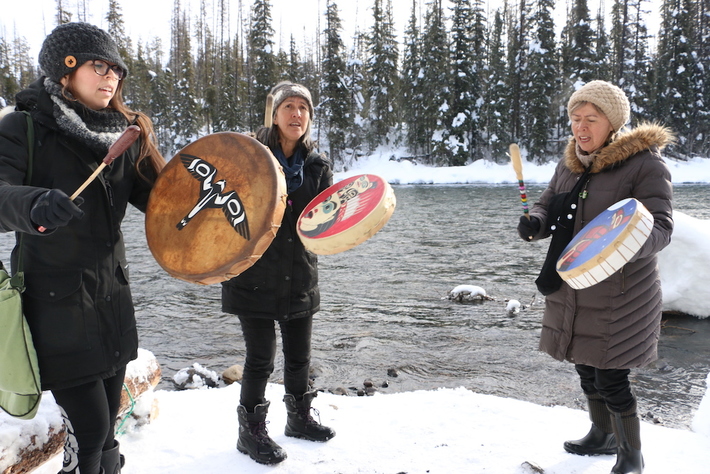 Wet’suwet’en matriarchs (L-R) Brenda Michell (Geltiy), Karla Tait and Freda Huson (Howilhkat) drum and sing to call in the ancestors in the days leading up to their arrest at the Unist’ot’en Healing Centre on Feb. 10. Photo by Amanda Follett Hosgood.

When Huson, Michell and Tait were arrested on Feb. 10, they were singing and drumming traditional songs to call on their ancestors. Huson says that while protecting the land and water is everyone’s responsibility in Wet’suwet’en culture, the matrilineal clan system gives women a unique role in sustaining the resources for future generations.

“Because our ancestors sustained them for us, it’s our job to do the same for the next generation, to ensure they have water, the salmon that spawn in this river and everything that our lives depends on,” she says.

“We don’t want our children to tell historical stories of what used to be. We want them to enjoy the same benefits we’re enjoying because the women before us did the same for us, and now they’ve handed up the torch to us to do the same for the next descendants.”

In addition, the women honoured murdered and missing Indigenous women and girls, a social issue often linked with industrial work camps, by hanging dozens of red dresses along the road as RCMP were making arrests last winter. 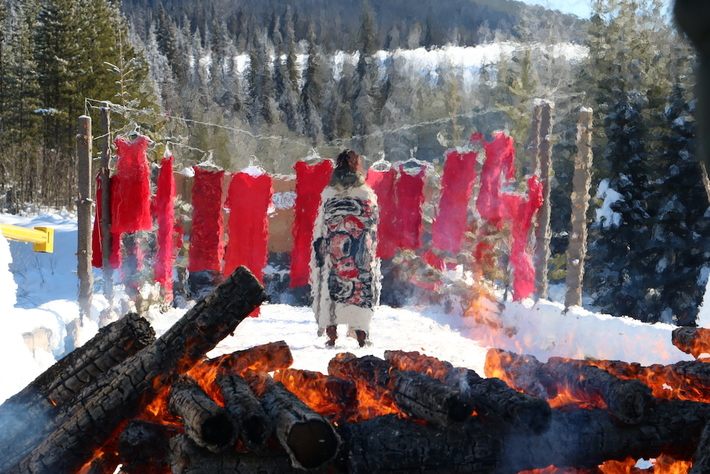 In addition to recipes and beauty tips, Chatelaine’s editorial department tackles social issues including, according to the magazine, “portraits and interviews with inspiring women… highlighting current topics from a feminine — and even feminist — perspective.”

In an email, the magazine’s executive editor, Denise Balkissoon, said the matriarchs were an obvious choice.

“The pandemic has overshadowed almost everything, but we didn’t want anyone to forget how powerful the Wet’suwet’en standoff was last winter,” she says. “The matriarchs led a resistance that shook the entire country. The turnout at cross-country actions was huge — non-Indigenous people in Canada are starting to get what ‘unceded’ means and understand that Indigenous rights are crucial to climate action.

“There was also real, broad discussion about the links between resource extraction and the tragedy of murdered and missing women. All this, from a non-violence movement led by female Elders. Clearly, they’re women of the year.”

Huson says Coastal GasLink is going “full force” with pipeline construction. In its November update, the pipeline builder says 9A Lodge, a labour camp located near the healing centre, is now accommodating 81 workers and that traffic in the area is expected to increase as pipe is transported from a storage site to the project route.

Meanwhile, the healing centre continues to operate with modified programming due to the pandemic. Guests are required to self-isolate before arriving and divided into pods at the centre, and social distancing and masks are required. Huson says activities are done outdoors.

With court actions and blockades behind them, she says she’s relying on her spiritual beliefs moving forward.

“More and more people will wake up.”

Amanda Follett Hosgood is The Tyee’s northern B.C. reporter. She lives amidst the stunning mountains and rivers of Wet’suwet’en territory.

Permalink Reply by Carmen Elsa Irarragorri-Wyland on November 30, 2020 at 5:33pm

I do hope for what they hope for...

Permalink Reply by MARGARIDA MARIA MADRUGA on December 1, 2020 at 8:17pm

I hope they can do it. God bless them.