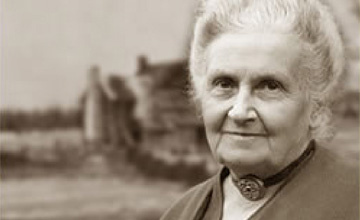 Maria Montessori, inspired by the role of her mother was a life-long feminist breaking down barriers which tried to exclude women.  She insisted to be allowed to enter medical school in Rome at a time when the school had only men as students, thus becoming one of the first Italian female M.D. in Italy in 1896. She became known for her work with illiterate children at her Casa dei Bambini, a school set up in 1907 in a building in the slums of Rome. There she developed her own principles of learning.  Montessori had been strongly influenced by the tactile educational methods used for deaf-mutes and retarded children that had been created by two French physicials Jean Itard and his student Edward Seguin.  She took special interest in the retarded and slow-learning children who were locked up in wards without toys or learning materials of any kind.

In her Casa dei Bambini, she developed a system to help children distinquish letters, geometric shapes and colors through the use of tactile materials.  The children were allowed to move freely in the classroom and to progress at their own pace.  They became so involved with the didactic materials that they chose them over toys and began exhibiting new powers of concentration and conflidence.  As the system evolved, she also introduced child-size furniture and new elements to the curriculum that related closely to the daily life of the child, such as gardening, gymnastics, tendings plants and pets, and preparing a communal meal.

In her writings Montessori drew from a variety of sources including psychoanalytic insights concerning the unconscious, which challenged the adult-centric perceptions of early childhood.  She argued for a child's dignity and autonomy. In The Secret of Childhood she wrote “The adult has become egocentric in relation to the child, not egotistic, but egocentric.  Thus he considers everything that affects the psyche of the child from the standpoint of its reference to himself, and so misunderstands the child.  It is this point of view that leads to a consideration of the child as an empty being, which the adult must fill by his own endeavours, as an inert and incapable being for whom everything must be done, as a being without an inner guide, whom the adult must guide step by step from without. And in adopting such an attitude, which unconsciously cancels the child's personality, the adult feels a conviction of zeal, love and sacrifice”.  (1)

Her emphasis on developing the potential of each child was part of a then new educational current as seen in the efforts of Percy Nunn and the New Education Fellowship in England, Ovide Decroly in Belgium, John Dewey in the USA and Rudolf Steiner in Germany.  Like Steiner, Montessori believed in the existence of “sensitive periods” or critical phases for learning, largely set out by age.  She argued that children have a unique consciousness and a special sensitivity in the early years, which must be nurtured and allowed to develop along its own course. She viewed the child as a “Spiritual Embryo” that contains within itself “a pattern of psychical instinct of functions that will set it in relation to its environment.”  Montessori also placed great emphasis on the value of cooperation and of early childhood as being an important step in education for peace.

In 1934, the Fascist government of Mussolini closed the Montessori schools in Italy as Hitler did in Germany and then in Austria when Hitler's troops moved into Vienna.  Creative thinking among children was seen as a danger by dictatorships − no doubt correctly.  One of the Jewish teachers in the Montessori school of Vienna fled to Benares, India, the headquarters of the Theosophical Society.  Thus, in 1939, Montessori and her son Mario left for India to give an educational training course in Benares organized by the Theosophical Society. In one of those bureaucratic ironies, in September 1939, when England went to war against Germany and Italy, Montessori and her son became “enemy aliens” at first confined to the compound of the Theosophical society.  There were enough protests that the Viceroy changed the policy for the Montessoris to special reservations concerning travel within India and a prohibition on leaving India.  Thus she spent the war years until 1946 in India where her educational ideas influenced a growing number of Indian teachers.

Given the start of the war, Maria Montessori placed renewed emphasis on education as a factor of peace and of the special role that women should play in peace building, true then and still true today. In an article in 1939 “Peace Through Education” in the Visva-Bharati Quarterly edited by Rabindranath Tagore she wrote “ What we have to recognise is that mankind is bewildered by developments of widespred importance with which education has never dealt.  Men do not know what are the forces that draw them into war, and therefore they are absolutely helpless against them.  Society has evolved only on the material side, in this field powerful and complicated mechanisms have been built up, and in these modern man, still ignorant of the mind and incapable of cooperation is helplessly caught.  The child is misunderstood by the adult; parents unconsciously fight against their children instead of aiding them in their divine mission.  Parent and child misunderstand one another, a cloud comes between father and son at the very beginning of life.  And throughout childhood, it ismisunderstanding that makes a child sullen or rebellious, neurotic or stupid, for all these faults are foreign to his true nature.  In our experience with children, we have seen that the child is a 'spiritual embryo' able to evolve by itself and to give us actual proff of the existence of a better type of humanity.”

Rene Wadlow, President, and a representative to the United Nations, Geneva, Association of World Citizen