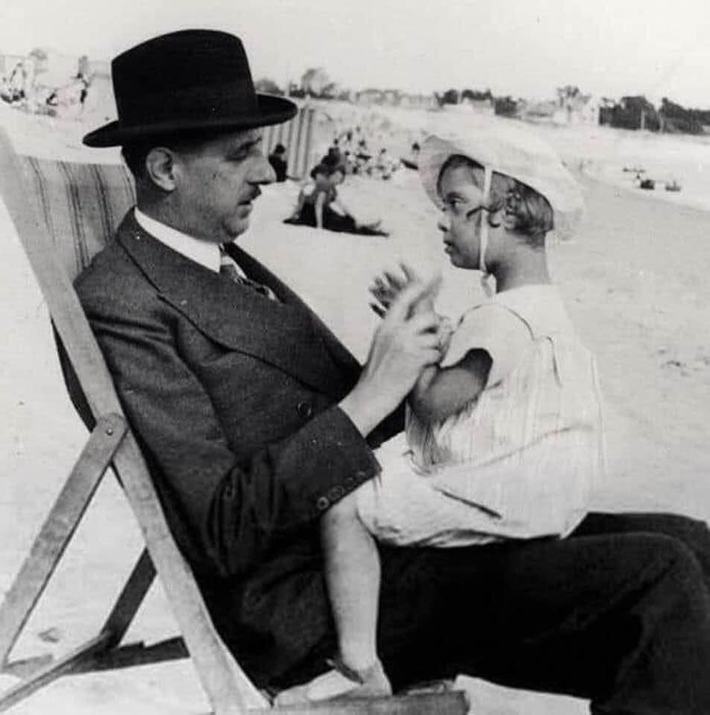 The girl in the photo is Anne de Gaulle; the third daughter of Yvonne Vendroux and General de Gaulle. She was born on New Year's Day in 1928. Her features, as you can appreciate, are characteristic of what we now call Down syndrome, and in Anne's case it was severe, so much so that she could barely walk with difficulty.

At that time having a baby with a disability was something that was hidden, many sent them straight to mental institutes where they lived and died, others kept them hidden at home, without attention, without love, just locked up and sometimes tied up like animals.

But de Gaulle did not see Anne as a disgrace, but they felt blessed with her. The photo we share was taken on a beach in Brittany in 1933. Anne is sitting on her father's lap and he, dressed in a Homburg hat and a three-piece suit, gently holds her hands as the five-year-old girl stares intently at us. his eyes. It's an image of unconditional love.

This unconditional love made her the center of the de Gaulle family. Charles said it was his "joy" and that "she helped him see beyond the faults of men."

Charles and Yvonne created an equitable family environment where the three children felt loved and accepted. They insisted that Anne always travel with them. The general sang songs and read him stories, showing an affection and tenderness that he didn't really show to many members of his family. The main rule of the family was that they should never make Anne feel less or different than anyone else.

The general was devoted to his daughter, and so told the military chaplain who treated De Gaulle, with whom he was able to summon and be a confidant: “For me, Anne has been a great test, but also a blessing. It helped me a lot to overcome all obstacles and all honors. Thanks to Anne I went further, I managed to overcome myself".

For his last biographer, Jonathan Fenby, "Anne symbolized for De Gaulle an unconditional affection, and although obligations seemed to hold him back, her father was always close."
In February 1948, Anne died of pneumonia, surrendered in her father's arms. "Now she's like the others," Charles told his wife.

"Her her soul has been released, but the loss of our girl, our hopeless girl, has brought us immense pain."
Another of former president Jean Lacouture's biographers records him saying once: "Without Anne, perhaps I could never have done what I did. She gave me heart and inspiration." In this sense, the man of June 18 and his beloved petite Anne teach us something we are tempted to forget: that we can all find strength in weakness and that nothing is More powerful than self-giving love.

In 1962, 14 years after Anne's death, Charles de Gaulle was the victim of an assassination attempt. He later stated that the bullet that could have been fatal had been stopped by the frame of Anne's photograph, which he always carried with him.

When he died in 1970, the general was buried in the cemetery beside his beloved daughter. Their mother joined them in 1979.

I read around that the only word Anne could utter clearly in her short life was "father".