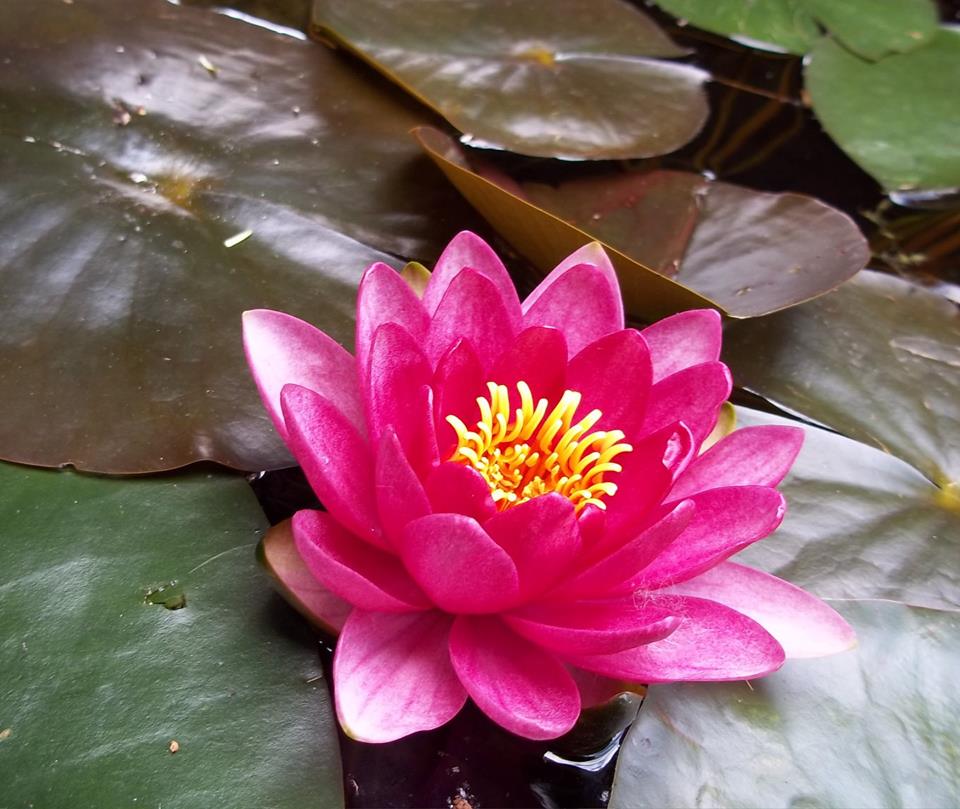 THE LOTUS
"...you can hear a sound like a sigh or 'aah' -- an audible indication of awakening..."

"Buried in the rank, dark muck of stagnant mosquito-infested swamp water, a brown seed the size of a bean lies waiting; it is destined to give birth to an exquisite bloom that has inspired lovers of flowers and seekers of truth for over four thousand years. This seed, pressed into the rich cow dung silt of tropical ponds has been transported throughout time by riverboat, camel and elephant across mountains, deserts and oceans from Egypt, China and Japan. Now the tiny kernel, having popped out of a seedpod like a jewel falling out of a precious brooch, slumbers at the bottom of a pond through winter's dark and awaits the warmth of spring.

The seed's smooth hard side cracks open and, like Prince Siddhartha lifted at birth from the side of Queen Mayadevi by the gods Brahma and Indra, a white sun-starved sprout bursts forth from the creamy interior to begin its steady ascent through the heavy mass of worldly life toward the sun of enlightenment.

The Prince, prophesized to be the next Awakened One, ventures out of his protected palace; the seed pushes through the mud toward the surface of the pond. He does not know the way, exactly, or so it appears to ordinary eyes, but follows his life's path to the higher realm above. He looks up and heads toward the high June sun that beats down on the pond to coax, cajole, encourage. The way is difficult and dark, but the sprout is now a shoot, grows closer to fresh air, to the oxygenated life that is its destiny.

The shoot transforms into a stem, pushes up, pushes forward. Nothing will stop it now as it thickens and becomes capable of supporting a glorious bloom five feet above the surface of the scummy pond. The patience, effort, and single-pointed determination have paid off; the flower stalk can stand alone and upright. The sunlight beckons -- so close now, within inches, fractions. And then a tight furl of something indescribably precious begins to bulge out from the stem.

On a hot day in August, as the sun rises over the eastern mountains, petals as soft as newborn skin unfurl rapidly. At this moment some say you can hear a sound like a sigh or an 'aah' -- an audible indication of awakening -- before a perfectly formed pale pink blossom with a radiant yellow center triumphantly opens wide to the world...This is Nelumbo nucifera, the sacred lotus, the universal symbol of Buddha, the awakened mind emerging from the mud of delusion and cyclic existence."

most topical for me to read this.. as i am about to post a recent poem entitled 'lotus eaters'.....