THE START OF THE BEGINNING! 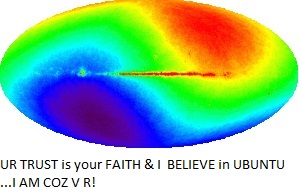 When the one Benign Consciousness tore itself with a “Aaaau” from being nothing in loneliness to form undefined plasma in the first 3 seconds, its tears of pain registering on the consciousness as space time fabric with the cry itself contained in the pulsating expanding plasma toning down to “Uuuum” on cooling to form galactic clouds and in the rest of the expanding forming dynamic universe echoing as a cosmic hum as “Mmmmh” Imagine a new born & first feed...

Before this sound didn't exist, since it needs a medium to propagate or in other words matter which was not yet formed when the first radioactive element deuterium was born which all consummated in the first 3 seconds of the creation leading to 2 deuterium combines to form stable helium, the first element when stars are born...Lithium was formed by 3 deuterium atoms. along with neutrinos too is the first metal in the universe.

{Deuterium is a hydrogen isotope with a neutron ...hydrogen usually has one proton & one electron in its abundant state as the visible universe in stars & is the fusion reactor source for core of each light emitting electromagnetic spectrum which includes visible light & radio-waves which are electromagnetic waves with different frequency like x-ray can penetrate skin.}

Thus, I am nothing but fractals created by neutrinos interacting with galactic sugar molecules forming DNA called GENES since nature abhors vacuum, doesn’t tolerate excess & permits only unique singular expressions like YOU.

An adult head weighs around 10 to 11 pounds (4.5 to 5 kg).. It is this work on the vertical plane against gravity during working hours that is a collector of stress of unfinished tasks & worries of resolved issues that is canned during wakeful state to be de~stressed as dreams in the R.E.M state with only heart & eyeballs mobile the rest paralyzed so as to not able to act the reality of the dream by a sleep state neuro~toxin.

Then during ghost hour 3:15 to 4:45 am Theta state dream less sleep to discharge the battery of the hosts dream source by balancing the CNS fluids through medulla oblongate. & give dreamless sleep to start new day, Is like the time taken for soul's conscious spirit flow through the core of the planet to do a free fall through the core of earth, visit diagonally across globe in 42 ~43 minutes as if only gravity is working & get back in equal time..happens with everyone every night to balance the left & the right neural hemispheres or bring Yin & Yang in poise...or call it ShivaShakti Maya...The wakeful state being Bodily free, dream state Mentally free & dreamless sleep spiritually free

Then about an hour and half before the first rays of sun which destroy gushing ahead of light bending due to gravity impinge at more than 1.5 billion per second per.square centimeter Take bath, pray & meditate to annihilate Body, Mind & Spirit through cleansing, surrender & solitude accentuate the harnessing of neutrinos by the body to get higher energies which exchanges its subtle chakra energies to sustain our daily Auric magnetic field.

The Sahasrara Chakra symbolizes detachment from illusion; an essential element in obtaining higher consciousness of the truth that one is all and all is one. BEING

Ajna translates as “command”, and is considered the eye of intuition and intellect. When something is seen in the mind’s eye, or in a dream, it is being seen by Ajna. AUM. thinking

Vishuddha or Throat chakra is known as the purification center associated with creativity and self-expression. When it is open, negative experiences are transformed into wisdom and learning. Akash. ham. hearing

Anahata is associated with the ability to make decisions outside the realm of karma. In Manipura and below, man is bound by the laws of karma and fate. In Anahata one makes decisions (“follows one’s heart”) based on one’s higher self, not the unfulfilled emotions and desires of lower nature. As such, it is known as the heart chakra. It is also associated with love and compassion, charity to others and psychic healing. Vayu. yam. touching

Manipura is considered the center of dynamism, energy, will power and achievement (Icha shakti), which radiates prana throughout the entire human body. It is associated with the power of fire and digestion, as well as with the sense of sight and the action of movement. Agni. ram. seeing

Muladhara is considered the foundation of the “energy body” which rises to the head to unite the female and masculine energies, or Shakti and Shiva. Muladhara is the base from which the three main psychic channels or nadis emerge: the Ida, Pingala and Sushumna. It is associated with the element of earth, the sense of smell and the action of excretion. Prithvi. lam. smelling

There are no coincidences in life, only conscious, continuous, cognizable incidents which eternally seek balance & new definition called Dharma by resolution of polarities & Karma by subjective objectivity for dissolution of opposites...

Bodily AURA is our past history
Minds-cape DREAMS present-tense
Spirit of SOUL your future
Prith~we(Earth) your space craft oh voyager!