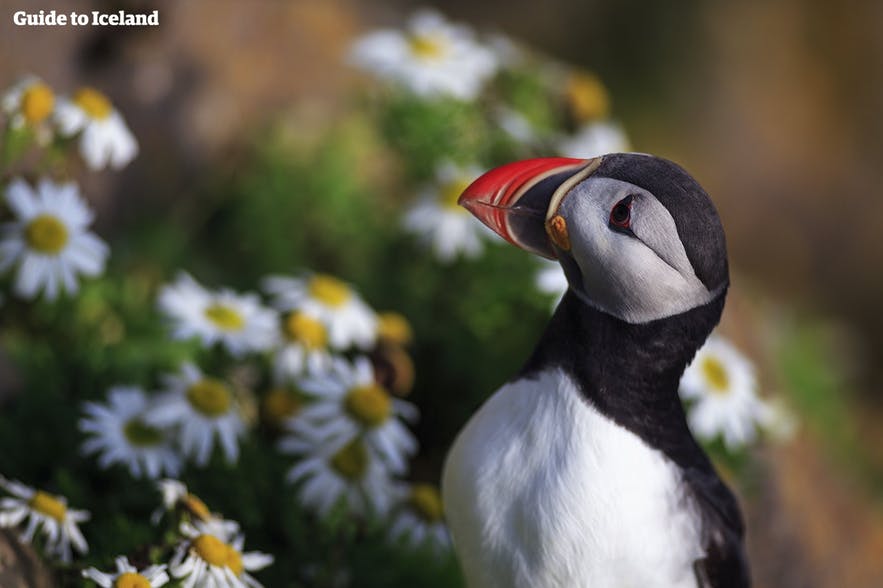 Puffins are considered to be rare and elusive birds in the majority of the world, but in Iceland, there is a wealth of them. Their arrival in April and May mark the beginning of summer, and they can be easily seen up close in many parts of the country until August.

Approximately sixty percent of the world’s population of North Atlantic puffins breed in Iceland’s cliffs; there are millions of nesting pairs. These birds do not like to roost anywhere where there are not others of their species, so wherever you can find one, you are likely to find hundreds more.

Puffins can be appreciated by boat and by land. From Reykjavík’s Old Harbour, it is easy to jump on an hour-long tour to one of two islands, Lundy and Akurey, just out in the bay, where they nest in the thousands. These vessels are small enough to get close to the rocky shores, and many tours include binoculars so you can see them even more clearly. Many whale-watch tours include a detour to these islands. Nesting puffins are almost always found in pairs, which they remain in for life.

Those travelling to the Westfjords in summer need not even board a boat to see puffins. The Látrabjarg cliffs, which are up to 440 metres high and stretch for 14 kilometres, are impressive in their own right, but the wealth of birdlife makes them awe-inspiring.

By walking along the edge of this cliff, it is possible to get within arm’s length of the nesting puffins. They have no fear of people, and will only fly off if someone is trying to touch them. At such proximity, the details of their painted beaks and adorable expression are on clear display.

These are not the only places puffins nest, however. They can be found in huge populations around the Westman Islands, on the Dýholaey rock arch, in the East Fjords, and on Grímsey Island in the North.

As is well-documented, Icelanders have a quite a penchant for unusual meats. It is, therefore, the only country in the world where you can spend the day watching puffins, then enjoy one for dinner.

Beautiful text about these beautiful birds.
I have never seen one. I am far from the sea.