The March on Washington for Jobs and Freedom or "The Great March on Washington," as styled in a sound recording released after the event, was one of the largest political rallies for human rights in United States history and called for civil and economic rights for African Americans.

It took place in Washington, D.C. on Wednesday, August 28, 1963—50 years ago today. Martin Luther King, Jr., standing in front of the Lincoln Memorial, delivered his historic "I Have a Dream" speech advocating racial harmony during the march.

The march was organized by a group of civil rights, labor, and religious organizations, under the theme "jobs, and freedom." Estimates of the number of participants varied from 200,000 to 300,000. Observers estimated that 75–80 percent of the marchers were black.

Gospel legend Mahalia Jackson sang "How I Got Over," and Marian Anderson sang "He's Got the Whole World in His Hands." This was not Marian Anderson's first appearance at the Lincoln Memorial. In 1939, the Daughters of the American Revolution refused permission for Anderson to sing to an integrated audience in Constitution Hall.

With the aid of First Lady Eleanor Roosevelt and her husband Franklin D. Roosevelt, Anderson performed a critically acclaimed open-air concert on Easter Sunday, 1939, on the steps of the Lincoln Memorial.

Joan Baez led the crowds in several verses of "We Shall Overcome" and "Oh Freedom." Bob Dylan performed "When the Ship Comes In," for which he was joined by Baez. Dylan also performed "Only a Pawn in Their Game," a provocative and not completely popular choice because it asserted that Byron de la Beckwith, as a poor white man, was not personally or primarily to blame for the murder of Medgar Evers.
Peter, Paul and Mary sang "If I Had a Hammer" and Dylan's "Blowin' in the Wind." Odetta sang "I'm On My Way."

Some participants, including Dick Gregory criticized the choice of mostly white performers and the lack of group participation in the singing. Dylan himself said he felt uncomfortable as a white man serving as a public image for the civil rights movement. After the March on Washington, he performed at few other immediately politicized events.

The symbolism of the March was contested since before it even took place. In the years following the March, movement radicals increasingly subscribed to Malcolm X's narrative of the March as a co-optation by the white establishment. Liberals and conservatives tended to embrace the March, but focused mostly on King's "I Have a Dream" speech and the legislative successes of 1964 and 1965.

The mass media identified King's speech as a highlight of the event and focused on this oration to the exclusion of other aspects. For several decades, King took center stage in narratives about the March. More recently, historians and commentators have acknowledged the role played by Bayard Rustin in organizing the event. 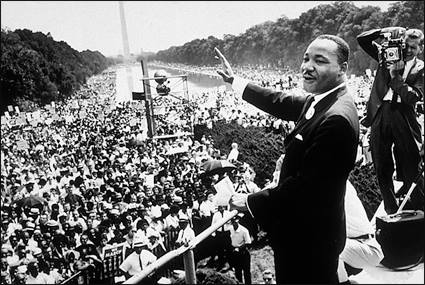 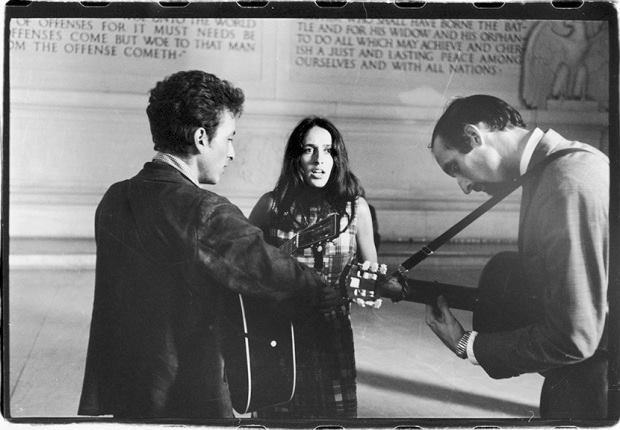 Bob Dylan, Joan Baez and Paul Stookey play together in the Lincoln Memorial on August 28, 1963.