Despite a veiled threat from Concert Promoter Tony Toledo, whale and dolphin defenders exercised their passion and their courage last night on Phoenix, Arizona.

Tony Toledo had posted a warning to protestors saying that Arizona was “an open carry state.” He was implying that his people and citizens could be armed.

It did not deter the Phoenix activists.

Patricia Garcia Cady had a face to face with Heri Joensen. The same Heri who refused to come out of his bus to speak with me the night before in San Diego.

Thank you to everyone who attended in protest to Tyr playing in Phoenix, Arizona! You ALL rock! Thank you for being so passionate and standing up for all beings!

At the start of the protest, I looked to my left and saw Heri walking toward us. I stated his name loudly in an effort to speak with him. He obliged. I thought he was coming to speak with us, but he said he was going to go get "food" (at Subway). I truly believe that he did not expect anyone to recognize him. I questioned him about mercury levels in the pilot whale "meat" consumed by human beings of all ages. He said it is unproven scientifically and that the health official in the Faroe's who says it is toxic, is simply seeking attention. It became painfully obvious that anyone who wants the Grind to stop, Heri believes is merely "seeking attention".

Heri was courteous and polite to me, until he wasn't. We had a few tense moments in conversation. An old fashioned southwest "stand off" took place during the few lulls in our conversation. We simply stared at each other. It was odd. The lulls occurred after he went on several offensive short rants about Captain Paul Watson of Sea Shepherd. He told me that I have been fooled by Paul because I said that Paul was passionate in his concerns. He wanted to know if Paul gave me my Sea Shepherd shirt or if I bought it. Neither are the case and when I told him that, he was taken off guard. Mine was a gift from a few years ago for being a Sea Shepherd monthly donor. He asked me about the shirt because, for some reason, it bothered him that any Sea Shepherd volunteer or crew member had ever purchased a Sea Shepherd shirt on a Faroe Island campaign. Maybe he thought Paul just "gave me" a shirt for the protest? But that is just not the case.

After his rant, he abruptly left the conversation when the more difficult questions were being asked. While he was walking away, he stated loudly, "I have never killed any pilot whales!" When he returned, he walked by us, looked at a protest sign, then looked straight ahead while shaking his head, and stated once again, "I have never killed any pilot whales!" Yeah, you said that already. But you do butcher pilot whales and you do eat them, Heri. I find no difference. Your song lyrics hail the killing of pilot whales. You still represent Tyr when you post pictures of yourself butchering pilot whales. I'm not sure why you are confused as to why anyone is protesting your band?

Later during the protest, I saw Gunnar walk by us. The conversation began with him. Gunnar was polite and respectful, much more pleasant than his band mate, Heri. We were shocked to learn that Tyr drummer is "vegan", but doesn't have a problem with the Grind. Perplexing. One of the remarkable protesters was debating Gunnar regarding adopting vegansim. It was a super conversation! Knowing that Sea Shepherd are vegan as is every protester in attendance, it was a perfect addition to our other many questions. We conversed with Gunnar for nearly an hour.

Protesters had conversations with several folks who were completely onboard with our message: Stop killing pilot whales and dolphins in the Faroe Islands! They spoke at length with these genuinely concerned human beings.

When the Arizona concert promoter stated that no one in the metal scene would ever protest Tyr, he was met with metal protester backlash. About 10 awesome vegan "metal heads" showed up and even stayed to protest longer than anyone else! Yup, Metal AF!

One concert attendee stated she was going to the show, but would leave as soon as Tyr began to play -- it was already her plan. She said that she is disgusted by how vocal Heri is about killing whales and she will not show Tyr support. No one had to educate her on the issue. She was already following Sea Shepherd on Facebook, on television and in the news. We didn't deter her from watching Tyr perform. We didn't have to.

I do wish we could have spoken with more people, but, there just weren't that many people to speak with last night. Maybe the promoter didn't "promote" well enough. Maybe people have no idea who Tyr are? Maybe they just don't like anyone bragging about the killing of pilot whales, or butchering them, or eating them, or singing about killing them.

In Arizona, and yes, we are all living in Arizona, we protest all kinds of cruelty toward animals and humans. We protest regardless of where you are from and what "traditions" you hold. Be you from down the road or across the world -- cultural relativism to justify such cruelty is not a justification. Not a logical one. 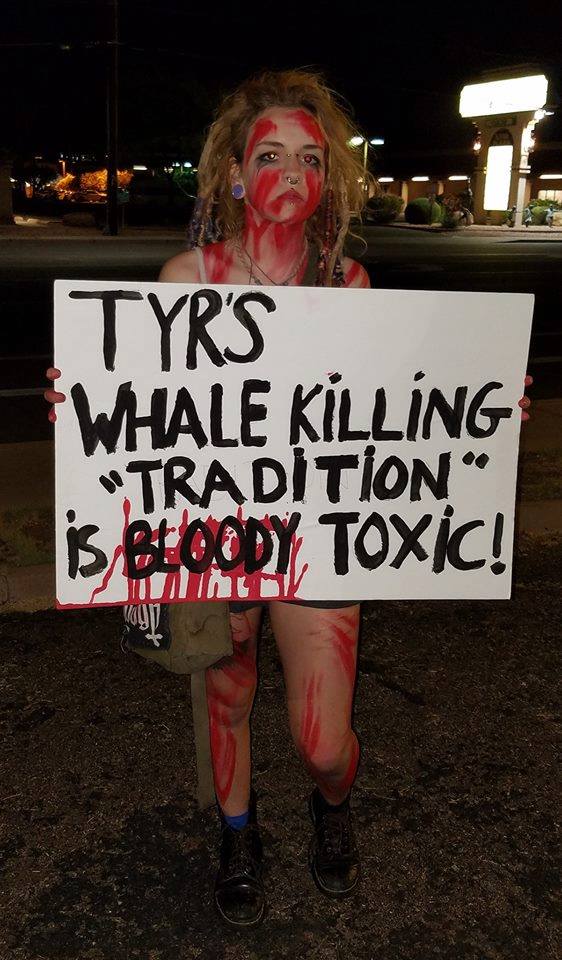 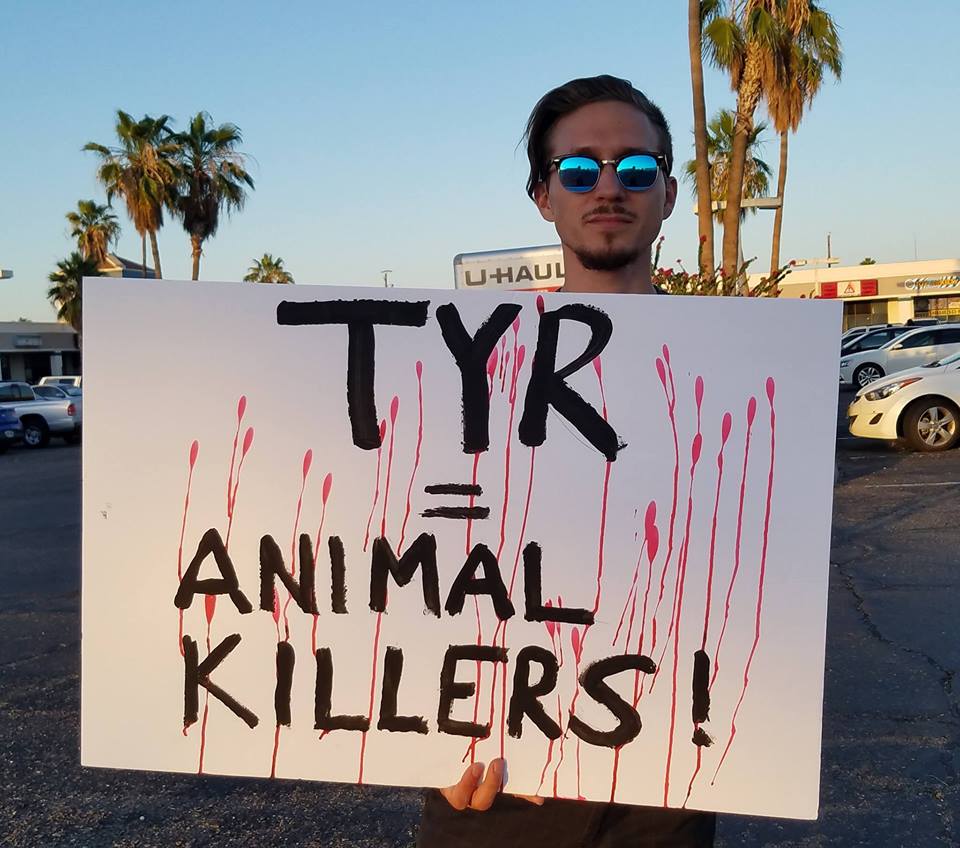 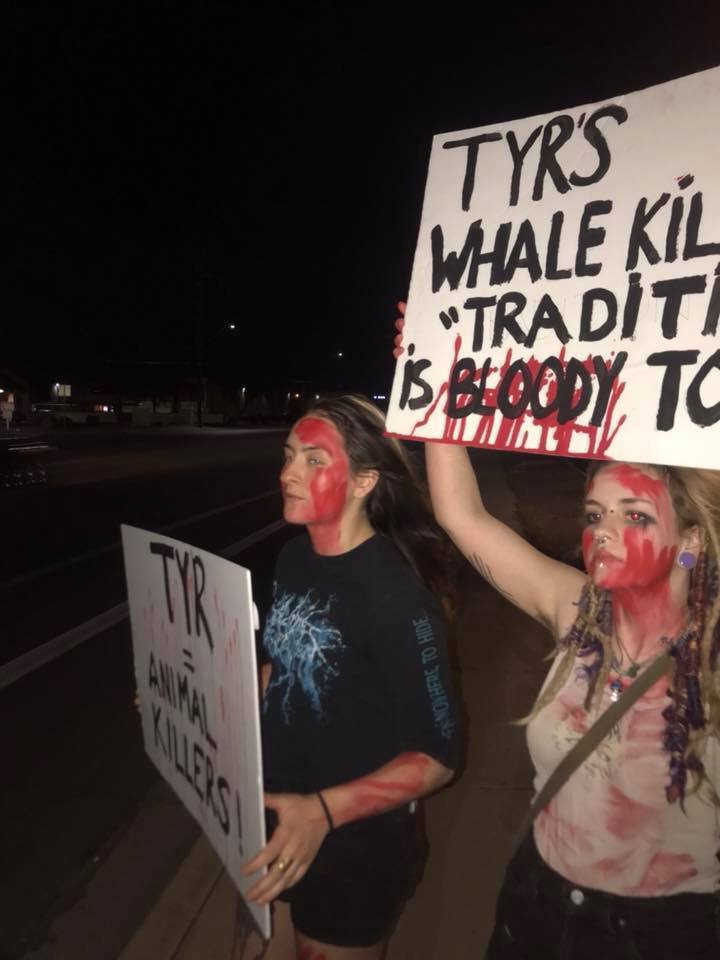 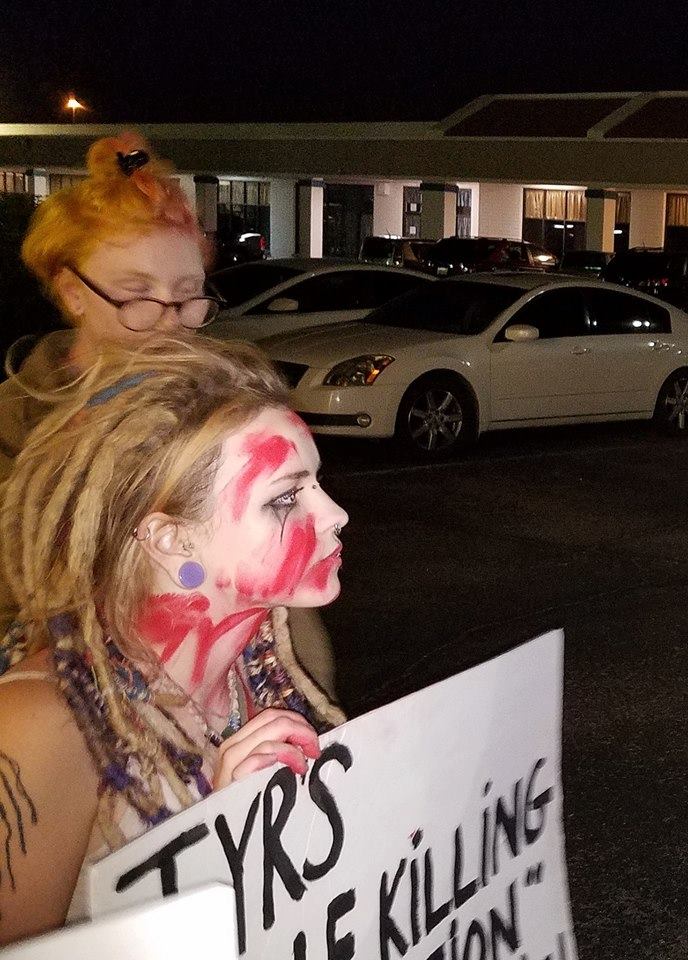 We are plundering our planet for convenience and greed. Plastic mountains in our oceans, environmental warming, melting glaciers, tsunamis, careless handling of radioactive waste, just keep it up, mercilessly ...