The trees smile with their sprout
of tender leaves and blooming flowers,
Eternal nature with its transient expressions
Hails spring with ecstasy and joy!
Bewildering shades with so many tinge.
The land of beauty and greatness,
India, witnessing color of happiness and peace
Nation come alive to enjoy the spirit
A celebration of color- Holi!
An experience of content, harmony and delight


Holika burns amidst merriment and mirth.
Evil overpowered by love and devotion.
A festival to commemorate 'Ras Lila'-
an enduring love saga of Radha and Krishna.

Gulal - red, green, yellow and countless
A day's canvas - a riot of colors
Lively crowd running hither and thither,
Rainbow of colors, dashing from every nook and corner
Disregarding their woe and despair fervent folks,
rejoicing at the marvel of colors.
A day filled with luster and gaiety,
A day to smear our dreams-
With a splash of vibrant frenzy colors
Holi Hai! A spring of unbounded fun and frolic!!

Holi falls in the lunar month of Phalguna according to the Hindu calendar. This date corresponds in the months of February or March as per the Gregorian calendar. It is marked on the last full moon day (Phalgun Purnima). The festival of Holi is a celebration of unity and brotherhood wherein festivities are observed with high spirits irrespective of caste, creed, color, race, status or sex. The main day of the festival is known as Holi, also referred to as Dhuli Vandana in Sanskrit, or Dhulheti, Dhulandi or Dhulendi. This is observed by throwing and smearing colored powder on one another. The day before Holi is known as Holika Dahan, or Chhoti Holi, which means ‘burning of Holika’. This takes places on the night before Holi.

This is marked by lighting bonfires signifying the destruction of the demoness Holika. The demon-king Hiranyakashipu asked his sister Holika to carry his young son Prahlad in a blazing fire to end Prahlad’s devotion towards Lord Vishnu. Holika had a boon to escape unburnt even from fire. However, this boon ended as soon as Holika entered the fire and burnt into ashes while Prahlad came out unharmed. Hence, people light bonfires to mark the victory of goodness over evil on Holika Dahan. The next day brings in a lot of fun play with colors. Red, green, blue, yellow, black, and silver, all mix up in the festivity of unity highlighting the essence of the occasion. 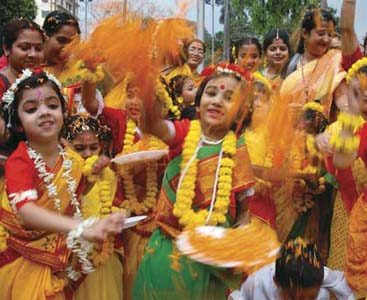 Holi is the festival of colors and sweets. It brings along with itself the colors of joy, brotherhood, enjoyment and optimism. As it is one of the most ancient festivals in the country, there are thousands of legends associated with this festival. However, the most interesting of them is the Krishna- Radha’s love story. Another legend associated with Prahlada and Hirankashyapa reminds one of the victories of ‘Good over Evil’. On a whole, Holi reminds us of the fact that love and truth are two divine forces in the Universe. Several poets have expressed the naughtiness, the spirit and the gusto and the divine message of Holi in their poems.

HAPPY HOLI TO ALL PEACE FOR THE SOUL MEMBERS ....

Thank you, my dear Eva, for your good wishes and wish you and the others a blessed Holi.

Is it Holi already?...the year is passing so fast... thank you Eva for reminding us.

To all my Indian friends - Happy Blessed Holi. May it be the opening to  better days all over the world.

Happy holi to everyone !