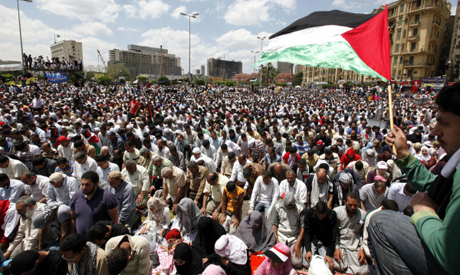 A boy holds a Palestinian flag during Friday prayers at Tahrir Square in Cairo May 13, 2011.
REUTERS/Mohamed Abd El-Ghany

As hundreds of activists prepare to send a convoy to demonstrate at Egypt's border crossing with Gaza in Rafah, Egyptian authorities are on high alert.

According to AFP, Egyptian authorities on Friday blocked access to the Sinai peninsula, where it stepped up security to prevent the planned march from Cairo to Gaza.

The march is planned to leave from Cairo’s Tahrir Square on Saturday to reach Rafah on Sunday. It is calling for the right of all Palestinian refugees to return to their land and demanding that Egyptian authorities release all Palestinian prisoners in Egypt.

The march is planned to reach the Gaza borders on Nakba Day (15 May), the day in which Palestinians were forcibly evicted from their land and homes to establish the state of Israel.

AFP's correspondent reports that the “Peace Bridge”, one of the main access routes to Sinai from mainland Egypt, has been closed to all except residents of the peninsula. However, 15 Egyptian activists trying to reach Rafah from Cairo say they managed to cross the bridge but were stopped right after in Kherba, halfway between the “Peace Bridge” and Rafah. As of yet, they do not know if they will be allowed to pass.

The army has also stepped up security around the peninsula, a security official told AFP.

Demonstrations in solidarity with Palestine and in preparation to the Palestinian 15 May Nakba Day have been staged in several Egyptian cities including Cairo, Suez and Arish.

Thousands have joined early morning prayers in several mosques in Cairo carrying Palestinian flags from where they marched to Tahrir Square, the heart of Egypt’s revolution.

My heart and my eyes are always crying when I see the atrocities Human Beings can do.

Pro-Palestinian convoy to Gaza defies Egypt's security pressures to cancel march, rearranging transport when their chartered bus company was ordered to back out and despite probabilities of a clash in the peninsulaAhram Online, Saturday 14 May 2011

The tourism company that was supposed to provide anti-Israel demonstrators with busses ‎‎heading to Rafah crossing from Cairo has backed out of its deal pursuant to orders ‎‎from Egyptian authorities, but the march to Gaza will take place as planned after the ‎organisers secured other busses. ‎
‎ ‎
Halim Heniesh, member of the Coordination Committee for Supporting the Palestinian ‎‎Cause, says he was informed of the trip’s cancellation late last night and did not have ‎‎enough time to book another trip, implying that the march would be called off. ‎
‎ ‎
However, the committee managed to find other means of transportation at ‎very short notice. ‎

It’s understood that 18 busses should transport around 900 protesters to the Rafah border crossing.‎

Egyptian authorities have blocked access to the Sinai Peninsula to prevent a march from ‎‎Cairo to Gaza, an AFP correspondent in Sinai said yesterday.‎

The march was due to leave from Cairo's Tahrir Square to protest the Israeli occupation of ‎‎Palestinian land and call for the right of return of Palestinian refugees and the release of all ‎‎Palestinian prisoners.‎

‎"Peace Bridge," one of the main access routes to Sinai from mainland Egypt, has been ‎‎closed to all but residents of the peninsula.‎

The army also stepped up security around the peninsula, according to a security official.

Egyptian troops fired in the air Friday to disperse a protest outside the Israeli embassy demanding the expulsion of the ambassador and the severance of ties with the Jewish state, an AFP reporter said. 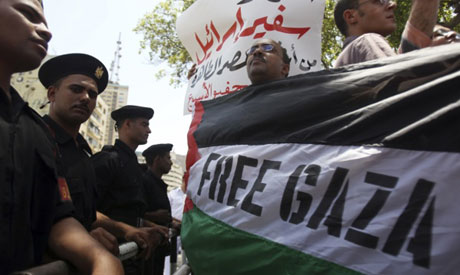 
Protesters fled the scene on hearing the shots but quickly regrouped chanting "We are going in."

Minutes later, protesters began chanting "Silmiya, Silimya" (Peaceful, peaceful) as several of them sat down on a nearby bridge blocking traffic.

The protest -- which would have been banned under the regime of ousted president Hosni Mubarak -- was timed to coincide with establishment of Israel 63 years ago, commonly referred to in Arabic as the "Nakba" or "catastrophe."

The Israeli embassy, on the top floor of a residential building overlooking the Nile, was protected by army and police officers who barricaded the narrow street leading to the entrance.

But protesters had massed on surrounding streets and the nearby bridge.

Pointing to the flag raised above the embassy, they chanted "Bring it down, Burn it!".

At one point, army and police officers were showered with flyers thrown from the bridge which read: "Stemming from our belief in the Palestinian cause, and the desire to free the Palestinian people, a segment of Egyptian youth has decided to take responsibilty for reviving this cause."

Protesters also called for the end of gas deals with Israel, the release of all Palestinian detainees and an end to the Gaza blockade.

Meanwhile, Egyptian authorities had blocked access to the Sinai peninsula to prevent a march from Cairo to Gaza, an AFP correspondent in Sinai said.

The march was due to leave from Cairo's Tahrir Square on Saturday to protest the Israeli occupation of Palestinian land, and call for the right of return of Palestinian refugees and the release of all Palestinian prisoners.

"Peace Bridge", one of the main access routes to Sinai from mainland Egypt, has been closed to all but residents of the peninsula.

The army also stepped up security around the peninsula, a security official said.

I recognize the Egyptians's  to demonstrate in solidarity with the Palestinians, just hope it will be a non-violence demonstration.

Any violence will be a good reason for the authorities to stop it on the spot.

A non-violence, on the other hand, could  be a successful one.

Can justice ever walk this earth?

Can we right all the wrongs

or restore even one life?

or the human dignity?

That has been taken away

when this act of gross cruelty

stalked our blessed lands and homes.