Prayers for peace blowing in the wind

'Be the change you want to see' 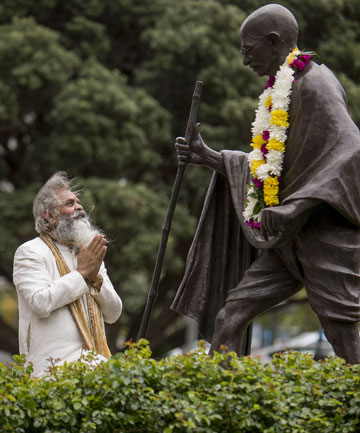 Gusty blasts of wind that blew over a speakers' podium did nothing to stop a spirit of peace descending at Wellington Railway Station for Mahatma Gandhi's 145th birthday party.

Dozens of wellwishers gathered for prayer, song and speeches yesterday at Gandhi's statue, which was festooned with garlands of flowers and had gift offerings laid at the peace leader's feet.

Mohandas Gandhi, most commonly known by his title Mahatma, was born in 1869 and went on to lead a non-violent movement for Indian independence.

A birthday celebration had been held at his statue each year since it was installed in 2007.

"When we have peace within us, the city can grow. If you have any issues, resolve them by sitting down and talking."

He advised Wellington City Council to follow Gandhi's teaching too. "You can look up to him now for your housing, your tracks, your roads," he told mayor Celia Wade-Brown.

Gandhi's non-violent protests against British rule in India helped bring about the country's independence in 1947. He was assassinated by an extremist Hindu nationalist the following year.

Hindu monk Swami Madhuram Puri, originally from Slovakia, but now living on an ashram in Raumati, was supposed to play Gandhi's favourite song on his flute at yesterday's ceremony, but strong winds put paid to that plan.

Gandhi was a daily inspiration, Puri said. "He said, 'Be the change you want to see', and he was the perfect embodiment of that.

"He was not just teaching, but he was living it. I think there is a lot of need for this in the world - peace, and not just speaking about it."