The Power of the Tetragrammaton 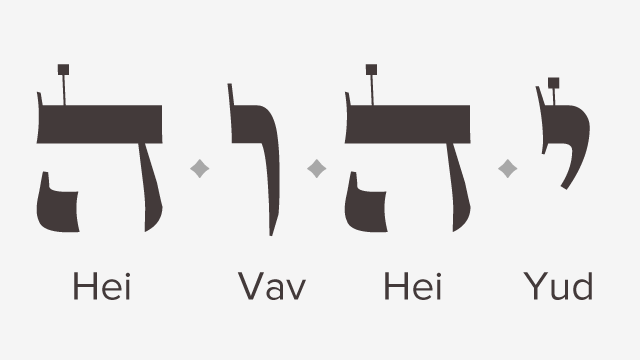 In Ten Luminous Emanations, Rav Ashlag teaches that there is a spiritual process through which all true Desire is created. The process consists of four phases: Chochmah, Binah, Zeir Anpin, and Malchut. He further explains that these four phases are represented in the four-letter name of God, Yud Hei Vav Hei, known as the Tetragrammaton. Yud Hei Vav Hei represents the totality of everything. There is not anything in the world that is not affected by it. Even the most physical objects and the most spiritual of Lights must go through the process of the Yud Hei Vav Hei. It is through this process that a true Desire to Receive the Light of the Creator (also known as a true Vessel) is created, and it is the singular process through which Light is revealed in the world.

There is a story about a great kabbalist who could perform miracles. One of the people close to him wanted to find out how. What was his secret? How was he able to create such wonderful miracles? The kabbalist told him he would reveal his secret and took him to a small room in the back of his house. There he had a beautiful box made of gold and wood. Within the box was parchment with the Yud Hei Vav Hei written on it. He told the man, “This is my secret. Through the Yud Hei Vav Hei, all the miracles I perform are possible.”

The upper piece of the letter Yud represents the Light of the Endless World - the entire potential of the world to achieve lasting fulfillment for all humanity. That is just the top tip of the Yud. The rest of the letter represents the first real phase, Chochmah. In the first phase, the Light of the Creator says, “I want to share everything with my creations.” The Vessel is not yet a true Vessel, though, so it does not yet have a strong Desire for the Light, but is willing to accept the Light, because the Creator wants to share it. If you were to go to a friend’s house who just made a meal that you’d never had before, you probably would not have a strong desire for it yet. But because you know how much work your friend put into cooking the meal, and how excited they are for you to try it, you accept it. This is the phase of Chochmah.

The next letter, the first Hei, represents the second phase, Binah. Now that the Vessel has experienced the Light, it realizes just how amazing it is. Once you taste your friend’s meal, you see how delicious it is, and your desire for it begins to awaken. Because the Light is synonymous with the Desire to Share, this is where the Vessel starts to awaken its Desire to Share and be like the Creator. The Vessel starts to feel its own essence, which is the Light of the Creator, and wants to share.

The third letter, Vav, represents Zeir Anpin. The thinness of the letter Vav symbolizes that it is not yet a complete Vessel, but the letter is long, representing that at the end of the phase there is going to be a Vessel. Now that the Vessel has said it wants to share, the Creator agrees to give it the ability to share. However, the more that we (the Vessel) participate in the revelation of the Light through sharing, the more diminished the Light becomes, because it is not coming directly from the Creator. The Light that we reveal can never be as pure and unfiltered as the direct Light of the Creator. When we involve our ego in the process, by being the ones that want to reveal the Light instead of the Creator, the Light is automatically veiled. The more there is of us in any action, there is less Light. The more we are involved in the revelation, the less Light can be revealed. Whatever degree our ego is involved in our actions, to that degree, the Light of the Creator will be missing. To the degree we remove our ego, to that degree the Light of the Creator will truly be there. This is why we often speak of the need to diminish our ego. Zeir Anpin represents the diminishment of Light that comes from the involvement of our ego. The full totality of the Light is veiled from us so we are unable to experience it, just like after we go home, we no longer can experience our friend’s cooking. We are removed from it to some degree.

The final letter is the second Hei, which represents Malchut, the fourth phase. Binah and Malchut are both represented by the same letter, Hei. In the world of correction, Binah and Malchut are unified as one. Therefore, both of their vessels are represented by the same letter. Malchut is the completion of the Vessel. The Vessel has experienced the totality of the Light in Chochmah, but it was veiled in Zeir Anpin, so the Vessel now feels a sense of lack. Rav Ashlag says you cannot truly have a Desire for something unless you have had it and lost it. Now that you know how good your friend’s meal is and have gone without it, you are hungry for it and can’t wait to have it again. This is the point where the Vessel now says, “I truly Desire the Light of the Creator.”

Only here in Malchut is the Desire to Receive for the Self Alone complete. A true Vessel was not in existence until the last Hei. This is a true Desire and the point where the totality of the Light of the Creator can be revealed in its Vessel.