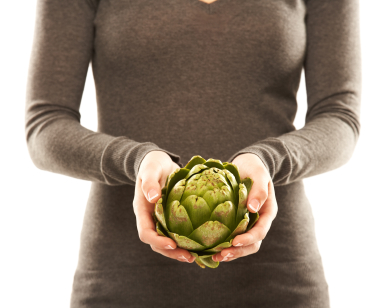 1. Artichokes
Studies have shown that artichokes contain a very high amount of antioxidants in the form of phytonutrients. A study undertaken by the USDA ranked artichokes as the number one fresh vegetable in antioxidant count. Among the most powerful phytonutrients are Cynarin and Silymarin, which have strong positive effects on the liver–any coincidence that artichokes have been reputed to help in the cure of liver diseases, liver cancer and to cure hangovers?

One large artichoke contains only 25 calories, no fat, 170 milligrams of potassium, and is a good source of vitamin C, folate, magnesium, and has 6 grams of dietary fiber–25 percent of the daily recommended amount.

Artichokes originated in the scorching Nile Valley and today are grown most prolifically in the sun-baked soil of Castroville, California. So perhaps it’s not surprising that the artichoke, which is actually the immature flower of the thistle plant, may provide protection against skin cancer.

Artichokes are also excellent for your heart, are an excellent source of fiber, magnesium, folic acid, and a burst of vitamin C!

How do you prepare artichokes in the kitchen? If you follow a few easy tips, preparing and eating artichokes is simple, as shown in these six steps

1. Dirt readily gets lodged beneath their scaly leaves, so it’s important to rinse artichokes thoroughly before cooking them.
2. Pull off the tough outer, lower petals. With a sharp knife, slice off the stems so that they’re level with the bottoms of the artichokes.
3. Stand the artichokes in a large saucepan. Cover them halfway with water and simmer, covered, for 30 to 40 minutes. Or place them on a steaming rack and steam for the same amount of time.
4. To test for doneness, pull on a center petal. If it comes out easily, the artichoke is done.
5. To eat the leaves, hold them by the tip, curved side down, and draw them between your teeth to remove the tender flesh.
6. When the leaves are gone, use a fork or spoon to scoop out the hairy layer, called the choke. Discard the hairy choke, then dig into the best part–the tender heart. 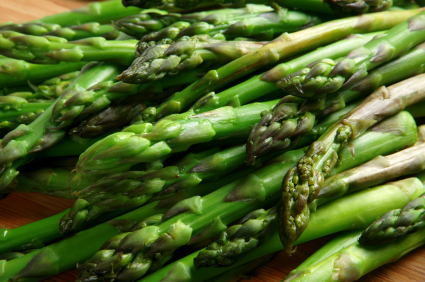 2. Asparagus
According to the National Cancer Institute, asparagus is the food highest in glutathione, an important anti-carcinogen. It is also rich in two cancer-blocking vitamins (A and C) as well as the mineral selenium. These three nutrients have been singled out in several studies as fearsome cancer fighters. A 5 ounce serving (only 20 calories!) provides 60 percent of the recommended daily allowance for folacin which is necessary for blood cell formation, growth, and prevention of liver disease. Asparagus is also an excellent source of potassium, fiber, thiamin, vitamin B6, and is one of the richest sources of rutin, a compound which strengthens capillary walls. 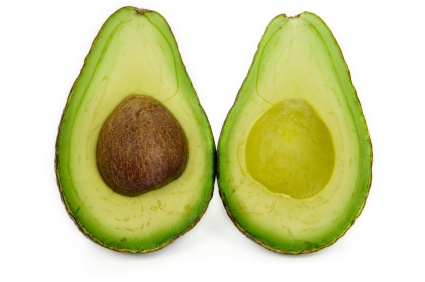 3. Avocado
They’re rich, they’re buttery, they’re delicious, and they have about 30 grams of fat per fruit. Ouch. But that’s no reason not to love an avocado. Nutritionists have back-pedaled on their gentle warnings about avocados after finding that most of the fat in an avocado is monounsaturated–the happy fat that actually lowers cholesterol levels. Yay! Let’s have an avocado party!

A study published in the Archives of Medical Research found that the 45 volunteers who ate avocados every day for a week experienced an average 17 percent drop in total blood cholesterol. (Maybe because they were so happy to be eating so many avocados?!) As well, their levels of LDL (”bad fat”) and triglycerides, both associated with heart disease, went down. Their HDL (”good fat”) levels, which tend to lower the risk of heart disease, increased.

Avocados are rich in beta-sitosterol, a natural substance shown to significantly lower blood cholesterol levels. In a review article published in the December 1999 issue of the American Journal of Medicine, researchers pointed out that beta-sitosterol was shown to reduce cholesterol in 16 human studies. 4. Blueberries
Blueberries were one of the early belles of the Superfood Ball. Jam-packed with antioxidants and phytoflavinoids, blueberries are also high in potassium and vitamin C. Recent research has found that additional components of blueberries may play an important role in preventing and fighting cancer. The results of one study suggest a wide array of potential cancer fighting benefits related to wild blueberry consumption. Blueberries also have anthocyanin pigments, which may have the ability to halt cancer in the critical stages of promotion and proliferation. A 2005 study published in the Journal of Biochemistry and Cell Biology indicated that, in isolated cells, the tannins found in blueberries are very active at lowering a protein that plays a role in the metastasis of cancer.

And that’s not all! In addition to helping prevent and fight cancer, the compounds in blueberries are believed to help against Alzheimer’s disease, heart disease, eye disease and urinary tract infections. See? Super. 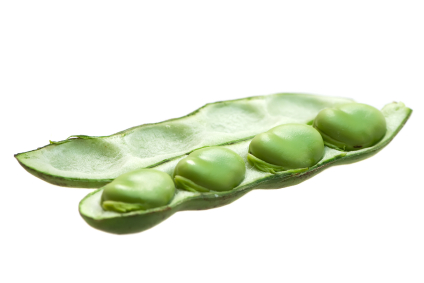 5. Fava Beans (AKA Broad Beans)
Mmmm. Spring in a pod–I adore fava beans, even if they are a little work. Okay, a lot of work, but so worth it! Not only are the big, fat, creamy beans scrumptious, but fava beans are particularly high in fiber (85 percent of the RDV), and also high in iron (30 percent of a day’s requirement). They contain no cholesterol and are low in fat. Fava beans are also noted to contain L-dopa, which is used as a drug for the treatment of Parkinson’s disease. Additionally, as with most whole grains, consumption of fava beans can help reduce risks associated with heart disease. 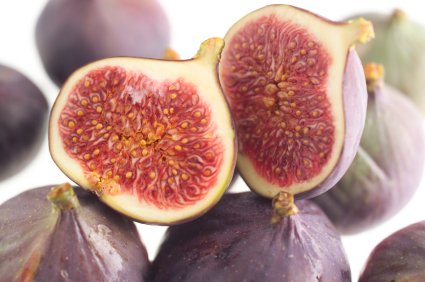 6. Fresh Figs
You can get dried figs year-round, which is why they might show up on my winter superfoods list, but for now (mid-May for California figs), helloooo fresh figs.Fresh figs put the va va voom in fruit–the tender but toothsome skin gives way to a soft and sticky center, dotted with delicately popping seeds, the perfumed and honeyed flesh–you get the picture. In my humble opinion, figs are quite an experience. And beyond their drop-dead flavor is their profusion of life-boosting qualities.

Figs have the highest overall mineral content of all common fruits. With their standout source of potassium, figs may help to control blood pressure. Figs are high in calcium; bones, take notice. And as fate would have it, their potassium may reduce the amount of calcium lost as a result of high-salt diets. Figs are also a good source of iron, vitamin B6 and the trace mineral manganese.

The fruit also has tremendous amounts of fiber, more than any other dried or fresh fruit. Insoluble fiber protects against colon and breast cancer–soluble fiber helps lower blood cholesterol, and figs provide both. (Which also makes them a mild laxative, just so you know.) They also are a good source of flavonoids and polyphenols. 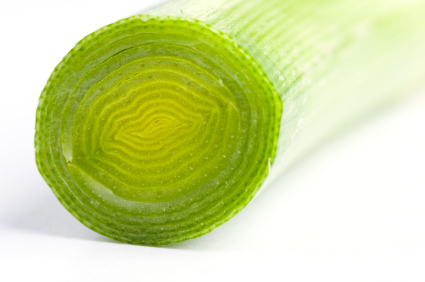 7. Leeks
Leeks look like cartoonishly big green onions, with a wonderfully sweet and subtle onion flavor. When braised or slowly sauteed, they melt into a sweet and creamy concoction that is hard not to love. And they are workhorses in the health department as well. Like garlic, onions, scallions, chives and shallots–all from the Allium family–leeks can help the liver eliminate toxins and carcinogens. Leeks contain sulfur compounds that may protect against heart disease and some cancers, they can help the liver eliminate toxins and carcinogens. Regular consumption of Allium vegetables (as little as two or more times a week–although I could certainly eat them every meal) is associated with a reduced risk of prostate and colon cancer. 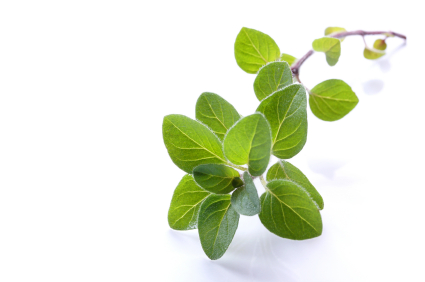 8. Oregeno and Other Fresh Herbs
Give me fresh oregano and find me happy. I love fresh oregano, especially if salty Mediterranean flavors–capers, olives, roasted peppers–are involved. Yum. And yum. And superfood-y too! When researchers at the University of Oslo, Norway analyzed 1,113 foods to identify those foods richest in total antioxidants. Of the 50 foods highest in antioxidants, 13 were herbs and spices. One study found that oregano had 42 times more antioxidants than apples.

Is it surprising that fresh herbs are so healthful? Not to me, on an instinctual level they strike me as deeply salubrious. Randomly pick an herb and research its health benefits. You might find that parsley is an excellent source of beta carotene, the carotenoids lutein and zeaxanthin–essential for preventing macular degeneration–vitamin A, vitamin C and vitamin K. Or try cilantro. In research studies, cilantroï¿½s remarkable components have shown the potential to help promote detoxification, reduce high blood sugar and lower levels of cholesterol. 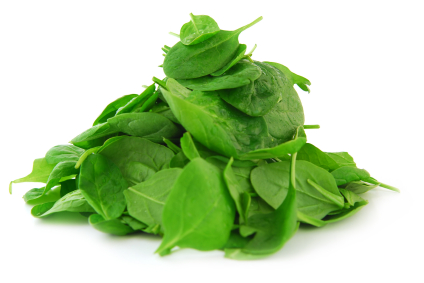 9. Spinach
Spinach, good old spinach. It’s almost surprising that something so good for us is loved by so many! Spinach is an excellent source of folate–the B vitamin that helps to prevent birth defects, heart disease, dementia, and colon cancer (the third most common cause of cancer in women)–people who eat at least one serving of greens, including spinach, each week are 20 percent less likely to develop colon cancer, according to Italian research. Another compound in spinach, lutein, fights against macular degeneration, which causes age-related vision loss–in fact, including at least two servings of spinach a week in your diet halves the odds of macular degeneration (a leading cause of blindness), according to the the National Eye Institute. Eating cooked spinach more than twice a week cuts the need for cataract eye surgery in men by half, according to new Harvard University research. And in a large-scale Harvard study, spinach singled out as most protective against stroke! Finally, because of it’s high in vitamin K, spinach also helps build stronger bones–lowering the risk of hip fracture from osteoporosis as much as 30 percent, suggests a joint Harvard-Tufts study. Popeye was on to something. 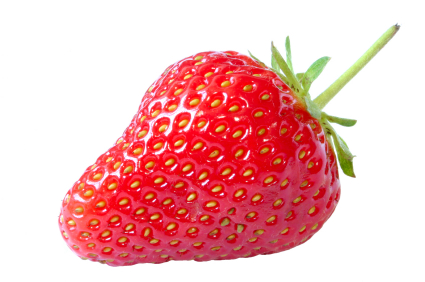 10. Strawberries
A of eight medium strawberries provides 140 percent of the daily recommended allowance of vitamin C, 12 percent of our RDA for fiber, 6 percent of our RDA for folate, 210 mg of potassium, and is also high in vitamins K, B2, B5 and B6, copper, magnesium, and omega-fatty acids. In addition, strawberries contain anthocyanin, which has been used for studies in preventing initiation of cancers. Strawberries contain a unique phenolic group, ellagotannins, which are effective in preventing initiation of esophageal cancer.

With more antioxidant punch than most other fruits, berries in general strengthen tissue defenses against oxidation and inflammation, which are underlying factors in most age-related diseases. For example, substances in blueberries help with short-term memory loss associated with aging. All berries help lower risk for breast, oral, and colon cancers in women. With a wealth of phytochemicals like ellagic acid, adding strawberries to the diet lowers tumor risk by up to 58 percent.

Yummy...
Thank you for recipes.