Anna Hazare's fight for change has inspired millions of Indians 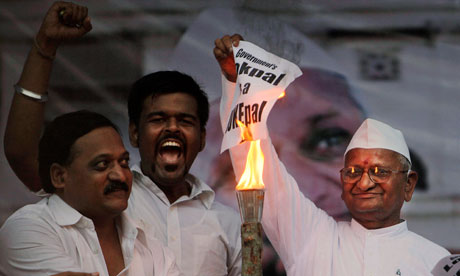 Anna Hazare, right, burns a copy of draft legislation for setting up an anti-corruption watchdog which is said to only cover 0.5% of government officials – he recently went on hunger strike for the second time. Photograph: Rajanish Kakade/AP

At the time I write this, millions of my countrymen are on the streets, fighting for a strong anti-corruption law. Many more are glued to their TV sets, watching developments as the initially defiant Indian government looks on track to eat humble pie.

This fight is led by Anna Hazare, a 74-year-old activist, who is on hunger strike until parliament considers the bill that would establish a Lokpal – ombudsman – with the power to investigate and punish corrupt politicians and civil servants.

Hazare had fasted in April and forced the government to agree to include his team in drafting the bill. His non-violent yet aggressive, Gandhi-like method of protest, together with his anti-corruption cause, struck a chord with Indians. Thousands of non-government organisations fight for social causes every day in India, but none has ever achieved this kind of support. From rickshaw drivers to software engineers, from businessmen to spiritual leaders, people from all walks of life back Anna. So do I.

This level of support is unusual here. The usual Indian response is phrases all of India's young are used to hearing from the older generation: "Nothing will ever change in this country", "nobody can touch the powerful", and "the common man is meant to suffer".

Cynics thrive in India, and they have ample evidence to support their attitude. After all, things have not changed much over the past five decades – governance is as incompetent and corrupt as ever, and the guilty are almost never punished.

Archaic laws, designed for autocratic, colonial rulers with no accountability (yes, blame the British for everything) have been retained and abused to the hilt by the current politicians. Power talks; truth and justice are often crushed. We remain a poor country, despite having world-class talent and ample natural resources.

And yet, something is different about India's class of 2011. Despite all the Uncle Cynics, people from all walks of life came forward to fight for the bill. From their parents' generation that said "nothing will ever change", they came forward to say: "I am the change."

I had spotted this desire and aggression in the young during my travels as a speaker in 50 Indian cities over the past two years. I could sense a disconnection between the aspirations of the young and the leaders. I never imagined a 74-year-old could tap into it so well.

Yet, even though the government agreed to engage with Anna in April, it backtracked and insulted, ignored and snubbed his team during the drafting of the new legislation.

The government made a lame, impotent bill of its own which covered only 0.5% of the government's officers, and disincentivised whistleblowers. The government hoped that with half of India illiterate, and most of the other half ignorant, nobody would know the difference.

Disillusioned, Anna threatened to start another fast on 16 August. The government played shady games, like not giving him a venue or not letting him set up a tent in the rainy weather. Support grew as people witnessed the government's hubris on television.

In a serious lapse of judgment, the government arrested Anna from his home on the morning of 16 August. News spread, and the nation exploded on to the streets. By evening, the government wanted to release him. In a masterstroke, Anna refused to come out of jail, and continued his fast there. The country is in a frenzy, and the government is in a fix.

The ruling class, most from three generations ago, are bewildered. They don't understand movements going viral, with social networks acting as catalysts. Seasoned politicians they may be, but they cannot fathom why students from the premier Indian institutes of technology and farmers from rural villages are backing this activist, who seems to have come from nowhere.

What's worse, the government cannot figure a way out. If it passes an anti-corruption law, many of its own lawmakers may end up in jail. If it does not, people will keep flooding on to the streets. The best outcome would be for the government to eat humble pie and bring Anna back to a real, equal negotiating table. Whether it will or not remains to be seen.

What has happened? How has a sleepy, defeatist India suddenly been galvanised into action? Why do our people, used to a feudal-colonial setup for centuries, suddenly want their politicians to be accountable, rather than treat them like kings? It is difficult to answer these questions at the moment, as we are still in the middle of the movement. However, a few things are clear: India seems to have suddenly woken up to an intense craving for the good and the honest.

With Anna's repeated success at shaking the government, it has also become cool to be righteous. The young generation, brought up to believe that power is everything, now sees a role model in Hazare, who is taking the mickey out of India's most powerful by goodness and virtue alone.

This mass infusion of morality in young Indians will be the biggest contribution of this movement, beyond the actual law. Truth has trounced power, and that does not happen very often in India.

On a flight from Delhi to Mumbai on 16 August, I teased a policeman at the airport security check. I asked him why the police arrested Anna in the morning. He kept a studied, official silence as he frisked me and stamped my boarding pass. As I left the checkpoint, he whispered in my ear: "Sir, my seniors may be with the government, but I am with Anna."

Chetan Baghat is India's best-selling English-language novelist and, according to Time magazine, one of the 100 most influential people in the world. Born in Delhi in 1974, he travels widely in his home country, often to small towns. His books deal with the lives, fears, aspiration and troubles of young Indians.