And today, Israel committed a massacre in international waters when its navy commandos stormed the Gaza-bound aid ships and killed at least 19 unarmed activists. 700 Arab and European activists were on board the boats with ten thousand tons of aids and supplies for the besieged Gazans.

"We are Italian, Irish, Canadian, Greek, Tunisian, German, Australian, American, English, Scottish, Danish, Israeli, and Palestinian. We are of all ages and backgrounds. We have years of experience volunteering in Gaza and the West Bank at the invitation of Palestinians. But now, because of the increasing stranglehold of Israel's illegal occupation of Palestine, many of us find it almost impossible to enter Gaza, and an increasing number have been refused entry to Israel and the West Bank as well.

We want to break the siege of Gaza. We want to raise international awareness about the prison-like closure of the Gaza Strip and pressure the international community to review its sanctions policy and end its support for continued Israeli occupation. We want to uphold Palestine's right to welcome internationals as visitors, human rights observers, humanitarian aid workers, journalists, or otherwise.

We have not and will not ask for Israel’s permission. It is our intent to overcome this brutal siege through civil resistance and non-violent direct action, and establish a permanent sea lane between Gaza and the rest of the world."

This is the motto and aim of the Free Gaza Movement which has sent the "Freedom Flotilla" of six ships to bring humanitarian aid to the Gaza strip only to be forcefully stopped by Israeli occupation forces.

Israel was quick to allege that the activists on-board the ships are ‘militants and extremists.’ "The flotilla of ships on its way to Gaza was an armada of hate and violence," charged Deputy Foreign Minister Danny Ayalon at a press conference on Monday morning. "It was a premeditated and outrageous provocation" and its organizers had ties to global Jihad, al Qaida and Hamas,” continued Ayalon.

Israel and Ayalon’s terrorists are in the eyes of the world prominent passengers including European MPs, authors, journalists, religious figures like former Greek-Catholic archbishop of Jerusalem, Monsignor Hilarion Capucci, leader of Islamic movement's northern branch in the occupied territories Sheikh Raed Salah who has been very seriously injured in the Israeli attack.

Among the volunteers whom Israel consider terrorists and extremists are

· Annekarijn de Jong (29),Weesp, Holland. A Dutch PhD researcher at the School for Oriental and African Studies (SOAS), department of Anthropology. Her research interest are popular protest, human rights and for her fieldwork research she spent 16 months in the Occupied Palestinian Territories, including occupied East-Jerusalem and Besieged Gaza.

· Inge Neefs (26), Ghent, Belgium. She studied educational sciences and holds a masters degree in anthropology. Recently, she spent three months in the West Bank as an activist supporting the "non-violent resistance" of Palestinians against Israel's military occupation.

· Hedy Epstein (86); St. Louis, Missouri, USA. She worked for the American government, first with the U.S. Civil Censorship Division and then as a research analyst at the Nuremberg trial.

· Katherine Elliott Sheetz (63), Mass., USA. She is a Registered Nurse with a master's degree in sustainable development. She has worked on human rights, health and food security, most often in Haiti.

· Caoimhe Butterly 31. She’s an Irish human rights activist & the Free Gaza Movement's Gaza coordinator. Caoimhe lived in the Jenin refugee camp for a year in 2002 before being shot by Israeli occupation soldiers, then deported. She has worked with human rights organizations, social movements, NGOs, prisoner rights campaigns and as a volunteer on ambulance services during the massacres in Gaza in December and January, and was a witness to war crimes and white phosphorous attacks, Caoimhe went to Gaza on the second trip in October 2008, then stayed as one of the two Free Gaza coordinators there.

· Mark Daly 37, Kerry, Ireland. He is an Irish Senator and a member of the Joint Oireachtas Committee on Foreign Affairs, the Seanad Spokesman on Overseas Development, the Deputy Government Spokesman on Innovation, and the Coordinator for the National Forum on Europe.

· Shane Dillon (36), Dublin, Ireland. He is an Irish Seafarer. He has served as Chief Officer on Irish and British merchant ships, and is now based in Dublin.

· Fiachra O Luain 28, Carndonagh, Ireland. He is an Irish Peace Activist. Fiachra was an independent candidate in the 2009 European election. He hopes to help build new consensus in Europe and the Americas about the gravity of the situation in Gaza.

· Alex Harrison (32), London, UK. She is a solidarity worker living between London and the Middle East. She lived and worked in Balata, Nablus in the West Bank during the intifada. When she tried to visit family in Palestine in 2006 and 2008, the Israeli authorities denied her entry. She is determined to return to Palestine and plans to work do long-term human rights monitoring in Gaza.


· Ewa Jasiewicz (31), London, UK, Poland. She is an experienced journalist, community and union organizer, and solidarity worker. Her articles have appeared in The Independent, The Guardian, Le Monde Diplomatique, Red Pepper, and Z Net, among others. She worked with the ISM in Palestine, and with Voices in the Wilderness in Iraq.

· Lubna Masarwa (32) is a Palestinian activist. She works as a community organizer for Al Quds University focusing on educational rights for the thousands of Palestinian children in East Jerusalem who have no schools. She also works with the community of East Jerusalem in their struggle against the Israeli government’s policy of ethnic cleansing Palestinian families through home demolitions and forced displacement.

· Huwaida Arraf (33), Ramallah, Palestine / Washington D.C. / Detroit. She is a Palestinian with American citizenship. She graduated from the American University Washington College of Law, where she focused her studies on international human rights and humanitarian law. In 2001 Huwaida co-founded the International Solidarity Movement (ISM), which has twice been nominated for the Nobel Peace Prize.

· Annette Groth 56, Berlin, Germany. She is a member of Parliament in the German Bundestag and Human Rights Policy Spokeswoman for the LEFT Party Parliamentary Group. She serves on the Human Rights and Humanitarian Aid Committee, as well on the Economic Cooperation and Development Committee.

· Inge D.M. Höger 59, Herford, Germany. She is a member of Parliament in the German Bundestag, serving on the Defence and Health Committees. She is the political spokesperson for the LEFT party.

· Matthias Jochheim 61, Frankfurt, Germany. He is a physician and psychotherapist. He is Deputy chair of IPPNW Germany, International Physicians for the Prevention of Nuclear War .

· Norman Paech 72, Hamburg, Germany. He is a LEFT Member of Parliament in Germany's Bundestag, as well as Professor of Public Law at the University of Economics and Political Science (HWP) in Hamburg.

· Mairead Maguire 66 Belfast, Ireland. She is a Nobel Peace Laureate (l976) and Co-founder of Peace People, Northern Ireland. She was awarded the Nobel Peace Prize for her work for peace and a nonviolent solution to the Ethnic/political conflict in Northern Ireland. Mairead has travelled many times to the occupied territories of Palestine to support the nonviolent peoples’ movement for Human Rights, International Law, and Self Determination of the Palestinian people. Maguire was shot with a plastic bullet whilst participating with Palestinians/Israelis/Internationals in a peaceful protest March to the Wall in Bilin, in April, 2007. She was on Board ‘Spirit’ when Israel hijacked the Boat in International Waters, taking all 2l humanitarian passengers to "Israel", where they were arrested, detained for a week in an Israeli prison and then deported.

Those and many other Nobel Prize-awarded activists were onboard the flotilla who came from several countries to stand with the Gazans and express solidarity with the besieged people. They are not terrorists, they are not extremists, they are not militants, they are people who denounce tyranny, Israel’s tyranny. 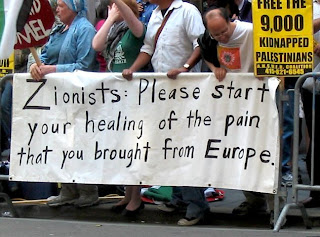