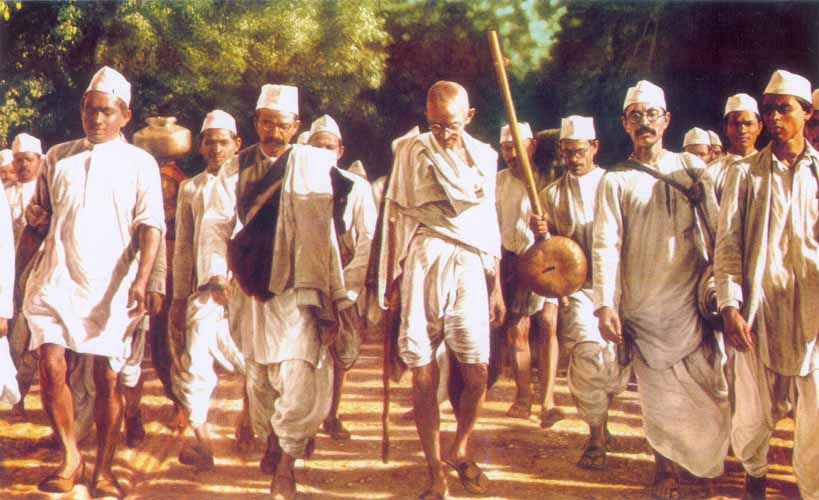 Gandhiji with his followers on the March to Dandi in March 12, 1930

April 6,2012 is yet another red-letter day in the history of India, when the nation witnessed the re-enactment of historic Dandi March by Mohandas Karamchand Gandhi 82 years ago to protest the British rule for taxing natural salt. It was on this day in 1930, Gandhiji had started the historic march from Sabarmati Ashram with 78 volunteers for Dandi, a village on the sea cost in Gujarat. The 25-day march through dusty and muddy tracks culminated on April 6, 1930. As the march continued, people saw the changing history of the world. It was the whole of India rising up with rekindled enthusiasm and faith.

Gandhiji began his march at 6.30 a.m. on 12th March 1930 accompanied by his 78 Ashramites. It was a historic scene, calling back to our minds, the old legends coupled with the mythological names of Lord Shri Rama and the Pandavas. Motilal Nehru compared it to the march of Shri Rama Chandra to Sri Lanka in search of Sita. While C.F. Andrews regarded it as Moses leading the exodus of Israelites, Americans compared the epic march to Lincoln’s decision to maintain the Union and his sending troops to the Southern States. And all this, by one frail unarmed man at 61, challenging the then strongest empire.

In an effort to amend the salt tax without breaking the law, on March 2, 1930 Gandhi wrote to the Viceroy, Lord Irvin: “If my letter makes no appeal to your heart, on the eleventh day of this month, I shall proceed with such co-workers of the Ashram as I can take, to disregard the provisions of the Salt laws. I regard this tax to be the most iniquitous of all from the poor man’s standpoint. As the independence movement is essentially for the poorest in the land, the beginning will be made with this evil.”

Mahatma Gandhi had undertaken the 241-kilometer march on foot from Sabarmati to Dandi with a disciplined band of non-violent Satyagrahis, which later converted into a bigger movement against the British throughout the country. The road was watered, the path was strewn with fresh flowers, green leaves and decorated with flags and festoons as the Satyagrahis walked. Crowds gathered everywhere to witness the march and paid homage to this strange army and its general amidst the chanting of Gandhi’s favourite bhajans including – “Raghupati Raghava Raja Ram Patitapavan Sitaram.” Gandhiji addressed the people and ignited the fire of patriotism. During his march he declared that he would either die on the way or else keep away from the Ashram until Swaraj was won. His march lasted 24 days. The real significance of the historic march was to break all “tyrannical and unjust” laws of the British Government. Dandi march was just a symbolic start to the Civil Disobedience movement that began immediately afterwards in all parts of the country that shook the British Empire.

The march was widely reported and anxiously watched all over the country and abroad. Each day added to the fervour and enthusiasm. As many as 300 village officers tendered their resignations from the area through which Gandhiji passed. Gandhi had said earlier “Wait till I begin. Once I march to the place, you will know what to do.” He had a clear vision of this scheme of resistance when others were in the dark. The effects of the Salt march were felt across the country. Thousands of people made salt, or bought illegal salt. This period is to be considered the apex of Gandhi’s political appeal as the march mobilized many new followers from all of Indian society and the march came to the world’s attention.

By means of such non-violent tools, Gandhiji was not only instrumental in bringing about India’s Independence from the mighty British Rule, but also provided inspiration to the people in British colonies elsewhere in Asia and Africa to work for their own independence and the British Empire ultimately crumbled like proverbial house of cards. Gandhiji’s principle of Satyagraha or the force of truth has inspired generations of democratic and anti-racist activists including Martin Luther King Junior and the legendary South African Apartheid movement leader Nelson Mandela. Gandhiji had often stated that his values simple, drawn from traditional belief: Satya (truth) and Ahimsa (non-violence.)

“On bended knees, I asked for bread and I have received stone instead.” This is what Gandhi remarked, when he set out on his Dandi march. After breaking the Salt laws on 6th April 1930 by taking a lump of salt, Gandhi declared that with the breaking of British law, he had shaken the foundation of the British Empire. Gandhiji’s words proved true and ultimately led the British to quit India.

Hectic preparations have been made for the re-enactment of Dandi march, traversing the same path taken by Gandhi. The Platinum Jubilee celebrations have been organized to convey that Gandhi’s ideology remained relevant even today. Mahatma Gandhi’s grandson Tushar Gandhi, who is the Chief Trustee of the Gandhi Foundation, had conceived the idea of re-enactment of the march. Congress President who is also the Chief Patron of the march, inaugurated the event on 12th March 2005 by administering a pledge of communal harmony and development to the volunteers, who included freedom fighters, their successors, women, students and youth. Some of the freedom fighters, who were present at the assassination of Gandhi in 1948, also participated in the march in various parts of the country. The salient feature of the re-enacted Dandi march is the participation of several foreigners.

Gandhi’s other successful strategies for the independence movement included Swadeshi policy – the boycott of foreign made goods, especially the British goods. Linked to this was his advocacy that all Indians should wear Khadi – homespun cloth, instead of relying on British textiles. His stance on India’s independence hardened after the Amritsar Massacre in 1919. On May 8, 1933 Gandhi began a fast that would last 21 days to protest British oppression in India. Gandhi felt that if the British were not prepared to combat the various “evils” afflicting India under colonial rule, he prepared to commence a fresh campaign of Civil Disobedience.

Gandhi’s philosophies and his ideas of truth and non-violence had the influence of the Bhagavad Gita and the writings of Leo Tolstoy. He was also inspired by Henry David Thoreau’s famous essay on Civil Disobedience.

Salt, which was the coin of currency in China became the currency of Civil Disobedience movement leading to liberation of India. The question is not the quantum of levy on salt and the commodity. The British did not even spare common man’s commodity, which became the symbol of protest in the hands of the Man and the Mahatma.

Gandhi is a great inspirator for all Peacemakers.

May his soul inspire you and Humanity again and again.