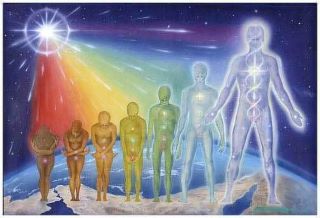 So very often I hear people talk about "D"s... What D is this.. What D is that
I hear 3D earth ascending into 5D earth which often doesn't make complete sense to me...

It's because we all have different "scales" of reference points when referring to the places in spirituality we can be.. My reference points base on what I've Learned from The RA material and one form of quantum theoretic dimensions.

On Dimension in the quantum theoretical world (please watch... And watch it again some other day, it will make more sense... But it will make this discussion more logical):

From this understanding we see dimensions more as a way that you can perceive things, this lead me to figure out that the human mind is 6 dimensional, for you can travel to any occurrence in time on any time scale. For instance, imagine what it would be like if you were unbelievably rich... You can see what would happen (for instance: now) if you had won the lottery 5 years ago.
Nothing says that it would be exactly so, but it is certainly a possibility, Due to the choices you could have made there is a wide variety of what could have happened. In between, you could become maniacal with your money and influence or really humble... And you can bend the 5th dimension with your imagination to visit all these scenarios and learn from them all the same.

Now we will look at the scale of places in spiritual evolution you can call "densities".
The way you could imagine this is as follows: Your soul came directly from source and had all the possibility to learn and be itself. All it's ever been, though, is one with everything and has no difinitive state, it agrees with everything and everyone because it knows they are the same as it, the same thing.
At some point it realizes it must cut off its awareness of that state of "oneness" in order to become aware of what it in its true state of individual self is capable of. As creator/co-creator it must mingle amongst the other-selves with its own free will choices based off what it knows from "past" experiences... (the past always defines the now so it's really present.) and learn through making its own choices, what can I be?
So it decides to forget, and become a dense state of existence, a physical being.

The First Density (muladhara - root chakra - earth)
The firstity being exists... On the densest state that existing could possibly be, existing physically. The first density being takes form of the four elements, this can mean early on you were once a gust of wind, a snowflake, a crystal, a puddle, a pebble or a cloud. Pure matter itself is an incarnation of a soul, be it a crumb of your particle board or a boulder in your garden.
What the first density being does, is learn how to exist on a physical vibrational level.
Soon, the soul becomes aware of what it's doing... Keyword AWARE! This is like the defining waypoint between the first and second density being... Awareness.
Also, see how this corresponds to your root chakra.

The Second Density (Swadhisthana - sacral chakra - Water)
When you add water to earth, you get life. Plants grow, species of creatures are born... And all these things share a few things in common, they grow, they reproduce (sacral) and they are aware.
A plant can react to its surroundings, it can tell when you cut its neighbor down and when fire is n... Trees heal wounds with sap. This place in spiritual evolution is for the soul who has gained awareness in what it is doing and wishes to learn different things from incarnating... For instance "I wanna be one of those things that crushed me as a rock" and it is born a tree. "I wanna be one of those things that grew up me" and it is born as moss. "I wanna be one of those things that was crawling around on me everyday" and it is born an ant.
The second density being is so aware of its surroundings and immersed in them, it sees no barrier between itself and the world around it, animals usually do not recognize themselves in mirrors. They are sill in deep connection with the creator all around them.
This is because they are not self aware, they do not think they are any different from the world around them and live by simple patterns of eating, protecting... And so on.
An area where second density beings can attain self awareness, is by being a pet. By owning a dog or multiple dogs you are teaching them that they are individual, you give them different names and treat them differently according to their actions. This teaches the dogs "who I am in the world" helping them become self aware.

The Third Density (Manipura - solar plexus - fire) <you are here>
This is the density of self aware beings, like dolphins, some monkeys, some house pets and humans. The illusion and challenge here is seeing yourself in the mirror and recognizing a distance between you and others. Here you define your actions as part of a social sphere with those all around you (solar plexus). This density allows for the greatest lessons to be learned, for you are still in the deep confines of physical boundaries... like a game there are no cheats or shortcuts to ;)
Here we struggle to see ourselves in everything around us again, like in the good ol' second density days, but with the new twist of being able to make friends and enemies and so on and really decide what to do and who to be in the world...
What we want to do now is gain consciousness of the universal love that connects us all, always, being compassionate and what not... and in this vibrational shift we are moving to the..

Fourth Density (Anahata, heart, air) < you might be here or headed here >
The fourth density being is aware of the cosmic love everything is made of, it can manipulate things similar to the way neo can in the matrix. Healing, levitating, seeing other layers of reality and even changing the vibrational state of their own body to pass through walls or physically go unnoticed. This comes through understanding what this matrix of atoms works on and stuff... I cannot really go into detail there for I cannot directly manipulate things.. but it is like a matrix of atoms rather than pixels.
By learning to be compassionate and loving you also learn to understand the workings of the world around you better... I don't know what more to say about this density but we can certainly speak of it.
Also, you can see how the elements of the chakras become less and less dense, at this stage it is air, clear and invisible but you can still feel it's there... your lungs also correspond to the heart chakra and it is what you use to breathe.

Letting someone burn their hand on the stove to learn something

Not doing things for people with your capabilities

Ensuring peoples' free will through your actions

These beings manifest their own food in a form of light broth, they can travel through time physically, but would never do so to induce change upon the world. Only to procure their own lessons and to teach beings already asking for their help... but never to directly alter the course of history for their cause.

Sixth Density (Ajna, Brow, imagination, I MAGI NATION)
The sixth Density being is a social memory complex, and thus a collection of many minds/souls/aspects of self. One is made, for instance, by many 5th density beings who share their thoughts and experience with eachother, they refer to themselves as "we".

I also believe that your higher self is a sixth density being comprising of all the aspects you've been in all the lives and incarnations you've been. Many reality shaping beings like mages, and your imagination is the connection to them all, the I MAGI NATION, you are a nation of magicians.

Sixth density beings are commonly regarded as the gods, they are the souls of our planets and they are the ones who create planets and stars. They reach back to help themselves as your "higher self" but will never influence you directly or infringe upon your free will.

They can appear as anything they want, and whatever is most appropriate for the time, usually they are an orb of light that takes form.

They do not have much of a sense of identity... but like I've said, not much is known of them.

This my own theory, but this density of being is what I believe one universe is... an eighth density being, and it is what your higher mind is... imagine yourself as a realm where everything you ever create in thought or know... exists... when you are evolved to the point of an eighth, and it all compresses into a point and explodes like a big bang, as your new body, and you can then experience all the things you are in different constellations for as long as it takes.

Beings from other universes can explore you, perhaps like a germ would explore your human body... and that enriches your experience.

There are no firm gaps or borders between densities... each density is to quote: divided into 7 sub-densities, and each sub-densities into 7 sub-sub densities and so on, infinitely until there is a special little box where you are.
Then again, it is always healthy to look at people as being "places" in spirituality... some may be in a swamp and some in a deep forest...(or something like that.)

We can use the Dimensions as how perceptions of each density can be... for instance...

A fifth density being can visit the past physically, can propel itself into the future and on different planets.

A seventh density being is thusly capable of bridging the connection between two universes (putting it REALLY short and simply).

Who knows what is beyond? only infinite intelligence: the divine creator.

NOW! you have read this far :D and I hope you've enjoyed the experience and that you were able to take something with you...

In my opinion, we are third density beings evolving to a five dimensional awareness, so, in effect, yes we are going from 3D to 5D... but those abbrevations are so similar that there can be misconceptions abroad ;)

This isn't to say, however, that your concepts of and Ds is wrong! And this is where I would like to open the forum :D

It would interest me what your "scale"of the "D"s are.. I've heard a few and it would be interesting to know yours...