Prepare a tall cup of coffee if you plan on reading this long post....

I'M NOT A JOURNALIST, NOR A DOCTOR OR NURSE. I am not an expert, but a normal person who happens to be American living in Italy. All I can do right now at this time of Coronavirus is to tell you what has happened here, in simple terms, perhaps on a more humanistic viewpoint, definitely not a scientific one. It may be of help, and that is why I am writing it.

When this new virus began, all of us were doing our normal lives: going out, getting together with people, stopping at any bar for a coffee, hugging friends with the Italian kissing of the cheeks, as we always do here.
We started to hear about the first cases, and there were lots of newscasters on tv who began the news with alarming tones of voices, louder than usual, and very serious expressions. This, to many, was exaggerated and out of place. With social media, we began seeing posts that were written by this doctor and that one, virologists, scientists of all kinds, and then the politicians started arguing and pointing fingers at who did what wrong and why this all began. Of course there were those thinking this was started as a complot. Friends and acquantances would send chat messages with their viewpoints, but during this time, all of outside life continued here in Italy. Parties, events, courses, choirs, get-togethers.

The non-stop news got some thinking that it was all an exaggeration. People were blamed as fear-mongers, those who feared and those who were partying at any occasion. There were also, curiously, many who looked at this as a "sfida", a challenge, as if looking fear or possible death in the face was the way to go. Needless to say, Italy is famous for having so many varied opions, politically it is a complicated country, so much so that one thinks twice before inviting people to dinner just in case they are from the other side....

So.....while the numbers of contagious people started to climb, people started taking advantage online with the sale of overpriced masks, sanitizing gel (I saw 500ml for over 600 dollars, YES!!) and...people were buying!! I saw that that product sold more than 30 pieces!! Is this insanity?
Fear, insanity, obsession....but the word that hadn't gotten out yet was that this was going to turn into something that many now call "surreal".

Hospitals started to have problems fitting all patients into their structures, and this news got out, but still, socializing was full blast here until only recently.

There were SO MANY VIEWPOINTS and so many posts, and so many "experts" that people were complaining about this!! TOO MUCH INFO, I AM CONFUSED!!

People didn't know what to buy, how much to load up in their freezers, and masks and gel were getting bought up and stores were out of them. Whoever is an anxious person, this is a great time to become anxious!!
All one would hear out on the streets was talk about this. Cartoonists and artists were coming up with some interesting cartoons, and it was a way to take a breather from all of this mess, even for just a moment.

In the meantime, families were getting obsessed in talking only about this (let's say, it was something that was overpowering here at home, our lives was becoming THIS) and I knew that that was not going to be a good thing for us, mentally and phyisically. Having a daughter in China, my thoughts were first about her, then, her thoughts were beginning to be about us.
The families probably, like myself, would think that others were worried for them, and that too became a new stressful thing.

In the meantime, numbers started to rise and rise and certains towns were overpowered with cases, and hospitals did not have the amount of equipment nor the beds to host all of them. Fear started to set in, rightfully. Elderlies were told that they were the main "target" and to stay put. For sure this created lots of concerns. THEN schools were closed here, with the much heavier outbreak that put entire regions in great danger. People definitely criticized this, and even hearing all this negativity was not pleasant. We need to continue something positive in our lives, even in the midst of all of this.

Older school kids started taking advantage of schools being out, and one of the more popular bars in town (pastries, pizzas, coffee, cokes, whatever...including wine) would be FULL with tables outside and in, always full, and nobody respecting the one-meter distance that the government said should be respected).

In Milan, and in the regione of Lombardia, people were told to stay at home. But while this was happening, and the museums and schools were closed, and events cancelled, an advertisement came out by a ski area saying "School's out? Come enjoy yourself on the snow!!". So....we saw pics of people on the snow, in lines, in the mountain top restaurants, enjoying themselves,...close as sardines, having fun, during the coronavirus!!
Not only that....but in the middle of the night, lots of people from Milan took off and just left Milan to go to the sounth of Italy to their parents most likely, and grandparents, where, if they had the virus, would show up on their doorsteps with a VERY NICE PRESENT!!! Unwrapped, but nevertheless, a present: the Corona!!

Now.....just the other night, the President del Consiglio, Conte spoke to Italians on tv. Basically, our regions are on lock down. We cannot go from our regione (Umbria) into another region. Just the other day I had gone to the lake, strangely enough, with two of our Chinese student guests. It was a gorgeous day and I am so glad we enjoyed it. Now, I cannot go there, because it is in another region. We can ONLY go out for work, or for health reasons, and we must have an autocertification to show to police if stopped. It states where we are going and why.

Meantime, at home, I am trying to clean everything in a more disinfective way, and I plan on having new rules to go by, even in my own home, for our health. I have an exercise plan, to stay in shape, and am doing things that I have to take care of, as well as having plenty of time to do more cooking to stay well and happy, AND paint. There is lots of time to do everything now. Important to not get too involved in all the news, because it can be overwhelming.

I realize, and it is so easy to realize this, that when the first contagious germs get into a country, they will travel. More well-known people are getting this virus, and we keep up daily with following CNN and other news, as well as watch the news at night. The rate has trippled in the USA since yesterday. We don't know if the number in Italy still will grow as it has, since now these precautions have been taken. We have to see what happens. In the meantime, now people have taken it more seriously.

Some are very concerned, either for themselves or for their children, or elderlies. it IS hitting all age groups. Perhaps the news has not told us more about this, for some reason. I hear stories, even from personal friends that are pretty scary. Mostly the message is, if people don't help to keep this contained, the hospitals will not be able to take care of all people and choices will have to be made. it is not a nice situation. We all have to do our part.

AND THIS PERHAPS IS THE NICE PART OF THIS STORY....it seems that people, at least some, are realizing that staying at home and being careful is the step to helping all of Italy, and also in helping the world. We are a unit, we are together in this.

And there have been lots of beautiful gestures, from China and not only. Many well-knowns have given money to help the major hospital in their fight for this virus. And many posts from nurses and doctors, have warmed my heart, to see the dedication and risks that doctors have been taking in order to help others. This is something that is overwhelming, humane, and incredible to see. Chinese opera singers have made a beautiful video in which they are all singing a part, and in the end they wish Italy "courage and luck", and I found myself moved to tears.

We don't think about it, but now do, how people who work in shops, or even office workers, or ANYBODY is at risk. There are many rules to go by, check them out on the web and prepare yourself mentally for this challenge.

As some of the posts have said, people are complaining about not being able to go out to drink, or go to a football game. Is it possible that people are so egotistic??? While doctors are risking getting the virus in order to take care of others....let's learn from their altruistic behaviour!!

People, Americans, or whoever is reading me here. Remember, I am not an expert. You are going to be submersed with opinions, posts, news, advertisements, tv, etc etc. It is going to feel like WAY TOO MUCH. And it will be.Just get informed by the experts and think logically about things. Be prepared but without obsessing. Good luck. We really are in this together, and perhaps this is the only good thing that is coming out of this world problem, a sense of unity, somehow. 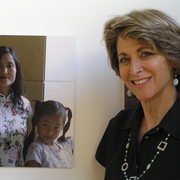 my grand daughter is 26 years old. she works on the front line in a London hospital. Last Wednesday she had the fever and a severe headache. She had the virus. Today Monday she is well again and about to return to work.. Really this seems to be the norm except for ill or elderly people.

insightful... thanks for sharing Eva & Stephanie !

To everyone....  if you have not yet grasped it, the attempts to slow down [at best] the spread of this infection ....is to relieve the otherwise outrageous impact [on everything[ a fast spreading infection will impose on supplies, facilities and manpower...

As it is, it is likely to be equitably sustainable....

Eva....  posting Stephanie's letter is a great loving gesture of the sort we would expect of you ....were we to have expectations.  Otherwise we would just love you...