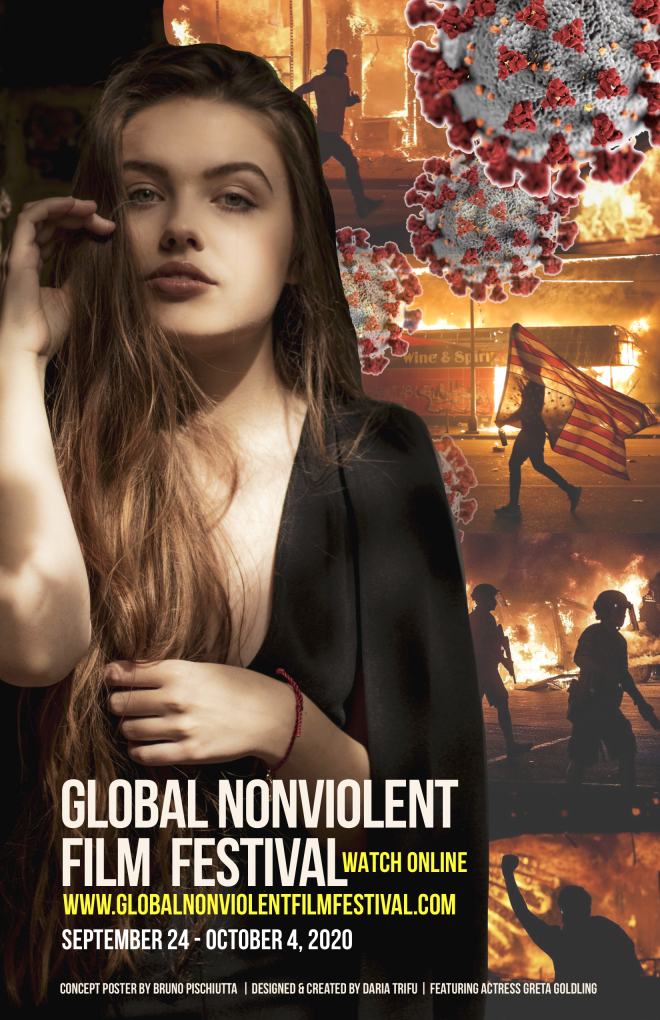 The poster is created on a concept by film director Bruno Pischiutta, and it features actress Greta Goldling. The original artwork, realized in digital collage method, was made by Daria Trifu.

“The poster advertises the Festival. It is also a freeze-frame that identifies the present year; it will stay there forever and it will be seen for years to come.

Until now, 2020 has been marked by two historical elements: COVID-19 and the social unrest in America. The people who will view the poster twenty years from now will not need to read the date of the event, but they will be able to visually identify 2020 as the year when this Festival’s edition took place. 2020 is also the year that marks the debut in the international film industry of actress Greta Goldling who, in this picture, reminisces a young Angelina Jolie,” said Bruno Pischiutta, who also serves as the Festival’s artistic consultant.

Global Film Studio owns the Global Nonviolent Film Festival and Daria Trifu, who is the Company’s president, had this to add:“We live in a digital world. For our business, it’s never been more universally clear that expanding virtually is the right choice and the best use of resources. Our Company chose this path early, in 2016, when we decided to take our already successful traditional local film festival on-line exclusively. We closed our physical screenings and moved the whole event on-line; it was a bold move that could have gone two ways.

In 2021, Global Film Studio is launching GlobalCinema.online, its own OTT streaming platform. GlobalCinema.online will showcase feature films, shorts and documentaries to paid subscribers. Some films will be available on a pay-per-view basis so that the platform will be able to host premieres and limited time releases too. Global Cinema will be a competitor to Netflix, and it aims to bring to the world viewers top quality films in every genre with a special focus on non-violent content. The film catalogue will include some of the best movies presented at the Global Nonviolent Film Festival.

And what about Corona?